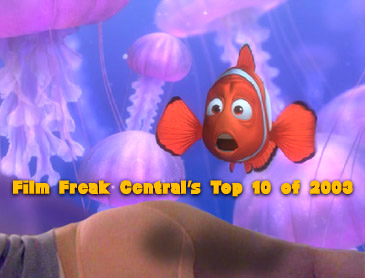 January 1, 2004|Stained by the twin horrors of school shootings and 9/11, the films of 2003 (many of the best of which are actually 2002 films that didn't find a release slot until this year) are interested in listlessness and languor, in addressing what appears to be a national ennui where the worst are filled with passionate intensity and the rest of us are spectators. Declared the worst year in memory at the Cannes Film Festival by any number of wags, 2003 was instead, I'd offer, deadened by a sort of fatalistic nihilism that bleaches our entertainments with a grey wash, making it difficult to muster much in the way of enthusiasm on the one hand and comfort on the other. The splashiest of the year's best films, in fact, are about revenge and noble sacrifice, while a trio of strong pictures (Dogville, The True Meaning of Pictures, Rhinoceros Eyes) have been pushed back to 2004, transforming this year's wrap-up into something of a patchwork creature. Stepping back, it seems only right that it be that way.-Walter Chaw
WALTER CHAW'S TOP 10

Manifesto: Bucking the popular thought pattern, I'm not inclined to include documentaries in a separate category, because though some may talk themselves into the idea that documentaries are not films, the fact remains that "yeah, they are." They're lit, directed, sometimes scripted, always edited; choices are made, subjects are culled, and points of view are catered to and manipulated. Sending documentaries to a gulag, a kid's table, denigrates the skill of documentary filmmakers and their achievements--akin to creating an Oscar category exclusively for animated features. (Oops.) It stinks of narrow thinking and irrational fears of a level playing field--in an honest world, the Best Picture category wouldn't come with asterisks.*

*That being said, there are four documentaries in two slots on my list.

Confession: I haven't seen The Company, The Fog of War, Millennium Actress, or The Statement.

Honourable Mentions: Bunny, Dracula: Pages from a Virgin's Diary, Raising Victor Vargas, The Son, Lost in Translation, Bubba Ho-Tep, Owning Mahowny, Peter Pan, In My Skin, Soft for Digging, Open Hearts, The Station Agent, Master and Commander: The Far Side of the World, and Bright Future.

Dishonourable Mentions: Mystic River, Cold Mountain, The Lord of the Rings: The Return of the King, Seabiscuit... essentially four-fifths of what will probably be the Best Picture nominees in one of the most dispiriting mainstream "prestige" years in years. A nomination for Lost in Translation in the annual "wild card" slot would give something to root for, but for all that, it didn't even make my top ten. Le sigh. Oh, I also didn't like American Splendor.

10. Finding Nemo
A fascinating parable for these modern times, Pixar's Finding Nemo locates its hero as a father moving his family to a bucolic suburb only to find that there is violence there as well. The limitless ocean becomes a metaphor for a father's fears, the confines of an aquarium (in a dentist's office, natch) allegory for the restrictions placed on the potential of an overprotected child. With every character in the picture's impossibly beautiful drink a victim of some sort of mental illness, Finding Nemo is subversive and dark but also hilarious and affecting. Though Pixar's lack of respect for its own intellectual property is damning (a line of dialogue is changed on the DVD without notation or cause), there's no escaping that this is the kind of delicate crossover balancing-act as useful and appealing to children as their parents.

9. In the Cut
Symptomatic of this year, one of its best pictures is also one of its most widely derided and ignored. Meg Ryan finally embraces her public persona (as opposed to her screen persona) in what is at its heart a distaff Se7en: a dark fairytale that is, like so many pictures in a dark year, surprisingly hopeful at its end. Jane Campion's In the Cut is a film in thrall to the power of words, floating in and out of reality with the creative assuredness of an artist at the height of her skills, orchestrating an intoxicating jig between sign and signifier. A beautiful film in thought and practice, In the Cut is something of a modernist masterpiece, one already due for a critical resurrection--perhaps it'll find one off the shelf.

8. Rivers and Tides/The Same River Twice
Possibly the best film ever made about an artist and creation, Rivers and Tides astonishes with its quietude and the attendant understanding of structure as it guides the gifted eye in sculpture and film. A slow-evolving piece, the best moments therein find artist Andy Goldsworthy forming eggs out of layers of slate and nests from driftwood at the edge of a whirlpool--murmuring all the while about the mysteries of completeness and, on a grand scale, what it means to seek eternity in a temporary world. The Same River Twice tackles similar themes in the juxtaposition of a group of daytripping hippies and the upstanding professionals most of them would become. Each of them is looking by the end for a return to that eternal summer or, failing that, a means to touch the face of forever in the metaphor that a river represents.

7. All the Real Girls
David Gordon Green's second film builds on the promise of George Washington with a romance between two lost children in the middle of anywhere rural America. Surrendering itself to silence and the dulcet poetry of a doomed embrace, All the Real Girls is a little slice of perfect imperfection, so unaffected as to seem pretentious. The truth is that the picture, a genuine descendent of the lyrical naturalism of Terrence Malick rather than just a critically convenient shorthand for a certain kind of languorous cinematography, deals with authentic emotions in all their sloppy, frustrated glory.

6. The Secret Lives of Dentists
Alan Rudolph's The Secret Lives of Dentists finds Campbell Scott and Hope Davis engaged in the danse macabre of marriage amid the insoluble muddle of the day-to-day. A slow waltz through the rubble of boredom and low-level paranoia, the picture is scripted with a genius ear for dialogue and performed with grace and conviction. A look at the sacrifice and rewards of commitment in, again, that temporary world, The Secret Lives of Dentists (also boasting of one of the best non-Tarantino, non-Wes Anderson soundtracks in years) leaves echoes--and no small draught of hopefulness--in its long wake.

5. Hero
A film that Miramax has already cut and may never release, Zhang Yimou's Hero gives Jet Li his best, most nuanced role since Once Upon a Time in China and the martial arts genre a shot of contemplative Zen in its tale of a nameless assassin entrusted with the murder of the first emperor of China. The cinematography exceeding even that of Zhang's previous work, the film is an epic in the sense that The Last Samurai is not, and a period romance in the sense that Cold Mountain is not. Ravishing, stirring, Hero represents a resurrection in the Hong Kong cinema, in a deep depression since the heyday of the heroic violence genre. (To say nothing of the mass exodus of Asian talent to the United States.) Quite a shame, then, that it's been gathering dust for well over a year now.

4. Kill Bill, Vol. 1
Genre matters. Quentin Tarantino--Steven Spielberg with balls--fashions a film that works within its own moral structure, flinging itself bloodied against genre fences until a work of true filmic art emerges, pristine. Why this film was singled out for violence when Bad Boys II spends its last hour playing with corpses (and ogling dead breasts) while celebrating a mindless sociopath as its hero (played by Family Man™ Will Smith) speaks a great deal to the thrilling artistry and visceral weight of Kill Bill, Vol. 1. It's a film in love with film, drunk and delirious, and, no matter its achievements, still only half of the puzzle.

3. Capturing the Friedmans/Stevie
Two documentaries about guilt and responsibility, identity and perception, memory and reality, Andrew Jarecki's Capturing the Friedmans and Steve James's Stevie are virtuoso works about what it means to be a person of conscience seeking to be free of the sordid and the ugly. Pedophiles the problem in both, the two pictures walk the tightrope between truth and propaganda, questioning themselves at key points as to the ways that the filmmakers' own involvement has changed the film. In the case of Friedmans, the very nature of film is challenged as the subjects turn over hours upon hours of devastating home movies, documenting the last days of a father who's been accused of unimaginable crimes. The mood fuelling both is one of melancholy: a nostalgia for better times that never were, and a wish, futile, that if only someone had done something, somewhere along the way.

2. Spider
David Cronenberg's subtlest, best film, Spider is held together by the director's auteur obsessions and a performance by Ralph Fiennes that may be the most impressive of any this year or last. Ruinously mishandled by its domestic distributors, it made a splash on the festival circuit late last year only to be pushed into the February doldrums in North America. Doomed to be forgotten by our naked emperors of taste and culture, then, Spider is the kind of film that people complain isn't being made anymore: stately, beautiful, meticulous, and meaty. With a hero adrift and grieving losses real and imagined, the picture resists platitude and easy categorization--and repels, as a consequence, acclaim and box office even as it gathers momentum for posterity.

1. Elephant
Gus Van Sant's masterpiece, Elephant is haunted and haunting. Its telling of a Columbine-like event has no ending and no conclusions, only a series of overlapping images of youth at its ending that serves as an interesting look at our own country as it loses its innocence and becomes a member of an older, sadder world. Peopled with beautiful innocents, the picture is at once the height of realism and the pinnacle of poetry. Van Sant plays stereotypes like a master puppeteer, subverts expectations at every turn, and makes one of the definitive pictures of the United States, bellicose and blinkered, backing into the new millennium.