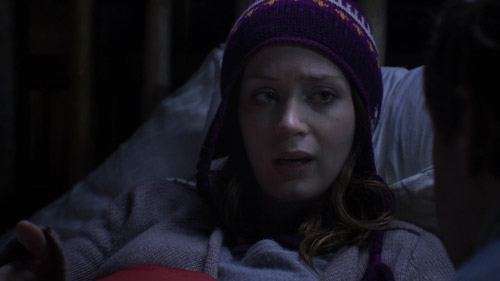 by Angelo Muredda Lynn Shelton tends to swim in the deep end of the mumblecore pool. More improvisatory than the scripted films of the Duplass brothers (despite their overlap in casting), her work, in an odd sort of way, is probably closer in spirit to Joe Swanberg's. Swanberg's shabbier DIY aesthetic masks the heady nature of his projects, which explore the same three or four ideas about modern relationships in forms as disparate as the anthology film (Autoerotic) and the meta-slasher (Silver Bullets). In Humpday, Shelton nicely marries her own high concept--to make a movie about hetero male insecurity writ large--with a pair of naturalistic performances that elude Swanberg's scratchier efforts. Her M.O. appears to be to let her actors fumble through a convoluted situation that, on the strength of their characterizations, never feels as unnatural as it probably should.

Your Sister's Sister is a less successful balancing act. Like Humpday's story of two old friends who mutually dare each other to star in a gay porno, this one starts with an artificially-charged situation. Iris (Emily Blunt) sends her unemployed platonic friend Jack (Mark Duplass, of the aforementioned brothers Duplass and Humpday), who's mourning the recent death of his brother (Iris's ex), up to her father's cabin for the weekend. Though the idea is to get some alone time, Iris's sister Hannah (Rosemarie DeWitt) turns out to already be there doing the same thing; fresh out of a seven-year relationship with a woman, she's not above sleeping with Jack after some heavy drinking. That Iris should show up the next day and shake up this new unit with her own secrets seems preordained, if not by the farcical nature of the conceit--two strangers in a cabin--then certainly by the structural parallels with Eric Rohmer's moral tales, which also place men of questionable character and spotty finances in secluded places overseen by smart women.

Duplass and DeWitt's spiky chemistry gives a welcome jolt to their impromptu first date, where we barely know more about Jack and Hannah than they know about each other. It's refreshing to have to rely on physical cues to get a feel for characters, and Shelton seems blissfully disinterested in whether we like either of these people. The Rohmer connection, or at least the built-in promise that things are about to get tricky, also unsettles these early moments. We're prompted to pay attention to seemingly insignificant details that will surely become important later on--and to the picture's credit, it's as tough for us as it is for Jack to get a read on Hannah's motives.

What disappoints is the manner in which those details turn out to be important. After the playfulness of the opening, the revelations tumble down in a clumsy shouting match that flattens the characters out into single-purpose tools in service of a surprisingly unimaginative script. The dividing line is so clearly drawn here that I'm tempted to be charitable and say that Shelton is making two separate films: an odd sex comedy and a standard-issue melodrama. If that's true, though, the second film just isn't very good. Shelton generally has a strong command of tone, handily managing Duplass's deficits, like his improv crutch of repeating a conversation partner's last line; at first, she uses him mostly as a foil for the more inscrutable female leads, to nice results. Blunt is especially good at registering Iris's ambiguities following a bombshell: Notice how she feigns openness in a tender scene with Duplass immediately after we've seen her show a very different set of cards to Hannah. It's difficult to square that complexity--as well as the elegance of both scenes, rendered in intimate two-shots--with the deflating and utterly ordinary montage that follows the big scene, set to composer Vinny Smith's treacly guitar strumming. Blunt and DeWitt skulk around their summer home and its surrounding woods like refugees from Cries and Whispers, while Duplass goes on a wilderness sabbatical before returning to drop a hackneyed monologue that elicits, of all things, a group hug. If this is the way these people handle full disclosure, you think, it's better they keep their feelings to themselves.

THE BLU-RAY DISC
by Bill Chambers IFC's Blu-ray release of Your Sister's Sister presents the film in a 1.78:1, 1080p transfer that probably isn't that much of an improvement on the concurrent DVD. The picture was shot using Sony's "prosumer" model the PMW-EX3, which yields an image halfway between Dogme95 camcorder and high-end HD. Especially as wielded by director Lynn Shelton and DP Benjamin Kasulke, who favour flattish, dim lighting that doesn't cause a lot of headaches when changing angles. Second-unit beauty shots of the glistening lake and its surrounding woods are exponentially sharper and more dynamic than the rest of it. The attendant 5.1 DTS-HD MA track is surprisingly crystal-clear (there's a reason the genre's called mumblecore) and warm, with Vinny Smith's score splayed across the soundstage like a comforter.

Extras begin and end with two feature-length audio commentaries, both headlined by Shelton. In the first, she is joined by actor Mark Duplass, while the second reunites her with Kasulke, Smith, gaffer Jeremy Mackie, and production designer John Lavin. Since Duplass is one half of the directing Duplass Brothers (sounds like a trapeze troupe), there seems to be an unconscious comparison of styles going on between him and Shelton, and they offer much insight into the pros and cons of improvisation. They also talk about how shooting the movie out of sequence aided the performances and even entertain the notion of a sequel. The group yakker, on the other hand, is a cluster-cuss--imagine trying to follow the various splintered conversations at a dinner party where the wine is flowing. Still, if you're an aspiring filmmaker, there is valuable wisdom and expertise to be gleaned from the din. Trailers for what feels like a cornucopia of Elizabeth Olsen movies--Peace, Love & Misunderstanding, Liberal Arts, First Position, and Sleepwalk with Me--cue up on spinup.