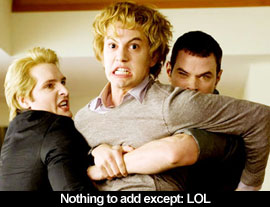 by Walter Chaw Let's play a Mad Libs game with Chris Weitz's appalling The Twilight Saga: New Moon (hereafter New Moon) and, by so doing, avoid talking about how a new moon is actually the absence of a moon in the sky, or how moon cycles remind me of menstruation, which would be a terrible thing to happen to heroine Bella (Kristen Stewart) around her boyfriend Ed (Robert Pattinson). Let's replace every time they say "do it"--and by that they mean "bite me and make me a member of the walking undead"--with "fuck" and see if this whole Twilight atrocity still appears the benign thing for your daughters to gobble up whole. When Bella implores Ed to fuck her after she graduates from high school, for instance, and Ed says that he won't fuck her until she turns twenty-one and they can get married...well, listen, this is a fairytale without any teeth, meaning it's a really, really dangerous fairytale. More, it's illiterate, invasive, moronic proselytizing from some Mormon housewife's blinkered belief system. Unconvinced? Consider that it's stated early on in this instalment of the saga that the reason Ed doesn't want to turn Bella into a vampire--oops, I mean, fuck her--is that he's afraid he'll damn her soul to eternal hellfire.

Twilight isn't one girl fantasy, it's every girl fantasy. The only way it could be any better is if Ed were a pony. Ed, because he wants to save Bella from evil vampires that will inevitably come to the little town of Forks to kill Bella in revenge for the shenanigans at the end of the previous film, sensibly abandons Bella to her own devices in the first ten minutes of New Moon. This doesn't, however, prevent him from appearing as a sort of Obi-Wan-on-Hoth apparition imploring Bella not to take a ride (or to, erm, cliff-dive) with a rapist biker until he finally reunites with her in Italy before a triumvirate of eurotrash Vamps ripped off from Anne Rice. It's the closest the picture will ever come to lore--and closer, as it happens, than it will ever come to presenting its heroes with anything resembling consequences. Sure, an entire tour group will get eaten off-screen as a punchline, and a half-dozen hikers will be fed to something so that Bella's sheriff dad (Billy Burke) has a reason to be walking around in the woods, but those are the chaff--the heathens, the casualties who die in steerage in this nihilistic aughty-age Titanic so that our Photoplay-ready cast can frolic along without a single thought in their head or a single graceful phrase falling out of their mushmouths. Seems that because Bella is completely vulnerable to attack, her new protector will be Jacob (Taylor Lautner), a Native American dude very sensitive to nature and, naturally, a werewolf. (Next movie? Bella falls in love with The Mummy but can't unwrap him until he's done with seminary.) Jacob is only sixteen, but that's, what, 112 in dog years? Bella's two-for-two in the gross object-choice sweepstakes. Jacob is also given to walking around without a shirt on in the rain and proclaiming his never-dying devotion to the incomparable Bella--so incomparable that men are evenly split between those who want to rape her and those who want to protect her. The exception is the Asian friend. The Asian friend is comic relief.

Chris Weitz returns to the director's chair following his oh-so triumphant The Golden Compass, working from a screenplay by Melissa Rosenberg, who helped adapt the "Dexter" novels for Showtime's terrible series of the same name prior to becoming the custodian of hack guerrilla televangelist Stephenie Meyer's handbooks on abstinence and the raw architecture of the Mormon faith. It's not much of a surprise, then, that New Moon is fucking godawful. No surprise, either, that it's going to be devastatingly popular, as it presents "Little Red Riding Hood" where the Big Bad Wolf not only doesn't bite, but wants to wait to bed Red even though she's ready to go, go, go. What could be more safe and Stepford sanitary than a 110-year-old monster cruising for high-school-age chicks and willing, after he catches one, to wait until their wedding night to collect his euphemized consummation? They depicted this scenario more honestly on HBO's Mormon soaper "Big Love" when Harry Dean Stanton harvested a fourteen-year-old girl.

All this fails to address that New Moon is a shoddy and poorly-acted piece of filmmaking. It's an embarrassment on every technical and artistic level, and watching it is a physical ordeal for anyone not already prepared to swoon over the beefcake and flush beneath the hackneyed melodrama. The dialogue consists of short, declarative sentences repeated at least twice ("I'm alive." "You're alive?" "Alive. And I'm here." "You're here?") and there's not one moment that feels like an authentic expression of a recognizably-human experience. This is a Barbie Dream House made by the Church of Latter-day Saints--a poison pill for the babysitters club that pain is for the damned/anonymous and salvation can only be had by embracing this jagged idea of the God that, not content to give corn to the Indians, is now giving it to your teenaged daughter as well. The irony in this movie about vampires is that the only thing doing any sucking is the movie itself. Originally published: November 20, 2009.