**/**** Image B+ Sound B+ Extras C
starring Kermit the Frog, Miss Piggy, The Great Gonzo, Michael Caine
screenplay by Jerry Juhl, based on the novel by Charles Dickens
directed by Brian Henson 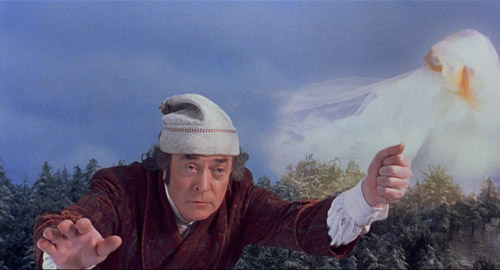 by Bill Chambers It's all but inevitable that the Muppets would take on Charles Dickens's venerable plug-and-play app A Christmas Carol at some point. More surprisingly, Michael Caine had not only not played Ebenezer Scrooge prior to The Muppet Christmas Carol (the role is like Hamlet for English actors who've plateaued), he had never before shared a stage with the Muppets, either. This despite his being, in the '70s and '80s, the exact calibre of star the Muppets pursued for cameos, and ubiquitous besides. He is, to my taste, not a harsh-enough Scrooge--there's an irrepressible compassion there when Bob Cratchit (Kermit the Frog) asks him for Christmas Day off. And The Muppet Christmas Carol frankly surrenders too much of the spotlight to this human character: If this were my first Muppet movie, I'd've felt especially double-crossed during his song number with the also-flesh-and-blood Meredith Braun, which was restored for the VHS and TV versions of the film kids have grown up with but is absent again on the new Blu-ray. (Former FFC contributor Ian Pugh tells me he "always, always, ALWAYS" used to fast-forward this part as a child.) It's almost cheating, to finally do the Muppet version of this tale and put an interloper in the lead, when the whole point of adapting it to a pre-existing framework is to match up the archetypes and balance that against audience expectations. It is, effectively, like getting to use characters as actors by casting them as different characters. This is also why Bill Murray works so well in Scrooged, because Scrooge pings off Murray's crabby, misanthropic '80s persona.

There's a bit of that going on in the film, of course, but casting Fozzie Bear as "Fozziwig" severely marginalizes one of the greatest Muppet resources--so much warmth, so much pathos--for the sake of an obvious pun, and giving Kermit the role of Bob Cratchit rather than Scrooge suggests an attempt to deflect the spotlight from new Kermit voice Steve Whitmire (who also does Rizzo the Rat) more than it does an artistic choice. Kermit could've pulled off Scrooge, too--he has a baseline exasperation with his social scene that could easily blacken into contempt for the human (or Muppet) race. Barring that, though he lacks marquee wattage, old Statler might've worked, with balcony heckling partner Waldorf as Marley, but instead the two split the role of Marley...and sing. (They stand up as well; the whole scene is perverse.) Gonzo as Dickens, with Rizzo as his sidekick, kind of works, however, for cleverly accommodating a beloved but misfit character while taking the piss out of Dickens, who demonized, y'know, "hook-nosed" figures in his writing.

Still, part of Dickens narrating the film was veteran Muppet scribe Jerry Juhl wanting to honour the novel's prose, which seems like a waste of a uniquely-qualified talent. Paul Williams, who wrote every brilliant song on The Muppet Movie's soundtrack, is similarly adrift: Where The Muppet Movie showcased a range of musical styles in a nod to the thematic undercurrent of cultural diversity, here Williams's contributions, perhaps hamstrung by the Victorian setting and the theatrically spartan production, are to a one generic showtunes with the odd inspired lyric buried in there (like when he rhymes Scrooge with "rouge"). Without Jim Henson, alas, the Muppets are always going to be something of a lost cause. It's not just that Henson's pipes were integral, although they were--and losing Richard Hunt around the same time cost this picture somewhere in the neighbourhood of a dozen discrete voices, including both Statler and Waldorf (which is another reason why "Marley & Marley" feels so ghoulish).

Disney survived Walt's death because by then he was a figurehead who'd shifted his focus from personally grooming studio product to expanding the corporate empire. Jim Henson, conversely, sold his company to Disney so he could concentrate on the creative details. The Muppet performers were together for decades, and Henson was both Fearless Leader and resident muse; many, Henson among them, have done interesting work independent of the brand, but a great band is a delicate ecosystem. The Beatles knew this; Led Zeppelin knew this; Van Halen does not know this. As The Muppet Christmas Carol is moderately successful in a Classics Illustrated sort of way, with non-canonical Muppets essaying the three ghosts who haunt Scrooge, maybe director Brian Henson should have left brand expectations out of it and simply carried on in the vein of his father's excursions into fantasy.

THE BLU-RAY DISC
Disney brings The Muppet Christmas Carol to Blu-ray in a release whose "20th Anniversary" banner makes me feel ancient. (It's secondarily, superfluously branded the "It's Not Easy Being Scrooge Special Edition.") The 1.85:1, 1080p transfer is nice, filmic, and richly saturated; boasting a pleasing grain structure and no obvious digital embellishments, the movie has undoubtedly been run through the telecine since its DVD debut. HD brings both optical and digital composites into relief, but what are you gonna do? A slightly bigger drawback is the on-again/off-again presence of black crush, though it, too, looks baked into the source. The 5.1 DTS-HD MA track has substantial bass--based on the subwoofer alone, you wouldn't necessarily peg this for a pre-digital mix--and excellent dialogue reproduction. Critically, voices sound healthy and "live."

Extras begin with two feature-length commentaries, one from "Kermit, Rizzo & Gonzo," the other from Brian Henson. Whitmire is particularly off-key, if that is indeed him voicing Kermit in the former; I'm assuming it is, since the arrival of Whitmire's Rizzo immediately displaces him. At any rate, lots of painful vamping from the trio had me immediately toggling over to Henson's yakker, in which he geeks out over all the various techniques he got to use in this, his directorial debut, before settling into an alternating rhythm of praising his collaborators and reminiscing about the experience. It's a pleasant listen--in some ways, this is one of those movies that's more interesting to WIKIPEDIA than to watch.

Also on board is a retrospective making-of, originally produced for DVD, called "Frogs, Pigs and Humbug: Unwrapping a Holiday Classic" (22 mins., SD). Flanked by Gonzo and Rizzo, Brian Henson is the de facto host and a good sport, but despite interviews with the likes of Dave Goelz and Whitmire, there's still entirely too much pretending the Muppets are real for my taste. I remember, as a little kid, seeing Jim Henson puppeteer Kermit in some behind-the-scenes special, and it did precisely nothing to diminish my enjoyment of the Muppets; Henson Sr. respected children enough to know that revealing the man behind the curtain would if anything deepen an appreciation of the illusion as opposed to shattering it. Worse, the piece is full of bad improv, as these unscripted Muppet appearances usually are. Caine, fascinatingly, is said to have thought Brian Henson did the other Muppet movies--the implication being that he wouldn't have said yes to the project, had he known otherwise.

Most of the "bloopers" in "On the Set - Blooper Reel" (3 mins., SD) are disappointingly prefabricated, but it's amusing to see a Muppeteer's hand still work in synch with his or her mouth on those rare occasions where a flub is genuine. "Pepe Profiles Presents - Gonzo: A Portrait of the Artist as a Young Weirdo" (5 mins., SD) is exactly as painful as it sounds, compounded by the presence of a new-era Muppet--the eponymous Pepe the Prawn--whose appeal historically eludes those born prior to 1986. We learn from in-character interviews that...oh, to hell with it. Lastly, Gonzo and Rizzo return to host "Christmas Around the World" (3 mins., SD), a brief educational segment that brings kids up to speed on global Christmas traditions, not counting the Finnish legend of the Yule Goat. HD trailers for Wreck-It Ralph and Santa Paws 2: The Santa Pups cue up on startup, and that's all she wrote--unless you count the intrusive "Disney Intermissions," as introduced on the BD of The Muppets, which bring up Muppet-performed Christmas carols any time the film is paused. A Digital Copy of The Muppet Christmas Carol is included on a DVD inside the keepcase. 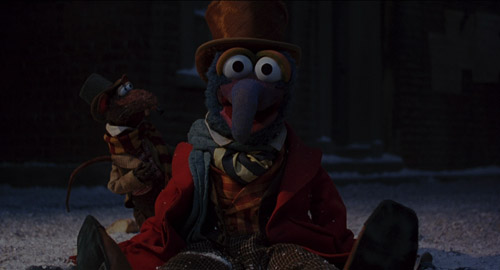