**½/**** Image A Sound A Extras B+
screenplay by Bob Goodman, based upon the graphic novel by Frank Miller and Klaus Janson
directed by Jay Oliva 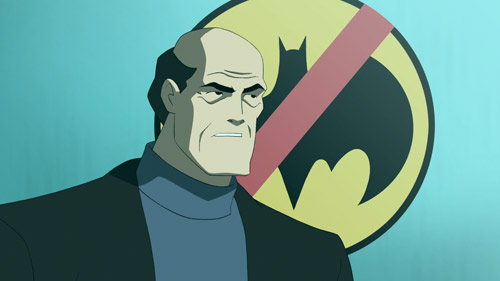 by Jefferson Robbins There's nothing left. Batman: Year One is so last year, The Killing Joke basically got turned into The Dark Knight, and "Watchmen" has become both a big-movie flopola and a prequel comics series. With Batman: The Dark Knight Returns, Part 1 on shelves now and its concluding Part 2 due on direct-to-video disc this winter, the DC Universe has basically wrung itself dry of compelling product from the '80s comics revolution that it can repurpose into features and animated editions. The bones remain for new stories, but the cost-benefit on original work vs. revivified fan favourites ever tilts towards the latter. Those of us who discovered or returned to superhero comics as a result of Frank Miller's and Alan Moore's mature deconstructions are seeing their final fruits. The only burning question is how many shmoes bought this package from Amazon thinking they were getting The Dark Knight Rises in half of a special two-disc edition.

That said, how is this cartoon take on Miller's most important Bat-work? The talented political crank fast-forwarded and roughened the character in 1986, envisioning a retired, post-traumatic Batman bursting back into battle against a new matrix of familiar social disorders--apathy, random street violence, a youth gang on the rise called the Mutants. The graphic novel crystallized the character as totemic, not a man in a mask but a larger animating force that possesses Bruce Wayne and, by extension, Gotham City. "The Dark Knight Returns" entwined itself deeply throughout every subsequent metastasis of the character in non-comics media, from Tim Burton's 1989 film to Paul Dini and Bruce Timm's 1992-1995 "Batman: The Animated Series" and its spin-offs to the more recent Christopher Nolan cycle. Smartly, director Jay Oliva and screenwriter Bob Goodman understand this. If they play "Dark Knight" as straight as, say, Sam Liu and Lauren Montgomery's DTV Batman: Year One, they risk looking cliché.

So they zag in a few places where Miller's now-canonical comics script zigged, toying with the iconography. At times, this works. In fact, many points where the script allows Miller's original tableaux to stand are among the weakest. In the tempestuous memories of the aging Bruce Wayne (Peter Weller), a very recognizable string of pearls snapped by gunfire now patters into a pool of rain, vanishing like teardrops. Seeking rejuvenation, a battered Batman imagines his boyhood mourning, confronting his costumed self lying in state in his murdered father's coffin. Yet the filmmakers aren't quite as willing to pull out all the stops as the source author was, and so they underestimate the psychodrama of the tale. Miller's portentous thought balloons aren't translated into voiceover--"Dark Knight" really did mark some of his finest pure prose--but that would be a tall order, and badassery, not complexity, appears to be Oliva's brief. Rather than embrace pathetic adversary Harvey "Two-Face" Dent (Wade Williams) in recognition of their symbiosis, this Batman cracks wise. The movie softens a confrontation where Miller's Batman straight-up gunned down a Mutant to save a kidnapped toddler. That Dark Knight had grown truly dark; here, it's a Marshal Dillon disarming shot. And so on.

By its context, the action takes place not in the present day but in some alternate 1986. There are no cell phones. A convenience store frequented by outgoing Gotham Police Commissioner James Gordon (David Selby) offers single-issue copies of Alan Moore's "Swamp Thing" and "V for Vendetta" on its magazine rack. The seventy-year-old Gordon lectures his incoming replacement Ellen Yindel (Maria Canals) about the ramifications of Pearl Harbor as if he was there. The parents of aspiring Robin Carrie Kelly (Ariel Winter) are hippie burnouts, reminiscing about their part in the '68 Democratic Convention riots. This story comes off as though two decades and change haven't passed, so Miller's deft social and media satire, when it's honoured, is past its expiration date. It's disorienting, since we expect the retired Batman to be either a future incarnation or a 2012 model. It's like a nostalgia trip for producer Timm and the DC Universe creators, living in a past when their beloved characters were vital and revolutionary.

Oliva and Korean animation house MOI excel at two things: the drifting, melancholic camerawork adapted from high-end anime; and action. Oliva proved his mettle in hand-to-hand combat scenes with the "Laira" segment of Green Lantern: Emerald Knights last year, and at times in the story's exposition, it's like he hungers to get to the beatdowns. The two set-pieces in which Batman confronts the animalistic Mutant Leader (Gary Anthony Williams) are wonderfully choreographed and quite brutal. (Trading blows in a riverside mire, the two adversaries punch the mud right off each other.) In terms of design, the characters drafted by Jon Suzuki and his team are faithful to Miller's, within the constraints of the animation--the figures who looked huge and imposing on the page are kind of thick on screen. What I mean to say is: Batman's calves are hilarious. The voice acting, helmed by Andrea Romano, is as airless and unconsolidated as a video game, as if afraid to misstep in reading a modern classic aloud. Peter Weller has a grand way with a monotone, but a monotone still only sounds a single note. This Batman barely raises his voice above a murmur, and there's no change of inflection between the masked hero and his alter ego. I'm not saying every Dark Knight has to gravel it up like Christian Bale, just that a disguise should go beyond cloaks and cowls. At least the casting, outside of Weller's role and Michael McKean (doing very well as a pompous psychiatrist), disregards DCU's recent penchant for star power in favour of practiced voice actors. That said, Selby's take on James Gordon sounds a little doddering--a far cry from the interpretation by "Animated Series" performer Bob Hastings, who made the Commissioner an energetic, authoritative older man.

THE  BLU-RAY DISC
Warner's 1.78:1, 1080p Blu-ray release of Batman: The Dark Knight Returns, Part 1, with an accompanying DVD and an on-demand Digital Copy, offers a visually fine presentation of a cartoon that was, after all, designed for the medium. The dominant picture element is chiaroscuro. Batman is a dark character against dark backgrounds, here using the shadows as an ally in a way the Nolan movies don't seem to understand. This Batman doesn't appear from out of frame, he lunges from dark doorways and black corners, a grey-blue bulk melting dramatically into view. But nothing gets lost in the night--the deep blacks never overpower and serve the film well, as do the gauzy filters applied to figures and settings in daylight scenes. In-house composer Christopher Drake again submits a fine score, given wide range to play in the DTS-HD Master Audio 5.1 sound-spread. His many subtleties live in the rear channels alongside the atmospherics, pulsing alongside street noise. The film sounds fully dimensional, and if Drake's music is a little more Escape From New York than usual, that's in keeping with the apocalyptic cityscape of a Batman-less Gotham. (If it apes the foreboding chug of the Zimmer/Howard Dark Knight scores, well, that's probably marketing.)

Unlike prior DCU releases, there is no commentary track. The disc's nicest featurette is "Batman and Me: A Devotion To Destiny" (38 mins., HD), a sensitive look at Batman creator Bob Kane that's newsreel-influenced and probably long overdue. The self-mythologizing artist fared better than most early-generation creators in his relationship with DC Comics (in part because his father made sure to have a lawyer read over his contracts and hold onto residuals), though it wasn't without struggle. Biographer Tom Andrae traces the history of how American Jews like Kane shaped the adventure pulp of the early 20th century, flowing eagerly into one of the few creative media not closed to them. He also pokes a few holes in the mystique of a man who claimed to have survived a youth gang fight that crushed the knuckles of his drawing hand. "I'm not sure that really happened," Andrae says. "I think part of Bob Kane's autobiography is Bob Kane writing a movie script." (In that selfsame script, Kane had a fling with Marilyn Monroe.) Stan Lee, who should know, describes Kane as "a guy who's a little bit bigger than life." Two 1992 episodes of "Batman: The Animated Series" (22 mins. each, SD) contain the origin story of Two-Face. The image is soft and dated, and the DD 2.0 audio isn't mastered to the same quality as the rest of the content, requiring you to turn up the volume by about 100 percent. On the whole, the persistent inclusion of these old chestnuts on new Bat-discs only strengthens calls for a definitive Blu-ray set of the series.

The rest is mostly glorified trailers. "Sneak Peek at Batman: The Dark Knight Returns, Part 2" (7 min., HD) finds Oliva saying, "For the last twenty-five years, the fanbase has always been calling for an adaptation of 'The Dark Knight Returns'." Yeah, well, I want a pony. Bruce Timm is here describing the quest to "make this look more like Frank Miller's 'Dark Knight Returns' than the comic does," which is an invitation for fanboys to tweet "#EpicFail." Blurbs from voice actors of Part 2--Mark Valley as Superman, Michael Emerson as the Joker--raise hopes for the second instalment, mostly based on amazement at Emerson's creepy laugh and Valley's astonishingly Kryptonian chin. "A First Look at Superman/Batman: Public Enemies" (8 mins., HD) is a trailer for a dtv film that came out in 2009. "Her Name Is Carrie...Her Role Is Robin" (12 mins., HD) features Grant Morrison, producer Michael Uslan, and others nattering about the significance of a female Robin, but I throw my hands up when academic Richard Rader compares her to Antigone. Nice of Morrison to speak for fellow comics scribe Miller, who apparently won't speak on behalf of himself or DC. There are four pages of the "Dark Knight Returns" on board as a digital comic, blow-uppable panel by panel and entirely shrug-worthy. Trailers for H+: The Digital Series and DVD collections of five DC animated series load on spinup. Also accessible from the main menu are trailers for the DCU comics tablet application (available for every platform but my Kindle Fire), "ThunderCats: Season One Book Two," The Dark Knight Rises, and the remarkable-only-for-its-creative-bankruptcy "Before Watchmen" comics series. The included DVD is shorn of everything but five trailers. Follow Jefferson Robbins on Twitter 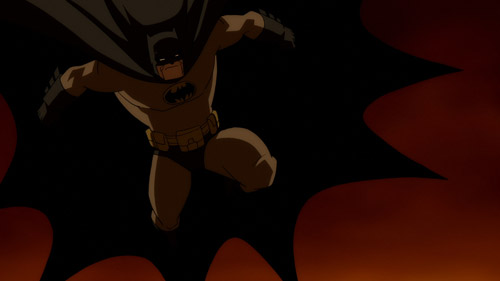