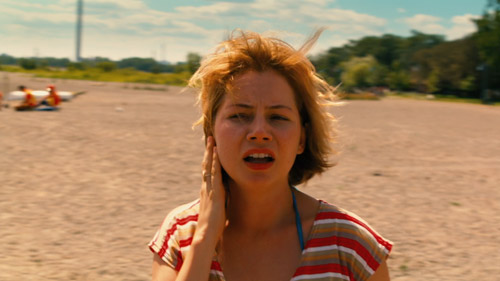 by Angelo Muredda As both literary adaptations and first features go, Sarah Polley's Away from Her was an astonishing exercise in restraint. Working from Alice Munro's short story "The Bear Came Over the Mountain," about a seventysomething married couple whose longstanding private games turn into something else when Fiona (Julie Christie) is diagnosed with dementia, Polley forewent the ostentatious route of many first-time directors by telling the story straight. It's become customary, in speaking of that film, to chalk up this directness to the source material--Munro is, after all, known for her frankness, and apart from the expansion of Olympia Dukakis's character and a Hockey Night in Canada gag, Polley ported her narrative beats over more or less wholesale. But Munro has a certain nastiness, not least in her omniscient narrators' cutting observations, that's largely absent from Polley's adaptation, which has particular sympathy for Gordon Pinsent's reformed husband, who's more of a forgetful cad in the short story. It's a standard line to say that Munro reserves judgment, particularly towards her adulterers, but what of the ghoulishness of her characterization, in Lives of Girls and Women, of small-town scolds who say things like, "The law-yer, didn't he think he was somebody?" Polley doesn't get sufficient credit for translating what she can of that prickliness--which also runs through "Bear"--and molding the rest into something unabashedly romantic.

Take This Waltz suggests a different sensibility, motivated by messier tastes. This is the adventurous mixed bag we might have expected from the debut, a technical step forward in craftsmanship that, unlike its more streamlined predecessor, is also unafraid to stumble on its screenplay. That guilelessness is key to holding our interest, given the patchy start. Returning to some of the same questions about long-term commitment explored by Polley's first film, which was cued into the figurative dimension of Alzheimer's to turn old relationships into endlessly self-renewing ones, Take This Waltz introduces us to Margot (Michelle Williams), five years into her marriage to Lou (Seth Rogen), a chef who only prepares chicken dishes. Lou's profession ought to be symbolic enough, but alas, we start with Margot's East Coast sojourn at a historical recreation of an adulterer's public flogging, where she meets Daniel (Luke Kirby), a rickshaw driver and secret (i.e., unpublished) artist who happens to live across the street from her in Toronto. And off we go.

Williams and Kirby have a jumpy sort of chemistry in these early scenes that makes half-palatable a number of implausible exchanges on the flight home. Most egregious is Margot's account of why she feigns a disability to be ushered to connecting flights in a wheelchair. It's the fear of connecting, she says, the fear of being afraid--which, as a wheelchair user, I would rank well below the fear of flying solo while disabled, or the fear of not making a connecting flight because the chair I use to get around was disassembled and randomly stowed in luggage. No matter. The problem isn't the undercooked nature of the example so much as the reliance on figurative shorthand to familiarize us with characters who ought to be fascinating on their own terms.

In fairness, this is no more overwritten than comparable dramedies like Marc Webb's (500) Days of Summer, a sitcom inexplicably heralded for its screenplay. The difference is that there's a real movie under Polley's first-draft quirks. Sex farce set-up aside, she unfailingly draws emotional realism from her ensemble. Rogen is very affecting as a kind person who's also no chump. Lou's the least telegraphed character, and the most present as a result; Rogen plays him so affably as a rule that there's palpable tension whenever you sense him registering that something's slightly off with his partner. Kirby brings a measure of low-key gallantry to his interloper, who on the page is pure fantasy: a sensitive, bohemian artiste who inspires orgasms with the power of his words and nabs no fewer than two of Toronto's most spacious lofts despite being seriously underemployed. Williams has the trickiest role as the person capable of setting in motion some plot developments we're not sure we want to see. She's often cast as dour, but Polley's script lets her be immature for once--tentative in the way she goes about getting what she wants while staying as loyal to her husband and as true to herself (whoever that is) as possible.

Polley builds Margot's dilemma to a fever pitch, nicely conveyed by impressionistic lensing from Luc Montpellier that makes this prolonged courtship dance feel like the product of heat exhaustion in a muggy Toronto summer. But the last act is a letdown, beginning with a camera-swirling, time-lapsing montage scored to the titular Leonard Cohen song. This isn't the first time the film trades realism for lyricism, but it is the least productive--a structural shortcut designed to push the characters into a new situation without having to account for the time in between. And the script tries to have it both ways, recapping what we've missed in a risible monologue from Lou's sister Geraldine (Sarah Silverman), the kind of lapsed alcoholic who speaks like an Academy Award-nominated screenwriter.

Just as you're about to write the film off, though, it comes through with an arrestingly sensuous coda. In each of her looks at marriages under duress, Polley takes seriously her characters' desires; after Silverman's moralizing screed, Take This Waltz closes with a refreshingly judgment-free indulgence of Margot's whims. "I think all we can aspire to in this situation is a little bit of grace," Fiona says in Away from Her, and that's what Margot gets here--a moment in the dark on Toronto's Centre Island Scrambler ride, between her and an old pop song that's too good to spoil. While it's easy to list the movie's sore spots, there's something brave about its commitment to letting this woman amble restlessly through her toughest decisions, about its generosity in allowing her to fail, if she needs to, before letting her off an a grace note. Whatever its flaws, that makes Take This Waltz a gutsier, if less polished, work than Polley's debut, as well as one of the few romantic comedies in recent memory to treat its female characters like adults, with impulses even they don't fully understand. 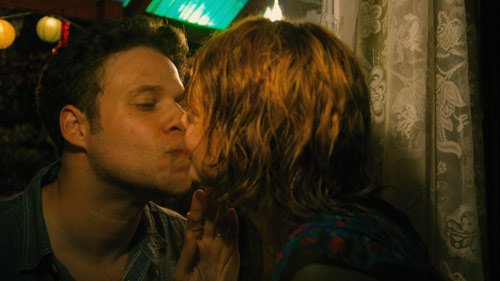 THE BLU-RAY DISC
Magnolia's stateside Blu-ray release of Take This Waltz presents the film in a vibrant 1.78:1, 1080p transfer. DP Luc Montpellier employed the Panavision Genesis and the Canon Rebel interchangeably, and though transitions between the two cameras are reasonably seamless, sorry to say that a telltale solarization effect overtakes fleshtones in footage shot with the Rebel, which does not handle dips and fluctuations in light with much agility. (Unfortunately, the Rebel is often used in conditions where the source illumination is temperamental at best, like the Centre Island "scrambler," or tracking shots under the cover of dusk and street lamps.) For the most part, the image is bold, dynamic, and cinematically sharp, with Montpellier's Robert Richardson-esque lighting techniques lending themselves nicely to both the medium and the genre. He and writer-director Sarah Polley also capture something ineffable of Toronto humidity that comes through in a light sheen of oil on the actors' skin in scene after scene; I kept thinking that this little detail wouldn't ring through in standard-def. The attendant 5.1 DTS-HD MA track gives "Video Killed the Radio Star" a wide berth--crank it up past reference level and you will feel as if you're riding that scrambler, too--while reproducing the dialogue with pinprick clarity.

Extras begin and more or less end with Christopher Warre Smets's "Taking the Waltz" (38 mins., HD), a deliberately-paced making-of that captures its interview subjects at their most contemplative--Polley, in particular. She speaks eloquently about the hollowness of desire and the hardscrabble wisdom of drug addicts, and comes in for a round of praise from Montpellier and the cast, with Sarah Silverman getting choked up as she expresses her gratitude for the opportunity Take This Waltz presented her to play against her vulgarian persona. Rogen, too, felt like he was getting to spread his wings, and contrasts his love of being directed with Polley's purported resentment of it. While there's something disingenuous about Williams claiming she has often asked herself "WWSP?" ("What would Sarah Polley do?"), I did like her describing the film as a "coming of age" story. That's exactly right. Yet she doesn't seem to think she's struck these notes before, when Take This Waltz is nothing less than Jen Lindley: The Movie. Comparatively disposable, "AXS TV: A Look at Take This Waltz" (5 mins., HD) vapidly probes Williams, et al on the red carpet of the Tribeca Film Festival between soundbites from the film. Pass. HiDef trailers for 2 Days in New York, 360, The Good Doctor, and The Queen of Versailles cue up on startup. 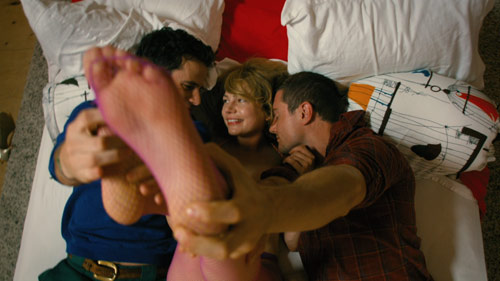 This is a superb review. I totally agree that the film has some first-draft flaws and on-the-nose moments yet enjoyed it overall.

I am ALWAYS infuriated when I see broke people in HUGE apartments too, ever since FRIENDS anyway.