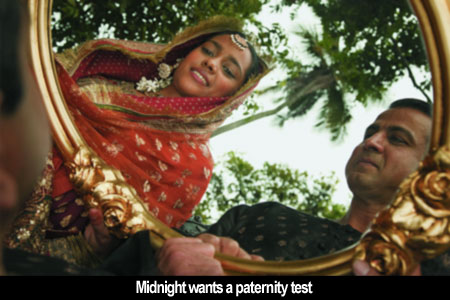 by Angelo Muredda It's a nice bit of synergy, good for at least one heavily-latexed Tom Hanks reincarnation, that Deepa Mehta's adaptation of Midnight's Children should come out so soon after the Wachowskis' and Tom Tykwer's ill-fated stab at Cloud Atlas, perhaps the only contemporary novel more labyrinthine than Salman Rushdie's magic-realist opus. So earnest are both efforts that one is tempted to ignore their fundamental failures as either cinema or adaptation and bow to the good intentions of the faithful stewards. Yet one wonders about the value of such graceful gestures when, combined, the two films take up a staggering five hours--indefensible, given the limpid mysticism they have to show for themselves at their muted conclusions. Read together, they're proof that in the absence of a real necessity for adaptation, big novels make for small movies.

While Cloud Atlas's misstep is a consequence of the filmmakers' misrecognition of David Mitchell's pointillist worldview as a connect-the-dots essay on fate, in Mehta's case, it's her goodwill to the author that proves most destructive. Rushdie announces himself from the earliest moments, not only as a credited screenwriter but also as the Dickensian narrator who introduces us to this transitional world of India on the eve of its independence. It's Rushdie, then, who strikes the first flat note of many with his avuncular reading voice, an instant admission that this is going to be a problem film, an overly friendly book-on-tape rendition of a difficult text. It's hard to think of an adaptation that required a firmer hand to guide it than this one, making Rushdie's gentle intervention into his own novel--rather like a live table-read--exactly the wrong approach.

Still, you can't blame Mehta for choosing such a safe throughline, given the historical complexity of the material, which follows its characters back through their family lines to British colonial rule, then forward to the partition of India and Indira Gandhi's Emergency. The story nominally follows the remarkable trajectory of Saleem Sinai (Darsheel Safary as an adolescent, and Satya Bhabha in his twenties), the orphaned child of a street performer and a vanquished colonial soldier (Charles Dance), switched at birth with a landlord's baby by a hospital nurse (Seema Biswas) in a rare burst of utopian sentiment towards the poor. That Saleem and his changeling double Shiva (Siddharth Narayan), the wealth-bound infant raised as a pauper in his stead, each possess supernatural powers as a consequence of their birth at such a charged political moment ought to be story enough. In hewing closely to the novel, though, the film renders them as blips on a historical flowchart that extends into wars to which they're only nominally connected, and it struggles in the last act to shoehorn in a love triangle with a noble witch (Shriya Saran) whose powers rival their own.

Saddled as she is with Rushdie's hazy historical signposting, there's little excuse for Mehta's flat visual style, particularly given the sensory vividness of her earlier films. The title characters, a host of supernatural youth born between midnight and 1 a.m. on Independence Day, get the worst of that aesthetic thrift: The sequences where we see them telepathically assembled in Saleem's room have the same soft-focus gauziness as a standard episode of "Touched by an Angel". Magical realism is tough to capture onscreen, but Mehta doesn't even bother trying, having the characters instead describe their gifts in momentum-killing asides. Their costumes, meant to be period-specific, reek of budgetary restraint, resembling a dinner-theatre production of a historical epic. Only an impromptu dance to the twist feels like an organic riff on the novel from a director who thinks of herself as an equal to it, and there, too, the riff seems calculated.

Its failings aside, the film absorbs some of the book's thematic grace notes. There's much to appreciate, for instance, in its emphasis on the mongrel nature of global citizenship, as well as its insistence on focalizing world history through its most tangential players: poor subjects who have no say in political decision-making. But one doesn't emerge with a sense of the text's importance or, for that matter, its narrative texture. Rushdie is a luxurious writer with an offhanded gift for turning matters of great delicacy into witty, easily-digestible aphorisms. Where his novel is complex, Midnight's Children is merely busy. Follow Angelo Muredda on Twitter