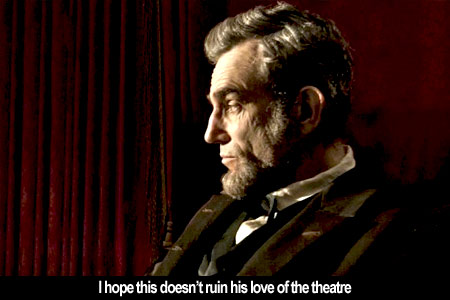 by Walter Chaw Bearing no relationship to the Gore Vidal biography with which it shares its name, Steven Spielberg's predictably uneven Lincoln features moments of real grandeur narrated to death by John Williams's inspiring™ and rousing™ score. No speech from Honest Abe (Daniel Day-Lewis) goes without ample and gaudy decoration, making me wonder which one Spielberg doesn't trust to deliver the goods: Day-Lewis, or Lincoln. More to the point, what Spielberg probably doesn't trust is the viewer's intelligence and humanity, meaning the real question is whether he thinks the kind of people who would go to a movie about Abraham Lincoln are morons. Either way, it's not the sort of behaviour that should be rewarded or go unremarked-upon. Consider that the absolute best, most powerful moment of the film arrives within the first five minutes as Lincoln sits in a bivouac, taking questions from foot soldiers--and consider that this instance of naturalism is neatly destroyed by Spielberg's instinct towards swatting flies with Buicks. What could have been an affecting, quiet bit with our most revered national figure ends with a clumsily proselytized mission statement as a black soldier recites the end of the Gettysburg Address--a not-subtle reminder that the mandate of Lincoln's second term carried with it the responsibility to push the 13th amendment ending slavery through a divided Congress.

That's actually what the entire film--beginning two months after Lincoln's re-election and detailing how he connived, strong-armed, and politicked enough of his Democratic adversaries into voting with the abolitionist Republicans (I know, right? What the hell happened to the GOP?) to end the oppression of African-Americans in the United States--is about. Everything else is left to the margins: his "team of rivals" cabinet, the long exile of Jefferson Davis, the last hellish days of the Civil War... If you're hoping that Spielberg has again succumbed to his worst instincts to deliver a Hall of Presidents feel-good piece about Abraham Lincoln vs. slavery, boy, are you in luck.

The problem is that what Spielberg does best--really all he does, anymore--is mythologize his subjects. This makes him the obvious but worst choice for a film about the single most mythologized figure in our short history. Henry Fonda didn't want to play Lincoln because he compared it to playing Christ (it took a profane John Ford to bully him into it), and Spielberg is entirely incapable of treating Lincoln as anything other than a holy, sainted martyr. He consistently shoots Day-Lewis as part of a frieze, his every posture either tortured genuflection or monumental profile--and of course every time he opens his mouth to speak, there's that goddamned music to sledgehammer the words' import. Lincoln has two modes: the Great Emancipator as orator; and good ol' Abe as folksy Mark Twain storyteller. Both are handled with the same lack of subtlety and, indeed, shame. Spielberg's approach turns Abraham Lincoln into Paul Bunyan. Lewis's best moment comes when he betrays in the middle of an otherwise-inconsequential meeting that he's tortured and alone--a moment again murdered by Spielberg narrating as much first in a dream sequence (seriously), then in a fight with First Lady Mary Todd (Sally Field). No good scene goes unpunished. When Day-Lewis isn't on screen, the film sags badly with the Keystone Cops exploits of a trio of lobbyists (James Spader, John Hawkes, Tim Blake Nelson) and the Revolutionary abuse-comedy stylings of Thaddeus Stevens (Tommy Lee Jones, because Don Rickles is busy doing Toy Story 4, you hockey puck). The climax is an argument and vote in the house that no amount of slow push-ins renders exciting; and the inevitable assassination is shown from the POV of youngest son Tad (Gulliver McGrath), who, wait for it, wasn't there. The case for Spielberg being our most accomplished torturer and exploiter of children and their grief gains another foothold here. It's the worst kind of manipulation, and caused a couple of titters for its ripeness at the preview I attended.

What's left is a prestige piece not unlike Spielberg's similarly vainglorious War Horse. It's impossible not to be moved by an actor like Day-Lewis playing one of the true icons in American history; it's also impossible not to be offended by Spielberg's inability to resist printing the legend. Even the ways in which Lincoln skirted the law and worked the system--doing things that are, in his own words, "impeachable"--to pass the amendment (up to and including, the film suggests, delaying the end of the Civil War to leverage more votes) are presented as pure fait accompli: the known ends justifying the at-times-questionable means. There's room for nuance aplenty in Lincoln, and Tony Kushner's screenplay manages to draw ambiguity from a number of situations (the Lincolns' marriage, Mary Todd's sanity, Lincoln's political tactics, the toll of the War in its last days), but Spielberg steamrolls opportunities for resonance in favour of ossified gallery tableaux meant to buff a story already polished to a blinding sheen.

A late revelation that Stevens is "married" to his maid (S. Epatha Merkerson) provides the film's most troubled moment not for the revelation itself, but for the way the screening audience gasped at the idea of miscegenation, a hundred-and-fifty years after the end of the Civil War. The lasting impact of Lincoln, released in the United States on the heels of a contentious and racially-coded presidential election, is how familiar is the intolerance, how clear are the lines drawn across class and race. Despite Spielberg's best attempts to make mawkish Lincoln's words and actions, they resonate still as stirring, painful reminders that maybe you only get one Lincoln, and now he's gone and we have to figure all this shit out for ourselves. Lincoln, in other words, is only interesting in spite of itself. It's Spielberg's Passion of the Christ, really, and no one needs to see it to know exactly what it is and how it'll go about it.

The telegraphed inevitability that oozes out of every pore of this movie was painful to sit through. I hoped it would end with the incredibly obvious,