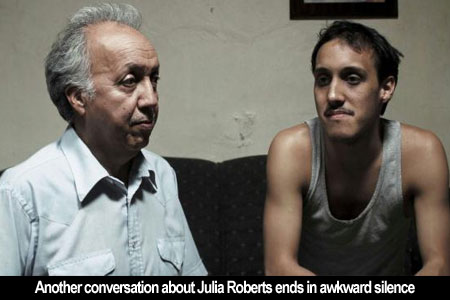 by Angelo Muredda Odd as it might seem for a 30-year-old director to get a retrospective, you can see the logic behind TIFF Bell Lightbox's series on Nicolás Pereda, whose six features demonstrate a remarkably consistent vision stemming from Pereda's interest in gently setting an audience's narrative expectations on their side. Pereda, who's been relatively unheralded in his adoptive home of Toronto (despite his sturdy international reputation and his 2011 feting at New York's Anthology Film Archives, to name just one laurel), brings the sophistication and focus of an old hand to each of his formally rigorous but unassuming projects. Although it's his most recent work, there's perhaps no better starting point for the uninitiated than the aptly titled Greatest Hits, which sees Pereda gathering his cast of players for a twist on the family reunion.

The title refers to a bootleg CD of Spanish love songs peddled by Gabino (usual lead Gabino Rodríguez), who rattles off heartsick and eerie titles--ranging from "What Once Was Will Never Be" to "Contaminate Me"--to the mirror in the opening scene, before we realize he's just rehearsing for his job. That brief moment of vertigo as we suss out the nature of what we're seeing is typical of Pereda's style, which blends the documentary with the fictive and slyly suggests they aren't mutually exclusive categories. The biggest gamble and best payoff, to that end, comes with the tricky structure. Pereda splits the film into roughly two equal parts--the first a low-key domestic melodrama about the return of Gabino's truant father Emilio (José Rodriguez López), a pyramid-scheme mark who's introduced as a holy fool in a static frontal profile scored to Bach's Goldberg Variations, and the second a continuation of their reunion with a radical difference, signalled by the unexplained recasting of Emilio with Luis Rodriguez and the shift from Gabino's cramped home to the second Emilio's ratty apartment.

That structural gambit might seem like a parlour trick if not for the seriousness of Pereda's treatment, which allows the ensemble--including regular Teresa Sánchez as Gabino's mother--to dramatically recalibrate their performances to the rhythms of the new player. Liberated from the baroque flourishes and deliberately stilted situations of the first act, such as an unexpectedly harrowing living-room confrontation between Emilio and a friend of Gabino's, the denouement finds the cast keying their old characters into a newly realist aesthetic, with Gabino especially transformed into a more assertive presence by virtue of the more candid actor playing his father, whose reasons for leaving in the first place are also retooled. Yet as the opening rehearsal suggests, Pereda is not trying to privilege the authentic so much as force us to think about how it bleeds into performance. It's telling that the shift to an ostensibly less artistically mediated, more direct version of events is signalled by the documentary trope of the interview, as an offscreen auditor directs questions to the characters in the early moments of the second half. What seems like the greatest proof of these characters' real-world existence beyond the frame, though, is no less constructed than Emilio's static close-ups once we realize the interviewer is the director himself.

In a recent interview with fellow Toronto-based filmmaker Kazik Radwanski for CINEMA SCOPE, Pereda accounts for his interest in showing the same scene multiple times, admitting that many of these moments are simply alternate takes rather than scripted repetitions. "I enjoy the repetition," he says, "but when I see that a take is different from the first one, only I can enjoy the difference." Exposing those variations, then, is a kind of gift to the audience, a way of inviting them into the pleasures of an artist whose canvas is the infinite variety of his actors' performances.

Where Are the Films of Nicolás Pereda? runs from November 22nd to November 25th at TIFF Bell Lightbox. Pereda will participate in a Q&A after each screening.