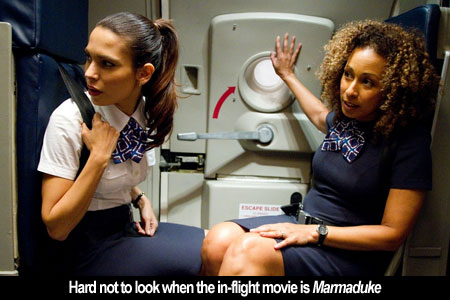 While seeing Robert Zemeckis's name on this movie definitely causes a bit of cognitive dissonance in the gritty early going, this is your first clue that he directed it: A big part of the Zemeckis Experience is having the major movements spoiled in advance by the marketing--the most notorious example being the trailer for Cast Away, which gave away Tom Hanks's eventual rescue from his desert-isle purgatory. (I'd call it Brechtian if exposure to advertising materials were actually mandatory.) Your second clue is that said coke-snort suddenly frees the camera from its axis, transforming a classic Hollywood close-up into a rubbery high-angle on Washington. Unlike so many trick shots in the Zemeckis canon (the floor P.O.V. of Michelle Pfeiffer in What Lies Beneath, the through-the-mirror pull-back on Jena Malone in Contact), however, it's a perfect marriage of form and function--discombobulating in a productive way.

Whip abuses drugs and alcohol both on the job and off. Nestling into the cockpit in the morning, the first thing he does is suck down the emergency oxygen supply, Frank Booth-style, while his new, young co-pilot (Brian Geraghty) looks on in dismay. But Flight isn't about an alcoholic who crashes a plane; it's about a man who pilots a doomed plane to relative safety in spite of his alcoholism. Meanwhile, in a parallel storyline, freckly Nicole (Kelly Reilly) pulls an Uma Thurman-in-Pulp Fiction, OD'ing on heroin by inhaling it instead of injecting it. This lands her in hospital, where she meets a banged-up Whip. The two begin a decreasingly co-dependent relationship that always seems chaster than it should (is there any couple sexually hungrier for each other than two addicts?), perhaps as a by-product of Washington's notorious reticence to promote miscegenation.

The question of the film is whether Whip should admit to being intoxicated when the plane went down, since the two things are, in Zemeckis's words, apples and oranges. He faces criminal charges if he does, and this would undoubtedly erase any memory of his heroics whilst allowing the monolithic airline to share accountability for putting a broken boat in the air. If he doesn't, well...the filmmakers sneakily move the goalposts. That naked woman we saw in the prologue? She was another of Whip's flight attendants, and a rare casualty of the crash. She was also a recovering alcoholic, and when some of Whip's discarded bottles of booze are found at the crash site, his only recourse is to say they were hers. Will he allow poor Katerina Marquez, who selflessly aided the passengers when disaster struck, to die in vain? That's a less interesting moral dilemma, if you ask me, because it sentimentalizes the stakes and baits mainly test audiences, champing at the bit to rate Whip as "unlikeable" on their NRG scorecards.

Flight is a depature for Zemeckis, yes, but so were the wintry animated movies (from live-action and Oscar bait), so was Forrest Gump (from the Spielbergia), and so was Romancing the Stone (from the zany farces). He is nothing if not a prismatic director whose true niche is technical innovation, though after a decade spent trying to sell us on a MoCap genre we didn't want*, he seems to have no interest in reinventing the wheel with Flight. But the disappointment of the film is its gradual retreat from the grey area the high-functioning alcoholic represents. This being Zemeckis, there are discrete moments that dazzle--not so much visually as conceptually, thus harking back to his Used Cars days. I love, for instance, that Whip's hotel room looks like there was a grizzly-bear attack after he goes on a bender, and I love the way Whip's conflicted union reps (Bruce Greenwood and Don Cheadle, reunited at last with his Devil in a Blue Dress co-star Washington) become accessories to his sordid lifestyle in a raucous attempt to sober him up. And the climactic hearing is a corker, although the threat that Zemeckis will turn into Frank Capra is constant and large-looming. It happens to the best of them. Follow Bill Chambers on Twitter

*You might say that Washington as well spent the past ten years making cartoons.