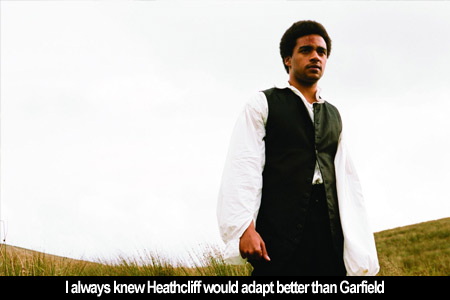 by Walter Chaw SPOILER WARNING IN EFFECT. The animalism, the absolute withering upheaval of the "feminized" Victorian-novel tradition, Emily Brontë's Wuthering Heights has long been one of my favourite books. What's never been properly captured in its myriad film adaptations is the earthiness that tethers its gothic, sometimes supernatural, trappings. Neither guilty pleasure nor bodice-ripper, it's a wallow, a traipse through high heather that only hides the wet suck of the moors, and damned if it doesn't, when all's said and done, project something like a masculine gaze in its positioning of brooding, demonic Heathcliff at its centre. It's a romance--a destructive, devouring romance constructed all of regrets and unconsummated desire; and Andrea Arnold's wise, visceral take on it is the underbelly of Jane Campion's brilliant Bright Star. Together, they would construct a poetic whole: the Romanticist yin of Bright Star to Wuthering Heights' roaring Victorian yang. Arnold's film is so good, in fact, that it clarifies how it is that Romanticism, through Victorianism, eventually becomes Emerson's Naturalism and then, ultimately, Modernism. It's a continuum, isn't it, and Wuthering Heights is the missing link in a very particular Darwin chart. The excitement of it for me is that it's an example, pure and new, that film at its best is poetry.

Heathcliff (Solomon Glave as a child, James Howson as an adult) is a mongrel child found and spirited away to the filthy shithole of the titular backwater farm, where he's treated, essentially, as everyone there is treated: like an animal. He's abused by his adoptive brother Hindley (Lee Shaw) at the same rate he falls in love with his adoptive sister Catherine (Shannon Beer/Kaya Scodelario). When Catherine declares that she's going to marry foppish Edgar (James Northcote), Heathcliff vanishes and then, having spent three years making his fortune and crafting his plan for vengeance, returns. There's nothing pretty about this Wuthering Heights. The wind is relentless, and suddenly it makes sense why everyone in the book was sick all the time; things fuck and die and kill and are killed and everything is covered in a patina of mud and blood and tears and come. There's a scene where Heathcliff slaughters a sheep, another where he hangs a dog on a fence; there's such a complete offhandedness about it all, it serves to remind that what's most shocking isn't those acts, but that we find them to be so.

Of all the things the picture does as an act of literary criticism, what it does best is excavate the vitality of the source material, freeing it of the density of prose in what is almost an act of exorcism. This Wuthering Heights is tactile. You can feel it inside your head and in your crotch, especially in a moment where young Heathcliff and young Catherine wrestle in the muck until he pins her there and she stops struggling. Or in another where, after Catherine has died and Heathcliff, in a paroxysm of grief, ravages her corpse. It's taboo, of course, shy of necrophilia in the literal sense but no less so for it, and it's a moment that encapsulates the film.

Passionate, lawless, hungry, and, at the end of it, spent and empty, it joins Paul Thomas Anderson's The Master among movies released in the United States this year that marry a deep sense of nostalgia with what in that film is Keats and a Keatsian consummation conceit. Wuthering Heights evokes, appropriately, Tennyson and that poet's eternal "Tears, Idle Tears" (published in the same year as Wuthering Heights), which ends with "Dear as remembered kisses after death,/And sweet as those by hopeless fancy feign'd/On lips that are for others; deep as love./Deep as first love, and wild with all regret;/O Death in Life, the days that are no more!". Nostalgia, yes, but backwards-looking without the consolation, however cold, of transformation. Wuthering Heights is fantastic. Almost a silent film built on textures, it announces Arnold as a filmmaker to be reckoned with in a more pronounced way than her solid but derivative Fish Tank. It is in so many ways the first adaptation of Wuthering Heights. It makes me want to die in the best, most exhilarating, most exquisite kind of way.