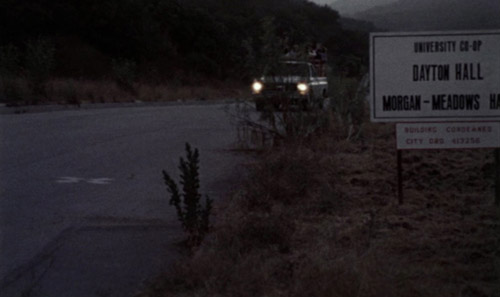 by Jefferson Robbins There may be nothing groundbreaking or new about a bunch of film nerds in their early twenties running around making a horror movie on the cheap, but that's because Jeffrey Obrow and Stephen Carpenter probably did it first. Created with the kind of zeal, energy, inventiveness-on-a-budget, and adherence to forms that are symptomatic of most youthful endeavours, The Dorm That Dripped Blood--written, shot, and released under a multiplicity of titles--is very much a product of its time and zeitgeist. That doesn't mean it lacks worth--in fact, it manages to be both fun (in an ironic, cheesemongering way) and, in its final minutes, quite compelling and suspenseful.

In the directors' script, written with Stacey Giachino, the co-op dormitory Morgan Meadows Hall--on some unnamed campus that appears to consist of two buildings in the middle of Death Valley--is slated for demolition after the fall semester ends. Four collegians volunteer to stay on and prep it for closing. Joanne (Laurie Lapinski) is under pressure from boyfriend Tim (Robert Frederick), who's headed off on a ski trip, to move in together; she's using this post-semester chore as time to think about it. She's joined in the stayover by Patti (Pamela Holland) and two male students, Craig (Stephen Sachs) and Brian (David Snow)--a four-way that offers possible romantic entanglements and attendant jealousies. On the periphery are oddball John Hemmit (Woody Roll), a loner who's not supposed to be on campus but haunts it anyway, and Debbie (a tremblingly young Daphne Zuniga), pitching in a bit before her parents come to pick her up. The group goes into the project without fear, as this dorm--done up in concrete '60s Brutalism--has no spooky past or legacy of murder. Which is odd, considering we've already seen one pre-credits murder sequence, with a man pinned down by a faceless killer who carves his hand in half. No one in the film ever mentions this.

Once the killings begin in earnest, the first ones slain are outliers to the main group, keeping the core characters in the dark. From the start, then, we know something they don't--a prime element for suspense. The kills are carried out with a certain aplomb: What the filmmakers have learned, at this young age and in the twin shadows of Halloween and Friday the 13th, is that brutality and visual verisimilitude sell, so the close-ups are on the gore-work by budding makeup F/X artist and future Oscar winner (for Bram Stoker's Dracula) Matthew Mungle. It was these nose-in-the-wound shots that got The Dorm That Dripped Blood in the most trouble with distributors at home and censors abroad, as head traumas, live boilings, and strangulations were trimmed or wholly excised before screening. Yet shock is not the only value on display. Some murders take place in dormitory stairwells, the killer striking from an upper step à la the slaying of Arbogast in Psycho; when they happen, the accompanying stings by composer Christopher Young (later of Rounders, Hellraiser, and Spider-Man 3) are pure Herrmann--or, in one passage, Jaws-era Williams.

So Obrow and Carpenter (no relation to John) know their signposts, but they still take unexpected routes to reach them. A long shot of the killer carrying his unconscious prey/beloved pings back to the Universal monster classics. Rescuers gun down an outsider innocent like Duane Jones in Night of the Living Dead. A shoulder wound leaves one suspect with a hunchback, the cinematic shorthand for pathetic, misunderstood malice. The death of a caretaker is prefigured a few scenes earlier by a slow dolly-in on him from behind, then spares him. To save her life, Joanne must talk her executioner down from his mania, and the suspense hinges on her hopes of soothing the beast within. It's not seduction, but it is a sort of beguilement--the peaceful feminine at work on the savage masculine--that we see at work when Ginny Field placates Jason Voorhees in the contemporaneous Friday the 13th Part II. Even the moment where the killer unveils himself and assesses his own place in the social order proves precognitive of future horror, like the Scream franchise characters' meta-acceptance of their roles.

The game cast, while not always smooth with their line-delivery, is a wholly believable assortment, and Lapinski is a warm and intelligent presence in their midst. She has the mature beauty of a genre-issue Barbara Stanwyck and the scream/sob of a Shelley Duvall. The budget shows at times, popping up as variations in audio quality between two shots in the same scene or lighting that wobbles between "artful" and "can't see a damn thing," and I wish they'd sprung for some black gloves rather than having the killer bare-hand everyone to death.

THE BLU-RAY DISC
Synapse Films, purveyors of Blu-ray grindhouse fare like Maniac Cop, Frankenhooker, and the great late-Hammer classic Vampire Circus, puts a 1.67:1, 1080p polish on a title that already suffered from being blown up to 35mm from 16mm. What that means is grain, grain, grain across the dull colour palette. In a film that's mostly black, a fair portion of crush is observable. But the transfer's been lovingly cleaned of print aberrations, and Synapse went several extra miles in assembling a directors' cut of sorts that restores footage trimmed in the American release and wholly purged in the UK's "Video Nasties" panic of the early '80s. (The in-credits title is Death Dorm, in keeping with the creators' original intent.) To do this, the mastering house combined audio from an R-rated source print with the image from an original, unrated answer print. This meant remixing and rescoring sound extracted from an R-rated print to fill in missing seconds and lost sequences, as well as Foley-ing in new effects--no small labour. The 2.0 DTS-HD MA mono track is fine for a slasher but maybe a bit less respectful of Young's fine score than it could be if upped to 5.1. (It atones for this with a music-only track, likewise in lossless 2.0.) As with the image, the sound overall is hampered by the less-than-epic quality of the source.

At a remove of thirty years, co-directors Obrow and Carpenter re-team for a fun, informative, fondly-nostalgic feature-length commentary. Both have gone on to higher-profile projects, most of them still steeped in the horror genre, and The Dorm That Dripped Blood is the starting point they proudly embrace. Talking about it, they still sound youthful despite the time passed. Obrow is the chatterbox of the duo, outlining how the UCLA friends took inspiration from the American slasher wave, raided the university's stash of cameras, shot 18 to 24 hours a day throughout campus during vacations and holidays (including Christmas Day, when some of the stairway kills were put to film), staged brutal fights scenes on concrete floors with no stunt doubles and no padding, and created a fictitious casting director just to bulk up the credits. "Whatever we were doing, it was definitely wrong," Obrow says. Their vision ran up against mores and economics when it came to distribution, cutting the fingers off their baby. "It just broke my heart that we had to take out all the gore," Carpenter moans. "And the head-drilling!" The chat is rife with technical tips, lessons learned, and advice to up-and-comers, making it a valuable document for the kind of young filmmakers Obrow and Carpenter were in 1980. "Come up with a plan that's doable, and then have some real perseverance about it, and don't let go," Obrow says. "And find a little bit of money...to put together maybe a sample of what it would look like, a little trailer of some sort." Delightfully, and in keeping with the experience their film provides for the home viewer, Obrow and Carpenter are audibly snacking throughout.

If the directors are still proud of their baby, Christopher Young sounds like an actor forced to watch home videos of his junior-high drama-club performance. In the featurette "My First Score with Christopher Young" (8 mins., HD), he expresses embarrassment over his work on Dorm, perhaps because he's advanced so far in his career. Poorly mic'd in a way that makes sibilants rasp, Young admits looking to Bernard Herrmann and Jerry Goldsmith for inspiration, as well as mimicking the techniques of the composers on other slasher flicks of the time. He cops to what the directors' yakker refers to as a "time management" problem during production: "It was really tough for me to get three seconds written in a day. Now I have to write two minutes in a day." Whatever his feelings now, his score is the strong right arm of the film.

For the left arm, we have the gore effects profiled in "My First Slasher with Make-up F/X Creator Matthew Mungle" (9 mins., HD). The artist was teaching makeup design when Obrow and Carpenter tapped him to do effects for the preview reel they used to entice investors. (It's not stated anywhere, but I suspect the movie's unexplained opening kill is a remnant of this reel.) "I think the budget came to $1,800 for everything," he says. As with the directors, the censors' cuts came as a blow to him. Lastly, one of the two Hi-Def trailers (approx. 2 mins. each) rounding out the disc promotes the picture under its initial release title, Pranks, which didn't go over so well. No wonder: That trailer not only defines what "pranks" are, but goes on to spell it out for us. Horror movies can be dumb, no question, but there's no need to insult horror viewers to quite that degree. Find all this content duplicated on the accompanying DVD, plus a cover insert that can be reversed if you'd rather your shelf display a copy of Pranks. Follow Jefferson Robbins on Twitter 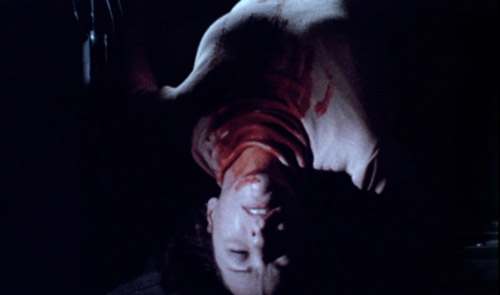 A mixer, or mixing console, or mixing desk, or mixing board, or software mixer is the operational heart of the mixing process.[5] Mixers offer a multitude of inputs, each is fed by a track from a multitrack recorder; mixers would normally have 2 main outputs (in the case of two-channel stereo mixing)