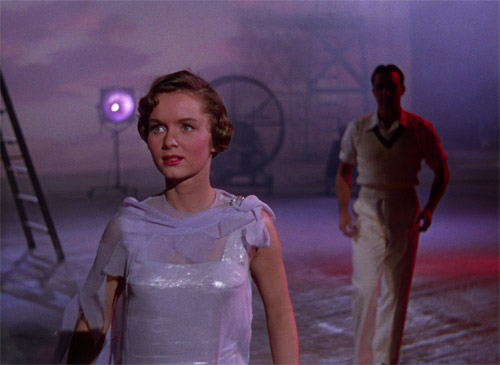 by Bryant Frazer Not just the best Gene Kelly film, and not just the best movie musical ever made, Singin' in the Rain is a genuine national treasure--a single text proving for posterity what a wondrous thing the Hollywood studio system could be when it was firing on all cylinders. It's the quintessential studio picture and smart as hell about its own nature. Unpretentious and unabashedly entertaining, it's a self-reflexive product of the same filmmaking process it simultaneously documents and lampoons.

In Hollywood, even the most sublime masterpiece is originally conceived as a purely commercial proposition, and Singin' in the Rain got its start as a convenient way to exploit existing MGM properties. Producer Arthur Freed was sitting on a catalogue of songs he wrote with Nacio Herb Brown for musicals released in the 1920s and '30s, and he had the idea of recycling them in a new project. He put Betty Comden and Adolph Green to work developing a screenplay that could accommodate the tunes. The project came to be an easy fit for Gene Kelly, who had already worked with the writers on the movie version of On the Town. Making it a period piece set during the transition to sound filmmaking, Comden and Green wrote Kelly as a romantic lead from the silent era who returns to his song-and-dance roots when the move to talkies threatens his career. Donald O'Connor plays a hoofer who shares his vaudevillian history and Debbie Reynolds is the fresh-faced ingénue who crosses paths with Kelly's movie star at a Hollywood premiere. Upstaging Kelly's regular screen partner, the squeaky-voiced Jean Hagen, Reynolds eventually becomes his paramour and protégé.

Though the backstage-romance element--boy meets girl and falls in love, boy's jealous co-star meddles--is pure formula, the farcical depiction of the early days of sound recalls a period of real creative and technical crisis in the industry. Everyone knows it was a make-or-break time for the biggest stars, with recent immigrants faring especially poorly due to their accents. But there were serious technical challenges, too: Take a look at the first all-talking picture, the justly-forgotten Lights of New York (assuming you can find a copy), and watch characters huddle awkwardly around a microphone stashed inside a prop, go silent as they cross the set, and then huddle intimately again around another hidden mic. Singin' in the Rain engages easily with that aspect of film history, having an exasperated and elaborately costumed Hagen lean into a shrub that's wired for sound and declare, "I can't make love to a bush!"

That kind of business could seem tedious or self-congratulatory, yet Singin' in the Rain is rarely not funny. Comden and Green keep their inside-baseball mostly grounded in character, showing how Don's confident but nonsensical ad libs fall flat with an audience, or having him and Lina snarl cutting jibes at one another while they play a tender (but silent in the finished product) love scene. At a preview screening, the sound goes out of synch with the picture, resulting in a bit of Dadaist hilarity as the pair's identities are reversed. Anyway, the day-to-day grind of filmmaking is merely the sideshow. The main event is, of course, the cascade of smashing musical numbers that highlight and punctuate the love story.

Among the most celebrated for its visual sensibility is "You Were Meant for Me," in which Kelly--the silent star at a loss for words to describe his feelings for the young Debbie Reynolds--escorts Reynolds to an empty soundstage, where he summons purple twilight and Hollywood wind and croons, "You were meant for me and I was meant for you." You can see the mismatch between Kelly's expert moves and Reynolds's more simplistic, almost childlike pantomime. (A later, more strenuous performance in the Kelly/O'Connor/Reynolds number, "Good Morning," is said to have left her feet bleeding.) Kelly is reputed to have given her a terrible time over her inexperience, but in truth her immaturity serves the story well, helping to illustrate the nature of her necessarily imbalanced relationship with Kelly's character: part May-December romance, part mentor-student partnership, and part paternal affection.

The overtly sweet stuff is more than balanced out by some of the most joyfully rip-snorting dancing ever committed to the screen, owing largely to O'Connor's presence. O'Connor has two showcase numbers, both set to new songs. The show-stopping "Make 'em Laugh"--lyrically and musically, an unashamed rip-off of Cole Porter's "Be a Clown"--sees an increasingly manic O'Connor pounding the ivories, cheerfully abusing his body, and literally climbing the walls. The equally kinetic dancing for the wonderful "Moses Supposes," an original Roger Edens composition with lyrics by Comden and Green, isn't nearly as full-contact, though it puts Kelly in a feedback loop with O'Connor, resulting in both dancers reaching new heights of sheer exuberance as they showcase, match, and outdo each other's moves. 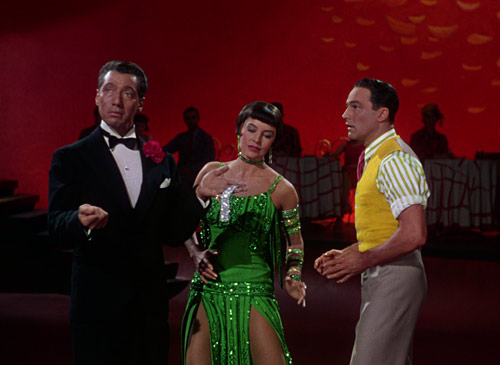 In fact, you could argue that what's missing from the lengthy "Broadway Melody" sequence that closes the picture is O'Connor's knockabout presence, which might have tugged mischievously at the sleeves of Kelly's deliberately screen-filling, movie-star performance. The individual scenes here throw Singin' in the Rain slightly off-kilter, but they're still movie magic. Kelly and guest star Cyd Charisse, rocking a lush, green flapper dress, at one point evoke an animalistic lust that transcends the boundaries of G-rated propriety. A more impressionistic interlude has her wrapped in an impossibly long scarf, blown this way and that in a stream of colour that represents a kind of fine-art approach to the dance number. Framed as Kelly's pitch of a large-scale all-singing, all-dancing musical extravaganza to studio chief R.F. Simpson (Millard Mitchell), this balletic section was, presumably, Singin' in the Rain's bid for greatness following the Oscar-adorned success of the comparatively dull An American in Paris, and it's wonderful as it goes--a climactic, near-orgasmic celebration of craft, creativity, and impeccable athletic form. It is, however, a wee bit self-satisfied in a way the rest of the movie is not. Fortunately, it gets a supremely witty punchline, as R.F.'s response to the impeccably staged film-within-a-film brings Kelly abruptly down to earth: "I can't quite visualize it. I'll have to see it on film first."

Broadway Melody is only one of multiple films that exist inside Singin' in the Rain. There's the fictional 1927 Lockwood-Lamont blockbuster The Royal Rascal, representing the silent era as a time of innocence and contentment. The gawky, awkward production of The Dueling Cavalier, growing into the hit talkie The Dancing Cavalier, represents puberty (complete with vocal changes) and young adulthood. And perhaps Broadway Melody, with its moments of surpassing beauty, sexual tension, and crushing heartbreak, is maturity. Of course, there are all those short subjects sprinkled throughout that use the dancers' superhuman physical prowess and the transformative environs of the MGM lot to make manifest the emotions that fill a mere mortal's heart to bursting. I don't mean to recapitulate the theme of every term paper ever written on the subject, but Singin' in the Rain is as smart as a picture can be about the special status of the movies--their function as escapism, wish-fulfillment, and a portal to gaze voyeuristically upon sheer beauty. 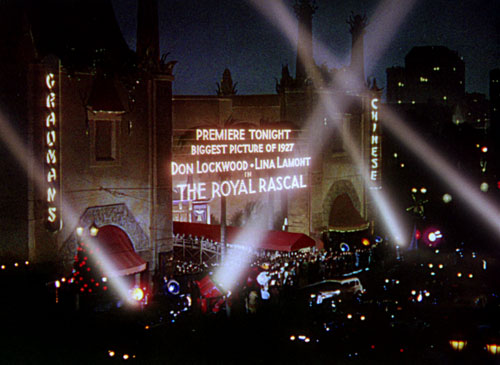 THE BLU-RAY DISC
Speaking of beauty, there's Warner's new Blu-ray release of Singin' in the Rain to deal with. The original three-strip Technicolor elements were destroyed in a fire, but the studio has pulled together a stunning 4K digital restoration based on protection elements. Part of me wants the 1.37:1, 1080p image to be a little sharper, but I've seen Singin' in the Rain in 35mm and I know there's just not a ton of sharpness to be had. Indeed, the hint of softness around the edges is part of what gives the picture its dreamy quality. I've seen complaints online about "haloing" around dark edges in a few shots, and while I agree that it's visible and occasionally distracting, this is almost definitely an artifact of certain optical effects (like dissolves, which necessitate another run through the optical printer) rather than an indicator of edge-enhancement techniques. (For one thing, the halos have a soft roll-off as opposed to the harsh, video-like edges digital filters leave behind.) The deep richness of colour is exactly right, and film grain dances lightly across the picture. The transfer is otherwise quite clean of dust and dirt, leading me to believe the restoration team took a digital dust-busting pass. Fortunately, Singin' in the Rain looks none the worse for it. The whole thing is encoded to AVC HD at a generous average bitrate of 37.3 Mbps.

Sound quality is equally terrific, although Warner should know enough to include a monaural option alongside its new 5.1 DTS-HD MA track. The soundstage stays mainly up front, with only the tiniest fragments of the overall mix making it into the rear speakers--and I'm sure that in the vast majority of home-listening environments, it sounds just fine that way. But there's plenty of room on this disc, so I can't understand why Warner doesn't make the purists and tedious pedants in the audience happy by giving us a lossless mono version we can embrace. What we do have is an exceptionally clear delivery of Singin' in the Rain's soundmix. Highs are robust, lows have a bit of oomph, and disparate vocal stylings are faithfully rendered without ever taking on the brittle quality that can plague older films. Whatever filtering and sweetening may be going on, it has brought out the best in the audio without obscuring aural detail.

New to Blu-ray is the execrably titled "Singin' in the Rain: Raining on a New Generation" (51 mins., 1080p), which talks to an array of song-and-dance types--headlined by Paula Abdul, but featuring enthusiastic young dancers and choreographers from the likes of "Glee" and "High School Musical"--about the influence of Singin' in the Rain and other classic Hollywood musicals on their own work. I might be more excited about this particular extra if it purported to tell me something I didn't already know (is anyone surprised, exactly, that Gene Kelly is an enduring influence on successful young dancers?), or if it didn't take up nearly an hour of time on the disc. Someone even invited Rob Marshall to the party, and he obviously didn't learn a damned thing from Singin' in the Rain.

All that's left is a theatrical trailer (in standard-def, so boo). There's more on the three-disc special edition, an expensive box set that contains a decorative umbrella along with all the standard-def supplements from the previous DVD special edition--but, as far as I can tell, no more new material, unless you count some printed matter. Plan your purchase wisely. 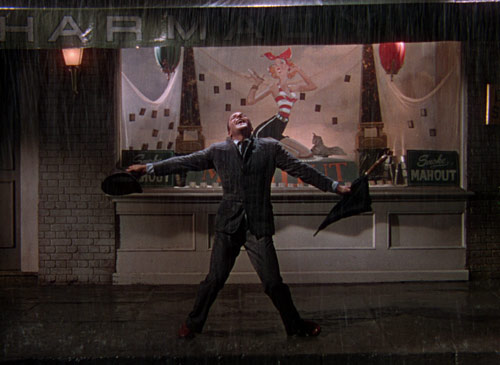