**½/**** Image C- Sound B Extras B
starring Tony Todd, Patricia Tallman, Tom Towles, McKee Anderson
screenplay by George A. Romero, based on the screenplay by John A. Russo and Romero
directed by Tom Savini 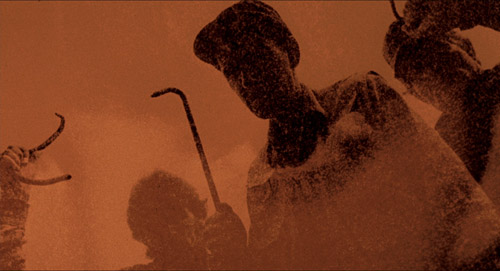 by Walter Chaw SPOILER WARNING IN EFFECT. George Romero's Night of the Living Dead is a watershed: a quintessential drive-in/B-movie that demonstrated without equivocation how horror/exploitation pictures are often "indicator species" in the cultural swamp--the ones that most quickly, most effectively locate the toxins in the ecosystem. Appearing in 1968, Night of the Living Dead addressed the rise of televangelism in its legion of communion-taking, slow-walking white people; predicted the generation gap (alongside Rosemary's Baby) and a spate of evil-children flicks that appeared in the early-'70s; and spoke to the Civil Rights war in its blithe casting of black actor Duane Jones and not-so-blithe murder of his character by a posse of hillbilly vigilantes in the final frames. There's something super-charged in the image of Jones holing up in a farmhouse with whiter-than-white, meeker-than-meek Barbra (Judith O'Dea), something explosive in the social microcosm represented by survivors trying, unsuccessfully, to work together to affect their escape from what's really just a metaphorical threat. The movie resonated then; it resonates still.

Tom Savini's 1990 remake of Night of the Living Dead is faithful--loving, even--but almost entirely free of the original's gravitas. It lacks the contemporary impact, of course--all the more so now in 2012, when basic-cable features a weekly zombie series complete with weak attempts at the kind of social relevance Romero achieved without the same labour-intensiveness. In positing more theories for the zombie apocalypse than did the '68 version, landing at one point somewhat definitively on a germ theory, it tapped into a contemporary fear of a super-flu rather than the previous generation's more oblique concerns about the crumbling of society from the inside out. It's like Arthur C. Clarke writing a novelization of 2001 to try to explain the monolith. When this Night of the Living Dead seems content to blame an external agent, it dilutes itself as an allegory. Exactly like Gus Van Sant's remake of Psycho, it fiddles around with the notes but doesn't hear the music. I wonder if anything could tap the '60s zeitgeist that wasn't made in the middle of not just any, but that particular, upheaval, unease, discontent. The fear in 1990 as reflected by the film is more along the lines of a surety that we were all going to kill ourselves, though its themes are so inconsistent and muddled, even down to the lore (do the zombies feel pain? Why are they afraid of fire?), that too much of the picture is spent simply trying to figure out what type of zombies these are.

That's not to say the picture is without wit. I like the suggestion that as our survivors nail boards across their makeshift fortress's windows, they're attracting the bad guys with the noise. I like the idea that hero Ben (Tony Todd, filling in for Jones) is given to fits of rage and irrationality, leading, in this iteration, to his death--and I like, too, the complexity allowed stock human bogey Cooper (Tom Towles), who is after all only defending his daughter at the end. While much has been made of Barbra (Patricia Tallman) getting a badass makeover, she in fact loses complexity and the film suffers by having less of a mute witness with which we might identify. O'Dea's shock in the original film is a blank screen--I was surprised at how much I projected a sense of hopelessness and isolation onto her stunned inaction, and I frankly don't buy that masculinizing a woman is akin to feminism besides. Though a late sequence with the new Barbara strolling away from the carnage in the only escape strategy that makes sense ("They're so slow, we can just walk away") has some of the same power as she's allowed time enough to consider the indignity of the zombies' half-life, it's a pity these moments appear to be accidental, ancillary to Savini's more comfortable role as make-up designer and more prurient desire to sit back and watch the carnage. I love, for instance, that the first thing to happen to Barbra is that she loses her glasses, yet nothing more is made of that descent into the unconscious--it feels a lot like it was done to make her sexier/tougher faster. It's also a shame that the Coopers' daughter is no longer a toddler but a teen; that the zombies apparently know how to use tools in the prologue (a brick to break a window) but lose that ability for the rest of the film; and that moments of real pathos, especially during the epilogue, are narrated into homily. "They're us," Barbara says. "We're them." It's an eye-roller. It didn't need to be. 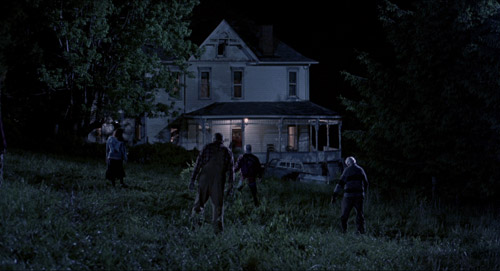 THE BLU-RAY DISC
Twilight Time brings Night of the Living Dead to Blu-ray in an edition limited to 3000 copies. (According to the company's website, it's already sold out.) This release arrives with a payload of controversy surrounding the 1.85:1, 1080p transfer--allegedly supervised by DP Frank Prinzi--and its revisionist blue tint, which quickly consumes the prologue to hasten the arrival of the titular night. This digitally-applied filter sometimes masks detail, sharp enough in one scene that Ben's hands look impressively damp after he washes them, yet so overly smooth just a few scenes later that his blood-soaked shirt looks airbrushed in. There's also a surprising amount of obvious compression in the opening establishing shots as the sky flickers with interference. It isn't a total disaster (not like the original The French Connection Blu-ray was), but it is a big disappointment. The 5.1 DTS-HD Master Audio is considerably better, with good stereophonic distribution of zombie uproar. Rears seem committed to presenting score and to more atmospheric effects like tapping and creaking, while the LFE channel is used generously, if inconsistently. As I haven't seen the film on DVD, reports of this remix omitting certain sound effects I leave for others to vet. The audio, as it exists, is more than adequate.

Not usually a fan of such things, I adore the isolated score option for this film: Watching it with only Paul McCullough's music on the soundtrack proves a powerful, surreal experience. All that patness and overwriting? Poof! Gone. On another track, Savini offers an engaged, good-natured commentary that doesn't so much narrate the action as augment it with stuff like, "Those are real tears!" and, "There's a gas pump...we see it, do they see it, yet?" He goes into his interpretations of Dawn and Day of the Dead and, in so doing, accidentally explains all the ways this movie is less interesting than, if as earnest as, Romero's Night of the Living Dead. It's actually a great yakker. I like Savini a lot. The theatrical trailer (HD) rounds out the disc-based experience.

Twilight Time's Julie Kirgo ventures outside of her comfort zone for the insert pamphlet on this one. I'm an admirer of Kirgo's from her work on stuff like The Big Heat and Swamp Water, but here, she makes a few broad generalities about horror films and their fans ("If you're the kind of horror fan (if such exists) that prefers just a modicum of gore...") that reveal a certain limitation when it comes to analysis of the genre. More, Kirgo's thoughts on feminism and the way it does or doesn't apply to this movie are limited to her identifying Barbra with Ellen Ripley, which is reductive and not very useful in elucidating where this remake may have fallen short of the original. When she suggests that the Judith O'Dea performance was a product of 1968 attitudes about the treatment of women, well...I'm going to push back a bit on that, too. Although Kirgo is both a good writer and a good historian, based on this essay I feel like she has a bias against horror that retroactively impacts some of the fine work she's done with noir, since horror and noir are opposite sides of the same nihilistic coin. 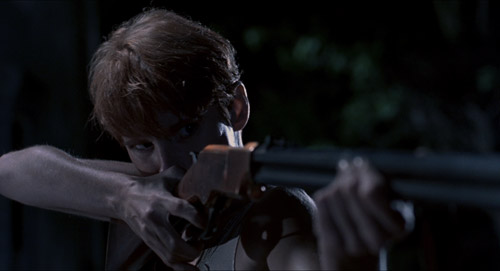 Savini Rocks! I especially liked tony Todd's performance, a WELL-ACTED film, don't you think, Walter? Patricia Tallman was GOOD, i thought, and I liked the adolescent {and ill-fated} couple. The "gas pump" carnage scene is still unsettling for me, I thought the remake version is JUST AS GOOD as the seminal Romero version, just in Different ways! tx for the fine review, as always,
Martin S.