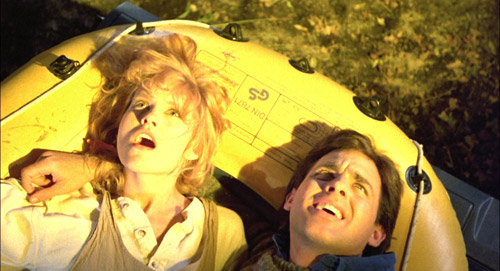 by Walter Chaw Boy, you know, I really like the Chiodo Brothers' Killer Klowns from Outer Space. I can't help it. I like it more than Night of the Creeps, more than Matinee, more than any other film that would see 1950s creature-features resurrected, be it through homage or farce or satire. I like it because it's unapologetic, and because its high concept is broad enough that there are sufficient gags to peanut-butter across the entire runtime. I like, too, that they don't end a scene without a groaner, meaning they're unerringly true to their stated mission of erecting a shrine to Irvin S. Yeaworth's The Blob (truer, even, than the contemporaneous remake of The Blob) and doing it with a relentlessly light touch. It's never scary (unless you're a true coulrophobe), but it is often uproarious--like when one of the titular alien Bozos squirts angry Officer Mooney (John Vernon, just fantastic) with gag flowers, to which Mooney, out of proportion to the affront, responds, "I oughta shoot you right now." I also appreciated the moment when head girl Debbie (Suzanne Snyder) asks why they're being shot with popcorn and her boyfriend Mike (Grant Cramer) replies, "Popcorn? Because they're clowns!" Well, no shit, Debbie, try to pay attention.

Not much plot to speak of: Mike and Debbie are making out on a rubber raft when a meteorite in the shape of a giant circus tent crashes in the forest. This causes backwoods idiot farmer Gene Green (Royal Dano) to exclaim things like "what in the hornswoggle?!" and "well I'll be greased and fried" before becoming the first of many cotton-candy entombed victims as the Klowns go on their merry rampage of people-harvesting, pausing only to place giant cherries atop the caustic pie-melted corpses of their victims. It's up to Mike, a pair of moronic ice-cream truck drivers, and overzealous Deputy Dave (John Allen Nelson) to rescue Debbie from the Klowns' child-entertaining, little-car-riding clutches. Luckily, Dave discovers that their weakness is their noses. Lucky for us, this doesn't happen before Killer Klowns from Outer Space turns Mooney into a ventriloquist's dummy for one of the monsters. It's a scene of real genius, made better still by Vernon's pitch-perfect Frank Drebin. Elsewhere, our heroes use their only weapon (a shotgun) to bar a door while the whole time I'm looking at the baton hanging off Dave's police belt. That's some good thinking there, guys. Honestly, what's not to love?

Equal parts cheesy and grotesque, the Klown effects are fabulous, the best Halloween costumes of all time. There's a cheerfully surreal quality to the film as well, with the baddies appearing in tableaux evocative of the Cenobites in Clive Barker's Hellraiser from the previous year and snatches of faux-gravitas in the middle of all that ridiculousness. Then there's the part where a talking clown mounted on top of an ice-cream truck tricks the monsters for a second to hilarious effect. The Chiodo brothers, cutting their teeth on various monster cheapies in the late-Eighties (Critters and its first sequel, for example--also thank them for the narwhal in Elf), don't take any of it seriously and, knowing better than to overstay their welcome, keep things brisk and brilliant. The picture works because it's full of joy and completely free of self-importance. I love the bit with the little girl and the Klown luring her away from a birthday party, a ridiculously-oversized mallet jutting out from behind its back; I love when a shadow-puppet show evolves into Washington crossing the Delaware; and I love that nobody in the film is nervous that a giant circus clown is approaching them at a bus stop in the middle of the night, carnivorous seven-foot-tall alien or not.

THE BLU-RAY DISC
Killer Klowns from Outer Space arrives on Blu-ray via a Fox-distributed MGM platter in an auto-starting 1.85:1, 1080p presentation that betrays in its softness and dinginess the film's low-budget origins. This is a title that could truly benefit from some high-end tweaking--the final chase through the funhouse spaceship, especially, begs for more brilliant colours and sharper detail--but ultimately the transfer matches our lowered expectations. The stereophonic 2.0 DTS-HD Master Audio is similarly fine but uninspired. Tinny and hollow, it's again low-budget all the way. The Chiodo Brothers--Stephen, Charles, and Edward--reteam for a commentary track ported over from MGM's Midnite Movies DVD that's collegial, informative, and self-effacing. They trainspot the worst of their lines ("Where'd they do the decoratin'? Clowns-r-us?" being a favourite) and comfortably acknowledge that the film was a lark, done out of a genuine affection for their craft and the B-Movies that inspired them. Their surprise that it's now something of a cult classic feels genuine and grateful.

A number of SD extras grace the platter, starting with "The Making of Killer Klowns" (22 mins.). Taped in 2002, it features funny B-roll of the Chiodos trying to direct someone in a "Clownzilla" outfit how to exude more presence, interspersed with the siblings rehashing stuff from the commentary. Though not essential, it's charming. "Komposing Klowns" (13 mins.) begins to exhaust the "K" thing, but what the hell; it talks about the process of scoring the picture in its circus-inspired, broken hurdy-gurdy music. "Visual Effects" (15 mins.) has optical-effects supervisor Gene Warren, Jr. sitting for a quick interview, revealing no real secrets but demonstrating more of the fun that everyone had with the project. All of these interviews, by the way, appear to have been likewise recorded in 2002. "Kreating Klowns" (13 mins.) is more of the same in a series of shorts that are becoming tedious and repetitive. I did enjoy the anecdote about a sequence with a balloon-tracking dog that was problematic because the balloons had a habit of popping. A brief note that the main Chiodo brother (Charlie) looks a lot like a scrawnier Mark Ruffalo.

"Chiodo Brothers Earliest Films" (7 mins.) is nifty early stop-motion stuff the boys did with a turkey dinner; watch it for the moment where Charles says, "Yeah, dad paneled the basement." The first of two "Deleted Scenes," which include optional commentary, is "Bad Experience" (2 mins.), the film's Phoebe Cates speech about why Debbie hates clowns. (The other, "Tightrope" (2 mins.), was cut from the spaceship escape and is kind of a cool example of what happens when a practical effect goes horribly wrong.) "Killer Bloopers" (3 mins.) is a lot of falling down, flubbed lines, a really funny bit where a corpse gets dragged by a motorcycle, and fog machines doing their job too well. Last but not least, "Klown Auditions" is a 4-minute clip of people practising with the Klown outfits, while "Holy Smoke" offers a TV-alternate version of a Vernon line. Two theatrical trailers round out the disc. Follow Walter Chaw on Twitter 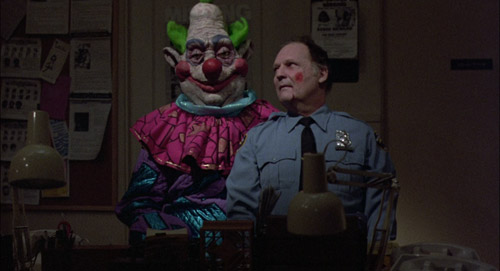