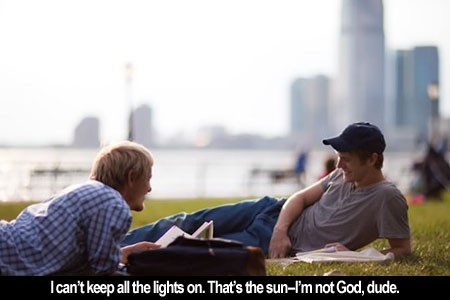 by Angelo Muredda Life imitated art when Ira Sachs's Keep the Lights On won the Teddy for best feature at the 2012 Berlinale. In the film, the same honour--albeit in the documentary category--goes to Erik (Thure Lindhardt) for his long-gestating profile of queer photographer and filmmaker Avery Willard, a project Sachs himself realized this year, concurrently with his fictional surrogate. Despite the intimate overlaps between Sachs's life and his most affecting movie to date, knowing the writer-director's background going in is hardly a prerequisite to falling for Keep the Lights On's honest charms. Sachs lets his biography seep into the material, effectively colouring it blue.

Like Andrew Haigh's Weekend, Keep the Lights On burrows into the hermetically-sealed world of two lovers, evoking its New York City milieu and upstate cottage country only when they come up for air. While that film kept up that intense focus by narrowing the timeline, Sachs follows Erik's relationship with publishing attorney Paul (Zachary Booth) from their golden days in the late-1990s to the present. Once Paul begins to show troubling signs of a serious drug addiction, what follows is an engaging hybrid of the star-crossed romance, the queer coming-of-age drama, and the illness movie, with Erik eventually serving as a doting caretaker to his increasingly vacant-eyed partner.

There's an undeniable power to Sachs's approach, which is to hit those seemingly familiar narrative beats through Erik's incremental growth as both an artist and a companion to someone who's slipping away. An early scene that finds him cycling through phone-sex partners with very particular tastes, slipping into the register that the new voice on the line most desires, is as savvy and economical as character introductions get. Without any traditional exposition, we learn that Erik's pleasure comes from his chameleonic adaptation to whatever the other person in a given situation needs. There's much at stake, then, in Paul's gradual dependence on something outside of their relationship, and the implicit threat that Erik will then have to carry on without his lover to define him. In that respect, Lindhardt, whose face is as weary as it is boyish, makes a fine canvas for Sachs's portrait of an anxious man who needs other people to activate him.

There's an ethnographic sort of interest to picking up with the couple after absences of several years, but the film's opaqueness about the passing of time can feel like an affectation--more a gravitas-effect than a consistent structuring principle. Though Sachs's sense of character errs on the side of idiosyncrasy (one of Erik's hook-ups beams, "I've got an English degree, I'm not some stupid faggot"), his portrait of the couple's surrounding community is oddly static and vague across these temporal jumps. We get little sense, for instance, of how either the publishing or the independent filmmaking worlds change over this tumultuous period, which saw both industries' distribution models radically transformed.

Missed opportunities aside, Sachs's innate knowledge of this world resonates through his strong choices, including the tender soundtrack of old Arthur Russell songs. Sachs more than ably fills the gap between Woody Allen's hyper-stylized visions of the Manhattan intelligentsia and Lena Dunham's glances at memoir-writing twentysomethings, and he does it through his attention to the social codes and mating habits--frankly depicted--of this creative class as it enters its thirties. What's most impressive, though, is the raw, clear-eyed depiction of the central romance, a universal yarn of love, loss, and self-help that's nevertheless grounded in the particulars of Erik's experience. Moving as Keep the Lights On is, the main takeaway is a sobering one: that a shared period with another person can be a fundamentally isolating, individualistic experience--the time in which we become the person we'll be next.

Mm, never heard of movie "X" before. Maybe if you add two more "X's" to that one I'd be interested.