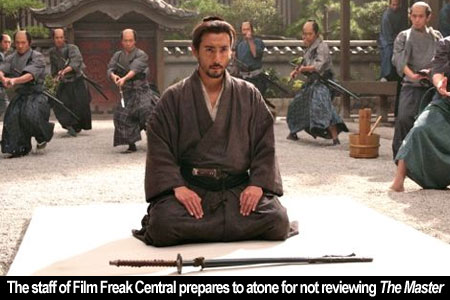 by Walter Chaw Masaki Kobayashi's 1962 masterpiece Harakiri is the height of austere--almost Noh--Japanese filmmaking. It lands somewhere between Ozu's pillow flicks and Kurosawa's Throne of Blood, and, of course, as Kobayashi is the auteur behind the Human Condition trilogy, that martial austerity, that antiestablishment mien, is to be expected, if impossible to ever truly gird oneself against. It's set in 1630, at the end of feudal Japan, when collapsing fiefdoms mean throngs of ronin overflowing into the countryside and, occasionally, asking for the right to commit ritual suicide in an "honourable" courtyard. Tsugumo is one such samurai, but before he's granted the privilege of dragging a sword across his belly, House of Iyi counsellor Saito insists on telling him of a previous penitent, Chijiiwa, who claimed he wanted to kill himself but only really wanted a handout. Seeking to make an example of Chijiiwa and the effrontery he represents to the Bushido code, the Iyi clan decides to force the issue--even after it's revealed that Chijiiwa has, somewhere along the way, pawned his iron for a bamboo stick with a hilt. It's a kind of torture, and everyone watches. Kobayashi goes into flashback, unexpectedly, telling the story of the young samurai we, at first, are complicit in mocking. We participate in his torture. We believe he deserves it. By the end of the film, we don't believe that anymore.

Takashi Miike's remake, Hara-Kiri: Death of a Samurai (hereafter Hara-Kiri), marks the second time that Japan's enfant terrible has gone to his culture's formalist well after remaking Eiichi Kudo's The Thirteen Samurai (1963) via the astonishingly good 13 Assassins. It follows the same plot, though the first time through I was disappointed with the ways in which Miike changed the Kobayashi, providing too much exposition here or too little there. In any case, I thought the central reveal happened much too early. But then I understood: Miike's film is set a few years after Kobayashi's; it trades in a different kind of realism altogether, earning its austerity in a different way. Tsugumo (Ebizo Ichikawa) this time around is clearly the avenging angel from the beginning--there is an expectation attached to this filmmaker and enough of a familiarity with the original (one presupposes) that the only point of a remake would be to not attack the hypocrisy of the feudal structure, but to challenge those expectations. Hara-Kiri isn't about the lies that institutions tell, nor is it about how the trials of the little man are nothing but a hill of beans in the grand scheme of things. Rather, Hara-Kiri is about how Miike is engaged now in commenting on the traditions of his nation's cinema. It's not much different from what Tarantino does with the western genre.

Consider the moment where Tsugumo reveals that he's humbled the clan's three best swordsmen, and consider that while Kobayashi chooses to keep Saito unaware that he's on a hook before the fisherman sets and reels, Miike chooses to jump immediately to the end. Consider, especially, how this Hara-Kiri has Tsugumo enact his ultimate act of vengeance with a bamboo sword instead of a metal one...and how that changes everything. Hara-Kiri is quintessentially post-modern. It has no meaning without knowledge of the original and Miike's other films; its message, if there is one, is that there's no such thing anymore as a meaningful proto-narrative--post-modernism has become the only lens through which we view anything. The picture suggests, above all else, that it's impossible to approach anything with a clean perspective. Ultimately, the only recourse is to come to welcome Pyrrhic victories as at least personal victories. Hara-Kiri is beautiful, brilliant, the product of a wildly prolific filmmaker who occasionally slips a movie past the guardians of our culture here in the West by dressing up genre fare as prestige (13 Assassins). Now he's made a movie that looks like a traditional samurai flick but actually challenges an entire tradition of samurai cinema. It's not about Bushido, it's about its representation. And it's awesome.

VUDU should send you a cut of my rental fee. Nothing of note out this week, seen "The Master", "Argo", and "Seven Psychopaths", and after a rough work week I'm just gonna want to stay in, smoke some bowls, and watch some disembowling.

Speaking of which, I would to read one of you guys rip into "Seven Psychopaths." I kinda liked it, but It has some major flaws.