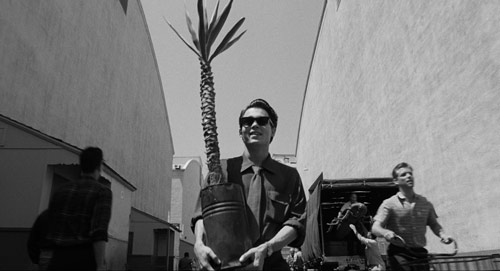 by Walter Chaw Raging Bull for starfuckers, Ed Wood is in a lot of ways the quintessential dissection of the allure of Hollywood, allying it more closely, perhaps, with a different Martin Scorsese film, The King of Comedy. (It's The King of Comedy recast with the stalked celebrity a willing participant in the stalker's obsessive lunacy.) Ed Wood diverges from most biopics in director Tim Burton's tactic of skewing the film towards the same sort of kitsch-surreal of Wood's own films, managing in so doing the trick that David Cronenberg performed with Naked Lunch: a hagiography that's as much critical analysis as hommage. It engages in a conversation about how Wood's films are seen at the same time that it endeavours to tell the highlights of Wood's life. The result is a picture that bridges the gap between cult and camp classic; the melancholic and the melodramatic; and the difference between a director of vision and a director with a vision that sucks.

Ed Wood is another of Burton's travelling freakshows stuffed full of social mutants with stars in their eyes. Here, The Amazing Criswell (Jeffrey Jones), Vampira (Lisa Marie), Tor Johnson (George "The Animal" Steele), and Bunny Breckinridge (Bill Murray) all find not only orbit around Wood's deranged charisma but also immortality in some of the worst, most earnest vanity pieces ever committed to film. Not a celebration of blazing incompetence (see: Forrest Gump) so much as a celebration of the dumb power of irrepressible optimism, the picture, like Burton's best works (Pee-Wee's Big Adventure, Batman Returns, Edward Scissorhands), concerns the ability of dreaming to empower the lonesome. Just a taste of a bigger world (usually in a love match) is enough for the Burton protagonist's fandangos to take flight--for good or for ill, his films are ferociously romantic.

The apple of Ed Wood's (Johnny Depp) eye is motion pictures (and angora sweaters), and he pursues the object of his affection with the same sort of doe-clouded eye that informs Depp's title character in Don Juan DeMarco. Wood makes his multi-hyphenate debut with Glen or Glenda, a film dealing with Wood's own secret transvestitism--prompting the producer to remind him that he doesn't fund personal projects, he funds garbage that earns money. Wood's muse isn't his lovely girlfriend Dolores (Sarah Jessica Parker), but rather scrap-heap fright-star Bela Lugosi (Martin Landau), a man who personifies Wood's idea of stardom as a ship in a bottle and movies as the one true means of perfect expression and immortality.

However much hoopla has surrounded Landau's exceptional send-up of Lugosi, Ed Wood belongs to Depp. His is a sort of benighted, bedazzled wonderment: He can't believe he's living his dream, and he's unable to recognize that he's surrounded himself with desperate weirdos and listless sycophants. He says more than once during the film that he's finally doing just what Orson Welles did--and while the first instinct is to laugh, the lingering aftertaste is a sort of tacit acknowledgement that he did exactly what Orson Welles did: he made a few movies he believed in for studios that generally didn't agree with him and mostly with the usual suspects. More importantly, he's on the tips of cinephile tongues long after his passing; unlike some of Welles's neglected late work, Ed Wood's stuff is eternal. (Commentary in there somewhere about the results of our 2004 election, I fear.) The pathos of Ed Wood lies not so much in the addiction and progressive obsolescence of Landau's Lugosi as in the knowledge that the dream factory seduced a legion of mud men incapable of the tinsel that Hollywood required with the siren's call of black-tie premieres and the adoration of a hermetically-sealed, airbrushed community. Burton's Hollywood is as insular and strange a fairytale creation as his Gotham City or the cake-box suburbia of Edward Scissorhands, and he peoples it with his usual collection of Billy Wilder outsiders and big-top attractions. Talent disparity aside, Burton is Wood, too--and that, if anything, is the running theme of Ed Wood. If you love movies, you've got a little Ed Wood inside you.

THE DVD
On its tenth birthday, Ed Wood gets treated to a Special Edition from Touchstone, appearing on the DVD format following multiple unexplained delays in a 1.81:1 anamorphic widescreen transfer. With the exception of a few white lines and a quick jitter early on before Lugosi goes on live television (resembling a reel change, it's ultimately in keeping with the theory of the film's basement inspiration), the hues in the greyscale are nuanced and affecting. The handsome image is matched by DD 5.1 audio whose dialogue is rendered with high fidelity and atmospherics spread out across the channels and booming besides. Note an otherwise innocuous scene where Lugosi receives his pay for Glen or Glenda: the sound of money crumpling and exchanging comes from over your right shoulder. Really nice work--even more so for its faithfulness to Howard Shore's underestimated score (which serves as just another link between Ed Wood and Naked Lunch). I like Danny Elfman sometimes, but Elfman is no Howard Shore.

The creeping suspicion that this is Tim Burton's finest hour might be behind the embarrassment of supplementary material accompanying Ed Wood, beginning with a film-length yakker featuring Burton, Landau, co-writers Scott Alexander and Larry Karaszewski, DP Stefan Czapsky, and costume designer Colleen Atwood. Landau introduces the track by doing Lugosi introducing the principals in toto as well as before each of them speaks; it's something that seems like common sense to have a narrator/moderator for large, piecemeal commentaries, but not too many DVD producers have embraced the practice. Burton is lively here (certainly more energetic than on the Sleepy Hollow disc), his enthusiasm for the piece and for Ed Wood--"There's a razor-thin line between great and terrible"--clear in his carefully articulated passion. I especially appreciated Alexander's observation that sneering at films is ugly when the objects of derision are created with integrity rather than venality. A rich, invaluable session full of errata and insight.

A "Music Video" (3 mins.) featuring some pretty funky graveyard dancing and film clips scored to Shore's Ed Wood title theme launches the special features (which begin, really, with fun menus that comment a little on the participatory aspect of motion pictures). Choreographed by Toni Basil, it's a neat short and oddly titillating to boot. "Let's Shoot This F#*%@r" (14 mins.) sees Johnny Depp in full drag in a meat locker introducing an atypical making-of piece posed with verve and a sense of humour. Burton, unless he's putting on an act, is just as whacked-out as you'd probably expect him to be in B-roll footage of him dancing euphorically behind the camera in time with Depp's meat-locker striptease. The most successful animator-turned-live-action director since Frank Tashlin, Burton's demeanour on set is simultaneously boyish and possessed; the strength of this docu is in just letting us watch him guide his rogues' gallery through its paces without annoying "cut-ups" or junket-style interviews. "The Theremin" (7 mins.) finds Shore discussing at length the theremin's use traditionally and in this picture in particular. A smart, fascinating docu that's at least eighty minutes too short (rejoice, however, as the same year's feature-length documentary Theremin: An Electronic Odyssey is readily available). "Making Bela" (8 mins.) focuses on Landau and ace makeup man Rick Baker (the two Academy Award winners for this film) as they transform this actor into that actor. It's really such a subtle make-up job that I confess I was a little taken aback that Landau looked like Lugosi neither on Oscar night nor in his interview on this disc. Stake through the heart when Baker confesses that he's a bigger fan of Boris Karloff than of Lugosi ("Karloff did not deserve to smell my shit!"), though he redeems himself with the admission that he so wanted to work on Ed Wood, he offered to do it for free. The extent to which Landau was transformed is really amazing; the extent to which that transformation is invisible is astounding. Another great extra. 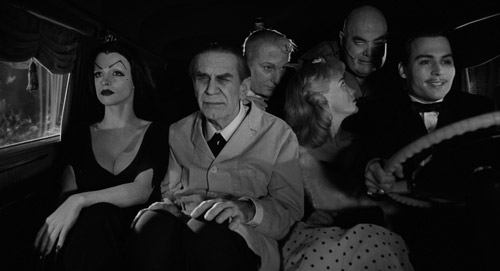 Continuing, in "Pie Plates Over Hollywood" (14 mins.), production designer Tom Duffield relates how he came aboard the project at the eleventh hour. As in "Making Bela," he outlines the differences between doing colour and black-and-white films. (It's all in the contrast, baby.) It's an exhaustive and informative featurette, with Duffield walking us through various sets and scenes, including neat background art barely glimpsed in the finished film but deserving of this sort of archiving. Icing the cake, however, are five deleted scenes also presented in anamorphic widescreen. More than just filler, it's impossible to imagine Ed Wood without these scenes once you've watched them (much like the Dallas cocooned sequence in Alien). The first two involve the gang breaking into the prop house and making their octopus-laden escape, while the next is a brilliant sequence of the (Tor) Johnsons at dinner. An extended break-up post-eviction between Wood and Dolores is the fourth; and the final one, "Que Sera Que Sera," gives us a bit more time with Bill Murray in a meat locker--which is, of course, a wonderful thing. Pushing "right" at the "Que Sera" option on the "Deleted Scenes" sub-menu unlocks a sixth elision wherein Lugosi reminisces about his theatre days while Wood brainstorms a way to resurrect his hero's career. (I've heard tell of another embedded docu but was unable to uncover it.) A theatrical trailer rounds out the sterling presentation. Originally published: November 30, 2004.

THE BLU-RAY DISC
by Bill Chambers Buena Vista's catalogue releases are almost as big a crapshoot as Universal's, but thankfully Ed Wood lands in their upper echelon of Blu-ray titles, with a 1.85:1, 1080p transfer that dances lightly with grain. The naturally-defined image features inky but not voidal blacks, bright whites that never clip, and between those two poles, a nuanced palette of greys. It looks so filmic as to honour Tim Burton's attention to not just period details but cinematic conventions of the Fifties--low angles, spartan sets, high-key lighting--as well, and is easily confused at times for a product of the era being satirized, which was less true of the disc's DVD and LaserDisc counterparts. The presentation both invites and rewards still-frame inspections of the onscreen bric-a-brac, including a stack of film cans in an exploitation producer's office Sharpie'd with such previously-illegible titles as Fangs of the Temptress and She-Men of Mars. (What I would give to watch something called She-Men of Mars.) It's gorgeous, folks, and the attendant 5.1 DTS-HD MA track revitalizes Howard Shore's pitch-perfect score, which has never sounded warmer, deeper, or bigger. The whole mix in fact breathes in a way it didn't before--each new location has a different tonal character. Extras have been ported over from the 10th anniversary DVD intact (in standard-def where applicable); HD trailers for Frankenweenie, Marvel's The Avengers, and Who Framed Roger Rabbit cue up on startup. 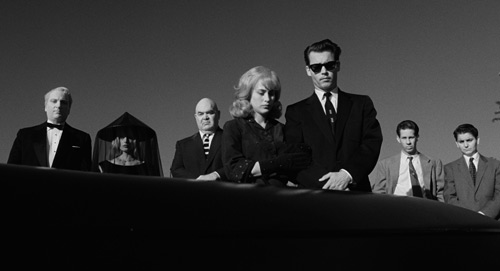 Wood had plenty of work ethic and motivation. He just lacked talent, timing and luck, items which are not so easily explained. The great Martin Scorsese himself can't tell the difference between suck and cool anymore, but I'd rather watch a Wood flick any day over "Hugo."