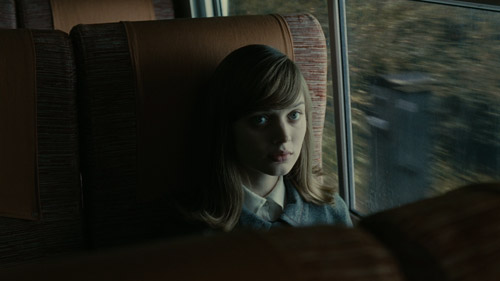 by Angelo Muredda Like so many of his recent dioramas, Tim Burton's Dark Shadows starts off looking suspiciously like a real movie. The director's tendency to Burtonize cherished texts into gauche self-portraits is suppressed in an economical opening that tells with a straight face the dolorous tale of Barnabas Collins, once-imprisoned and newly-freed vampire star of Dan Curtis's late-afternoon soap. The mood is sombre--a nice hat-tip to Curtis's morose series, which, if you'll pardon the wonky chronology, played out like a Smiths song drained of irony. Alas, before long Barnabas awakens in 1972 to meet his distant relatives and dissipated hangers-on, and the mere presence of pasty-white, pink-shaded, ginger-wigged Helena Bonham Carter as family psychiatrist Julia Hoffman is enough to break the spell. Carter's mannered and carefully-sculpted weirdness alerts us that this is yet another wax museum standing in for a film no one had the heart to finish.

Since Charlie and the Chocolate Factory if not even earlier, Burton has been dedicated to systematically dismantling Johnny Depp's credibility as an actor of range, and Dark Shadows feels like a culmination of his efforts. Sporting a Tegan and Sara haircut and Robert Smith makeup, Depp joylessly drifts through some admittedly beautiful sets, dropping witticisms about women's "fertile birthing hips" like he's burlesquing Johnny Depp at a party. At least the character's backstory furnishes him with a decent excuse for the transatlantic accent he hasn't been able to shake since the Pirates movies: Barnabas is from Maine via Liverpool, see. At any rate, it's hard to blame Depp for phoning it in when there's so little for him to work with. Seth Grahame-Smith's moth-eaten screenplay sets Barnabas up as an analogue of sorts to the Penguin in Burton's Batman Returns--a wealthy heir jettisoned into a carriage/casket, come back for his birthright in the town that forgot him.

That's a promising setup, but its potential is squandered in an utterly inconsequential narrative arc about Barnabas bolstering the long-wasted Collins family fishing industry against its sole competitor, headed by dark arts mistress and old flame Angelique (Eva Green). Although Green has fun channelling Glenn Close and makes the most of Colleen Atwood's outrageous early-'70s dresses, for a villain she's stuck in an odd holding pattern, appearing only to signal either a change in the Collins family fortune or the start of a bloodless sex scene staged by a delicate manchild who's never seemed to know what sex looks like. Angelique's prolonged tango with Barnabas should be fun, but mostly it registers as a diversion from the A-plot, about Barnabas's infatuation with new governess Victoria (Bella Heathcote), who bears a striking resemblance to a former lover jealously murdered centuries prior by a raging Angelique.

To be fair, this narrative deadweight is built into Burton's conceit, which apes the one-damn-thing-after-another progression of the series. Sometimes this episodic structure pays off. As Collins family matriarch Elizabeth, Michelle Pfeiffer deftly rides the wave of these multiplying tangents, convincingly nonplussed by revelations of werewolf children and spectral sisters-in-law. She gets a great Oprah-Uma moment with Green, where Burton cutely reproduces soap-opera blocking: "Angelique," she calls out across what is clearly a stage to Green's "Elizabeth!" But there's a difference between a tribute and a crutch, and the film's messy plotting can't be explained away by a condescending gesture to the half-formed nature of the source.

Burton won't commit to an approach to this material, and the actors suffer for it. An early montage of Barnabas's adaptation to his new digs scored to The Carpenters' "Top of the World" goes for light-hearted period farce that's jettisoned as soon as he remembers he's a vampire who needs to feed; Depp always seems unsure about how violent his character is supposed to be, making Barnabas's admission that he's neither a good man nor a gentleman baffling. Green plays it broad to Pfeiffer's bored, and poor Heathcote, the ultimate in neatly hair-parted Burton maidens, looks like a refugee from Sleepy Hollow's torch-lit town-hall dance; ostensibly the female lead, she vanishes without explanation for entire 30-minute stretches. By the end, this tonal mishmash turns what might have been an earnest adaptation by a fan into an overstuffed gothic turkey that imitates the director's own oeuvre as much as it does the TV show. Think Casper with Green as a discount Cathy Moriarty. 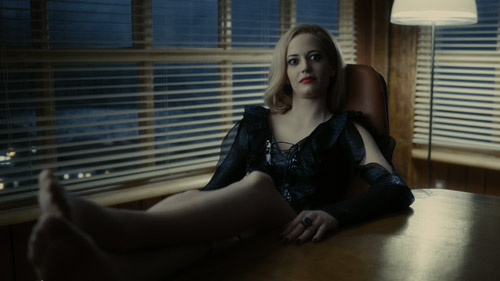 THE BLU-RAY DISC
by Bill Chambers Warner brings Dark Shadows to Blu-ray in a 1.78:1, 1080p presentation that could be glossier, I suppose, but the picture's silky glaze is surely intentional on the part of Tim Burton and DP Bruno Delbonnel, late of the heavily-stylized Harry Potter and the Half-Blood Prince (which similarly features some remarkable aerial views of a train snaking through the countryside). The film was digitally processed so much in post that there hardly seems to have been a point to shooting it in 35mm, but as a series of baroque paintings the denoised, desaturated image is undeniably enchanting to look at, and seemingly compromised in its transition to the small screen only by the smallest traces of banding. (Still, as the movie barely occupies one layer of this BD-50, it seems like an issue that was easily resolved with a more generous bitrate.) The attendant 5.1 DTS-HD MA track, though maybe a little sharp, delivers the '70s tunes with a lot of flair and sounds impressively detailed during the most cacophonous moments; bass is deep and satisfying.

Extras are limited to nine semi-satisfying HiDef featurettes--viewable within or without a Maximum Movie Mode interface--and five deleted scenes (also HD). As to those "Focus Points," they begin with "Becoming Barnabas" (5 mins.), in which Johnny Depp says he finally got to wear latex appliances--fake ears, a fake nose, fake fingertips--after years of begging Burton to let him alter his physical appearance with prosthetics. What's odd is that Depp's hypnotic hand movements are singled out, but nobody comments on how they mimic Martin Landau's/Bela Lugosi's in Ed Wood. (I figured he was paying homage.) "Welcome to Collinsport" (4 mins.) is a bit about the massive, functioning fishing village production designer Rick Heinrichs built at Pinewood Studios, while "The Collinses: Every Family Has Its Demons" (7 mins.) spares a soundbite or two for each of the actors playing the Collins family. "[Bella Heathcote] looks like someone who's been reincarnated," Burton says. I think it's a compliment. Depp points out the obvious here, by the by: that Burton keeps casting Carter, his wife, as someone eventually murdered by Depp, his muse. "I don't know what that's about," he demurs. The character of Angelique meanwhile gets a discrete segment with "Angelique: A Witch Scorned" (3 mins.), in which Eva Green flashes a man-eating grin and calls Angelique "not completely mad. Tiny bit."

Depp declares 1972 "maybe the worst time aesthetically in the history of human existence" in "Reliving a Decade" (5 mins.), and in "Alice Cooper Rocks Collinsport" (2 mins.), he reveals that "The Ballad of Dwight Fry," which Cooper performs onscreen to great effect in Dark Shadows, is a shared touchstone between Burton and himself. "Dark Shadowy Secrets" (4 mins.) is a confused piece about the production's use of greenscreen and its lack thereof, yet I was delighted to learn that the red flames caused by the cannery explosion were not a photographic effect, but rather the result of using methanol instead of the usual stuff. "A Melee of Monstrous Proportions" (4 mins.) documents the climactic monster rally, with Chloë "Hit Girl" Moretz coming in for stunt coordinator Eunice Huthart's praise. Lastly, "Dark Shadows: The Legend Bites Back" (2 mins.) finds Lugosi getting the shaft again as Depp credits Christopher Lee with playing the definitive Dracula. "Who wants immortality? I can't think of anything more terrifying," Lee himself opines. As if he's a mere mortal like the rest of us.

If they indeed constitute the sum-total of elided footage, the Deleted Scenes (6 mins. in toto) sadly extinguish the fantasy that a better version of Dark Shadows lies on the cutting-room floor. Arguably, the narrative's biggest problem is Victoria's disappearing act, and while she appears in two of these additional scenes, one of them is disposable and the other, alluded to in the finished product, has her sharing secrets and cigarettes with Moretz's Carolyn in a way that feels out of character--even this wispy sketch of a character. Previews for Warner's Blu-ray 3D slate and some dtv basketball movie I skipped past immediately cue up on startup of the platter; the packaging also contains a DVD of the film and download instructions for the Digital Copy. 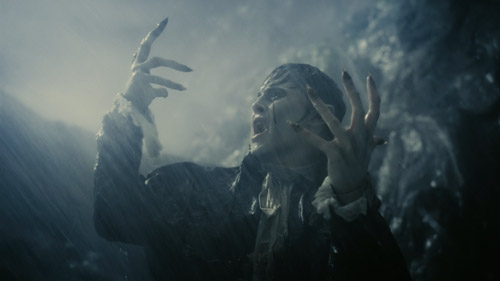