**/****
starring Colin Farrell, Kate Beckinsale, Jessica Biel, Bill Nighy
screenplay by Kurt Wimmer and Mark Bomback, based on a screenplay by Ronald Shusett & Dan O'Bannon and the short story "We Can Remember It for You Wholesale" by Philip K. Dick
directed by Len Wiseman 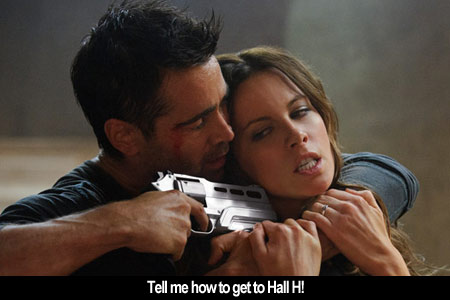 by Walter Chaw For about forty minutes, maybe less, Len Wiseman's ironically forgettable Total Recall redux demonstrates energy, inventiveness, and proper respect for Blade Runner's production design, at least, if not for its own predecessor. By the end, it's just a bigger-budget Lockout that not only doesn't do anything with the Philip K. Dick source material, but is also wholly incapable of trumping the absolute, tripping-balls perversity of the Paul Verhoeven original. It's a problem that not even resurrecting the three-titted hooker can solve, especially since her appearance in this Total Recall highlights not the mutagenic strangeness of Mars but the oddness of...Australia? It's Colin Farrell this time around as everyman Douglas Quaid, stepping in for Ah-nuld of course and, in so doing, making the film's one possible narrative reality that Quaid is actually a Bourne-like super-agent less a possibility. Farrell is in fact too good at being ordinary--the long introduction that establishes Quaid's boring workaday existence is arguably the best thing about the whole thing. There's real pain there when he doesn't get a desired promotion, real desperation in his coming home to a sleeping wife before going out again to drink cheap beer with his assembly-line buddy. The result of Farrell's being kind of a really great actor is that he (like Guy Pearce in Lockout) instantly reveals the vehicle and its execution to be not nearly good enough, its aspirations not nearly high enough. And whatever questions the picture asks in the pursuit of metafiction, well, Farrell is capable of conveying more.

Quaid, tired of his workaday drudge commuting from Australia to London via a centre-of-the-earth elevator/subway, visits a company called Rekall to be implanted with memories that will ostensibly spice up his grey study. His hot wife Lori (Kate Beckinsale, Wiseman's own hot wife) comments on her hotness at one point in a way that speaks true to every man's insecurity about having married up; and his world, devastated by a chemical war that has left only two habitable places (luckily, neither houses many minorities--and how much more interesting is this movie instantly if the two places left are Japan and Sudan?), is nonetheless astonishingly technologically advanced. I don't really want to get into it. During the Rekall procedure, Quaid--pointedly reading a ratty paperback of Ian Fleming's The Spy Who Loved Me--requests Bondian dreams; something goes wrong, a police strike-force breaks in, and Quaid discovers, in a scene stolen from The Bourne Identity, that he's already a super-spy. If it's all not obvious enough, the final shot of the film is a lingering hold on the Rekall billboard. Here's the thing: Verhoeven's Total Recall isn't obvious. Whatever its excesses and grotesqueries, Verhoeven's version is smart, sharp, and ultimately respectful of its audience's ability to appreciate ambiguity. It's a risky film, where Wiseman's is as smooth and frictionless as the latex his wife wears in the Underworld saga. I think that once Farrell steps into the agent role, he has difficulty convincing us he was ever in the factory-worker role; because he lacks Schwarzenegger's innate dorkiness, suddenly this Total Recall is only complex for that dummy Quaid. It's not an existential crisis, it's an empty action movie, and Farrell knows it. And so do we.

Beckinsale has become an extremely credible action heroine, however. Scenes where she springs into feral, acrobatic motion are tight and exciting. I love the rooftop chase for its simplicity, for Wiseman's casual subversion of an action-movie cliché, for the smart use of environment in its maze of barriers and openings. I like a moment where Wiseman pays homage to the death of Zhora in Blade Runner and that film's visually-arresting umbrellas, and I even like the resolution to an otherwise-boring and overlong hover-car chase that Spielberg did better in his Dick-flick, Minority Report. I do wonder if Wiseman isn't something like the Von Sternberg to Beckinsale's Dietrich, though, in that as soon as he's not shooting Beckinsale doing her thing, the movie loses its sparkle, such as it is. Look at the care Wiseman lavishes on a sequence in which Lori slides across a floating elevator and in through an access panel: there's more timing and invention in those few seconds of film than in the entirety of Total Recall's bombastic, senseless finale. The only time someone like Kate Beckinsale could be the most notable element of a movie also starring Farrell and, in supporting roles, Bryan Cranston and Bill Nighy, is when her husband's directing it. As the picture lumbers along, shedding sense and invention and gaining an army of the stupid robots from I, Robot that function like the stupid robots from Episode I, it becomes clearer that Total Recall doesn't have anything up its sleeve besides that one sleight of hand. Beckinsale looks like a star in it when we know that she's not; I've already pretty much forgotten the rest.

Holy crap did this movie suck. The excessive use of artificial lens flares was particularly obnoxious. That and empty, nonsensical action. Not sure why Wiseman gets credit for constructing good action scenes.