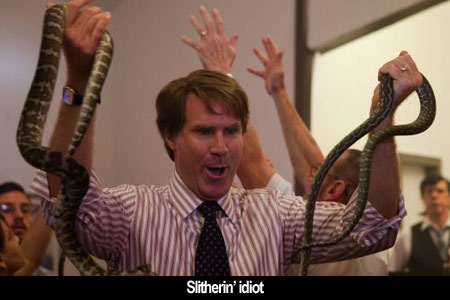 by Walter Chaw Empty, apolitical, and ultimately cowardly, Jay Roach's The Campaign appears this election year with a promising head of steam that fast dissipates. Honestly, the only thing really memorable about the film to me is that the high-powered rifle that shoots Will Ferrell's corrupt Democratic congressman through the leg is a crossbow in the ubiquitous TV spots. Blowback from the Aurora shooting? Possibly--but if that's a case, why wasn't it changed in the movie proper? And if it is changed some time between the press screening and Friday's opening, what will they do with the next scene when someone says something about how great it is that a candidate received a bump in the polls for shooting someone? A better question is how all of this could go down without mention of the National Rifle Association. Being more comfortable with assaulting the general stupidity of rednecks, gentried or free-range, than the dangerous politicism of the NRA is just one example of how The Campaign never misses a chance to miss a chance. Except for a couple of brief swipes, it doesn't even take on the Bible Belt, or gay marriage, or the hypocrisies of our representatives beyond the not-stunning revelation that Big Money controls the course of our country's political fortunes. On the scale of observations, that one fits snugly between "duh" and "no shit."

Cam (Ferrell) has run unopposed in a North Carolina backwater for multiple terms. Imagine his surprise, then, when weird Marty (Zach Galifianakis), backed by the powerful industrialist Motch brothers (John Lithgow and Dan Aykroyd), enters the fray. Seems the Motches, a variation on the wealthy world-makers from Aykroyd's Trading Places, want to "insource" a Chinese factory to North Carolina in defiance of all federal statutes regulating child labour, pollution, safety, and wage; Marty is just the patsy recruited to look the other way. The first crime of The Campaign is that it doesn't have any courage and so focuses more on a sappy redemption story where, in the Apatow school, what's been pleasantly ugly suddenly becomes unpleasantly saccharine. The other crimes of The Campaign involve its abandoning of political platforms too early and often to go back to old saws of Will Ferrell drunk, Will Ferrell doing Ron Burgundy, and Zach Galifianakis acting fey and peculiar. I'm not saying I didn't laugh, I'm saying that I laughed, so what?

It's all the more disappointing, considering the movie opens with Cam declaring to his campaign manager (Jason Sudeikis) that the only thing he needs to get his constituents on board is to mention militarism and namedrop Jesus and America. It's not much, but it's promising in a way that Talladega Nights paid off. The film's most inspired sequence is probably when Cam, incensed that Marty has gotten a little too personal in a campaign commercial, seduces Marty's wife Mitzi (Sarah Baker) and...well, that would be telling. It's a moment of escalation that suggests what the picture might have been had it focused more on making a statement than on playing both sides against the middlebrow. Karen Maruyama plays an Asian housekeeper forced to speak like a Gone with the Wind happy mammy (for a boss (Brian Cox) pining for the "good ol' days") in a pretty good joke carried until it becomes the racial caricature it's initially commenting upon, while Dylan McDermott is not uninteresting as an evil campaign manager. But what The Campaign does best is pull into sharp relief exactly how incomparable--and incomparably bleak--a satire is Idiocracy and how good and brave a satirist is Mike Judge. Actually, maybe what it does best is demonstrate that the actual 2012 American Presidential campaign is already so ludicrous that it's pointless to even try to satirize it.

I thought the first half was funny, but somewhere it lost any energy. I'll disagree with Walter about the wife seduction scene, as I think it might be at the place where the movie completely derails. Infidelity never seems like a good source for comedy. You could tell that scene killed the mood of the audience I saw it with. It would have been nice to see a bit more of Zach's innocent character countering the ruthlessness of his opponent and the political process. Instead, Zach almost-immediately becomes an ass, and the 2 leads are just insulting each other but not in very interesting ways. The film is funny half the time and feels really neutered. Like a film version of a Cliff Notes on US Politics.