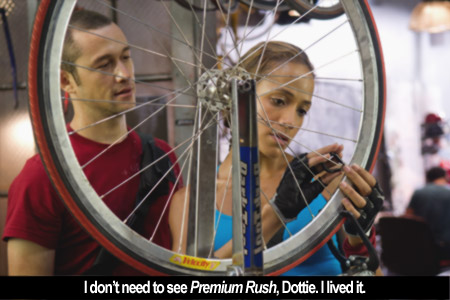 by Angelo Muredda Those who had hoped Joseph Gordon-Levitt's presence in The Dark Knight Rises signalled some kind of Tim Drake extravaganza only to make do with his dour Robin surrogate John Blake ought to perk up, for Premium Rush is here. David Koepp's unabashedly silly, good-natured courier thriller is curiously light on thrills, its daytime climax of a bike race in the park about as low-stakes as Harvey Keitel's hot pursuit of a pickpocket simian in Monkey Trouble. What it lacks in dramatic heft, though, it more than makes up for in its fleetness and tight grasp on cartoon physics, as well as its smart use of Michael Shannon as an unstable roadblock and Gordon-Levitt as just the blunt instrument to push past him, a chiselled boy wonder who knows his way around a fixie, i.e., the lightweight single-gear bike to which he's practically glued.

For what it's worth, the scenario is bunk--a MacGuffin delivery and interception script to rival Johnny Mnemonic's. Gordon-Levitt is Wilee (yes), a New York City messenger entrusted with ushering a nondescript envelope from an acquaintance at Columbia University (Jamie Chung)--where he studied law but refused to take the bar, lest it prematurely age him into a guy in a suit --all the way over to Chinatown by 7 p.m.. From go, Wilee is held up by, who else, a guy in a suit, a debt-ridden NYPD cop ludicrously named Bobby Monday (Shannon). Bobby has his own reasons for wanting to get his hands on the precious cargo before it lands at its destination, a mysterious woman named Sister Chen, and he isn't above chasing down a fresh-faced cyclist in broad daylight to get it.

Koepp jacks up the material with requisite thriller-on-a-deadline recaps and time-jumps cribbed from the usual suspects: Tom Tykwer, Christopher Nolan, and so on. Yet his steady directorial hand has a touch, if only a touch, of the masterly and recently-departed Tony Scott about it. The chase sequences are frenetic without losing sight of geographic specificity or spatial coherence, and the shot length is nicely levelled even in busier moments, a welcome contrast to Nolan's hot-mess school of cutting. The frequent digital-map overlays--explained away as what Wilee sees when he looks at his phone's GPS app--are too cute by half, sure, but they're nicely paired with real-world locations, and they do the job. So does the stunt team (partially composed of actual bike couriers), who ground the Looney Tunes action in largely-undoctored visuals of cool tricks in tight spots.

The ace-in-the-hole, however, is Shannon, who's the real Wile E. Coyote of the piece. Shannon recognizes he's in a quality B-movie without condescending to it, and gives the performance of a liberated man; this is no Al Pacino paycheck job, though you do incidentally hope the money was good. Bobby is a funny guy who justifies punking out on a watercooler chat at the station at one point by saying he forgot his bullets, and who can't resist asking the gambling enforcer who's beating him up if his phonebook's in Chinese. You have to figure this conscience-free degenerate is a welcome shake-up from the addled Protestants Shannon has played in Take Shelter and "Boardwalk Empire", although that might be a biographical fib, given how long Premium Rush sat on the shelf. His manic energy--"C'mon, son, this is silly," he calls out to Wilee: "You're gonna skin your knee"--ought to be spread around a bit more liberally, to be sure; poor Dania Ramirez plays Wilee's girlfriend as someone defined only by her choice of ride, a bike with a brake. But that PG-13 homeliness is also a key part of the package: a quaint thriller that looks like a cartoon, sounds like an energy drink, and has little use for guns or brakes.