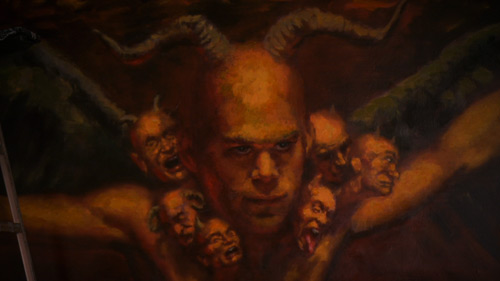 by Bill Chambers LIGHT SPOILER WARNING IN EFFECT. My favourite episode of "The Incredible Hulk" is the two-hour premiere of the second season, "Married." One of the unfortunately-few instalments written and directed by series creator Kenneth Johnson (a genuine pulp talent), it sees David Banner falling in love with the terminally-ill shrink (Mariette Hartley won an Emmy for the role) helping him contain the Hulk, a hypnotic process that involves David visualizing the Hulk trapped in a giant birdcage in the middle of a pristine desert--a tableau that clearly inspired the dream vistas at the outset of Tarsem's The Cell. Kindred spirits, they eventually marry, but although unleashing the Hulk protects her from harm when external forces threaten her life, it can't save her from the Grim Reaper. "Married" ends on an unusually hopeless note as a young boy who befriended the doctor informs David he's going to devise a cure for her disease when he grows up and David more or less tells the boy he's deluded. One of the most devastating pieces of genre television ever produced, it really could've been the series finale. Unfortunately, the show continued long enough to lapse into self-parody and longer still. Much like "Dexter"--though come to think of it, that happened about halfway through the pilot.

I thought of "Married" a lot during the agreeable final episode of "Dexter"'s fifth season, in which the only woman to ever truly accept Dexter abandons him because the homicidal impulses that made her sympathize with him were effectively cured by the completion of her Dexter-assisted revenge on a group of men who held her captive and did stuff to her. She recognized the insatiability of his bloodlust, and though she didn't judge him for it, she didn't have the will to stick around. As in "Married," a clueless child ultimately consoles Dexter, but he's tenderer in his dismissiveness. This, too, would've been an ideal ending to a wheel-spinning series that is essentially Jekyll & Hyde in a modern context, since the presumed end game of vanquishing Hyde won't turn back the clock; there is still the matter of reaping what Hyde sowed. Proving that Jekyll is destined for solitude is conclusive/conclusion enough.

Curiously, the fifth season doesn't have much bearing on the sixth, at least where Dexter's emotional state is concerned. You could fanwank that his first victim in this go-round, an alleged wife-beater-cum-murderer, is a tribute to the erstwhile Lumen, but in a season that is constantly raising the ghosts of Trinity, Lundy, and the Ice Truck Killer, it seems odd that she's mentioned by name only once. On the one hand, this is a good thing, because it doesn't tarnish fond-ish memories of the previous season. Yet it also underscores the maddening ease with which the show springs back to status quo, which doesn't bode well for the satisfying cliffhanger to this year's finale.

This particularly dire and dumbly-plotted season of "Dexter" begins with Dexter attending his high-school reunion in order to off an old classmate, who may or may not have killed the only girl to show the teenaged Dexter any kindness. The water-treading pacing of this season leads to this slight riff on Grosse Pointe Blank spilling over into the next episode, and what should play as irony--the class beauty queen (the ubiquitous Kristen Miller) demanding to fellate Dexter--mostly comes off as the show meeting its cable-kink quota. Perhaps Dexter's too superhuman now for us to get any kind of vicarious thrill from these geek-revenge moments.

While this is going on, Dexter's sister, Deb (Jennifer Carpenter, who grows on you--like mold), is busy castrating love interest Quinn (Desmond Harrington, no Brando), first by taking the lead in a Collateral-esque nightclub shootout, then by accepting a promotion to lieutenant, thus making her his boss. Eventually she will turn down his marriage proposal, or more accurately belittle him for it. It seems a funny bit of schadenfreude until you realize this season is going to indulge in the downward spiral of a character, Quinn, who can't support the weight of anything like tragedy. It doesn't help that the show simultaneously drops cold his crusade to catch Dexter, robbing Quinn of what little dramatic purpose he served. (Similarly AWOL: Dexter's adoptive children.)

Colin Hanks and Edward James Olmos play the season's BigBad(s). If having two heavies seems innovative, recall that Dexter took on a whole cabal just last year. Olmos is a theologian who's convinced his lonesome disciple Hanks that they're the two witnesses described in Revelations as bringing about the End of Days; their crime scenes are awesomely grisly tableaus that go farther than "Dexter" ever has in terms of gore and sheer perversity. (Think intestines replaced by snakes and mannequins with human heads on horseback.) Alas, the show's religious vocabulary is laughably limited, which is OK for the generic pieties spouted by born-again Brother Sam (Mos, formerly Mos Def) but not for these so-called experts, cardboard didacts who sound suspiciously like WIKIPEDIA entries incarnate. 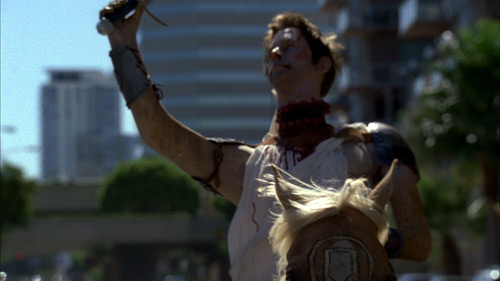 So Dexter, as yoozh, pursues the killers privately, hoarding evidence and doing the bare minimum of police work that will keep his moron superiors at bay. At one point, Masuka's new intern Josh Cooke (a total Hey! It's That Guy!, meaning his surprise turnabout isn't much of a surprise) admires Dexter's handiwork, prompting Masuka to say, "This is Miami Metro. We're rock stars." I like to believe that Masuka (C.S. Lee) is being tongue-in-cheek, but I have my doubts. The one thing that gives me hope is the installation of Detective Mike Anderson (the charismatic Billy Brown), whose no-nonsense style is in such stark contrast to these self-involved, anti-intellectual Keystone Cops as to suggest self-awareness of a sort.

Anyway, this is the season with promotional artwork (reproduced on the Blu-ray cover) featuring Dexter standing in front of a blood-spatter pattern that forms a pair of angel wings. Coincident to Dexter placing son Harrison in a Catholic preschool (because it's reputable), he spares the life of Malcolm X Lite Brother Sam, who, despite his constant proselytizing, becomes one of the more benign figures to ingratiate himself in Dexter's life. Of course, his true purpose is not to open Dexter's mind to the possibility of a higher power (despite much lip-service in that direction) but to be the unthreatening opposite to Olmos's and Hanks's fundamentalist extremists. It's a sad state of affairs when a show whose title character is a homicidal maniac feels the need to equivocate like this, and as Dexter's patented eurekas go, the one that closes out the season--that some people use the Bible for good while others use it for evil--is a personal low in triteness. I can't wait until "Dexter" takes on abortion, gun control, and the obesity epidemic.

Mos is great, by the way. Hanks? Not so much. He basically revives his performance from the suitably creepy Alone with Her, a found-footage joint in which he plays a hi-tech voyeur who plants cameras inside his dreamgirl's apartment, then weasels his way into the woman's life based on the intimate details he's gleaned from listening to her half of phone conversations and watching her masturbate with a hairbrush. The problem is that a cyber-stalker and a doomsaying nutcase are very different animals, and the persona that's intimidating on a one-to-one scale just isn't credible in a terrorist context. Aside: Someone at "Dexter" must be a big fan of Alone with Her, as Hanks is reunited with co-star Jordana Spiro towards the end of his arc. "Deadwood"'s Molly Parker, meanwhile, appears as Hanks's older sister. After conveniently providing Deb reams of unsolicited backstory, she says, "I don't know why I'm telling you this." I'm convinced it was an ad lib born of Parker struggling to make the scene make sense to herself, and I wish they'd given her a more dignified exit. She's lovely.

Lastly, I want to mention "Nebraska," a contender for the worst episode in the history of "Dexter". Dexter goes on a road trip with dead brother Brian (Christian Camargo), a.k.a. the Ice Truck Killer, to a backlot digitally posing as the titular state. The devil to Harry's angel, Brian convinces Dexter to bang a cute cashier and steal her gun--one that will not, contrary to Chekhov's maxim, meaningfully resurface--and is frequently seen stuffing his face with food, which I guess means Dexter's eating for two? Must be symbolism. Soon Dexter gets what he came for: a confrontation with the Trinity Killer's son Jonah (Brando Eaton); but he chooses to let the kid live, exorcising Brian in the process. I hate this episode for several reasons, some superficial (Camargo makes my skin crawl), some pedantic (if Trinity is still on the loose as far as several law-enforcement agencies are concerned, how is Dexter able to so effortlessly obtain Jonah's home and work addresses?). But mostly I hate it for basing an entire episode around my least-favourite Dexter convention: Dexter conversing with personifications of his subconscious, always sans witnesses. The reason America loves "Dexter" is because he's not a serial killer but, increasingly literally, Batman. To me, though, he's starting to feel a bit too much like Mike Judge's Milton, the nerd working under de facto jocks (much like Dexter) who openly fantasizes setting the building on fire once his boss is out of earshot. I'm not saying these killings are all in his head, but better not touch his stapler. 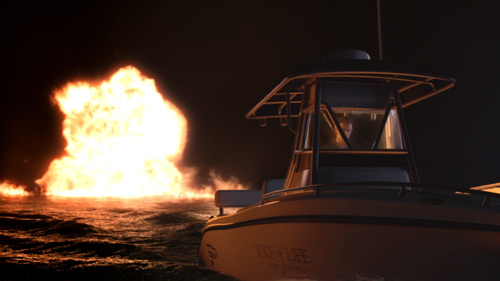 THE BLU-RAY DISC
Paramount brings Showtime's "Dexter: The Sixth Season" to Blu-ray in the traditional three-disc configuration (twelve episodes, four to a platter). Perhaps influenced by his concurrent work on "True Blood", DP Romeo Tirone tilts the palette towards the contrasty kind favoured by the latter show, but I personally consider this the best-looking season, the gloss of its ultra-detailed HiDef imagery coming across a tad more filmically than had been the norm thanks to denser blacks and less-pink flesh tones. Colours still occasionally crush and whites still occasionally bloom, but that's likely an artifact of the continued use of the Sony/Panavision HDW-F900; and the compression of this 1.78:1, 1080p presentation is unimpeachable.

The attendant 5.1 Dolby TrueHD audio is sensational: loud, assertive, thumpy yet clear. I don't remember "Dexter" sounding this good before, and for a TV mix, there's a surprising wealth of discrete activity. A BD-Live interface offers streaming access to the first two episodes of the current seasons of "Californication", "House of Lies", and "The Borgias", as well as brief, pointless interviews with "Dexter" cast members David Zayas, Michael C. Hall, Jennifer Carpenter, Lauren Velez, C.S. Lee, Colin Hanks, and Desmond Harrington. No dirt dished on the weird behind-the-scenes drama between Hall and Carpenter, I'm afraid, so save your bandwidth for something else.

That was me, yeah. I was seduced or pacified by the Blu-ray image for a while, and then I liked the cliffhanger a lot. The first half is definitely stronger than the second, though; I didn't get into the dumb twist (which manages to be both transparent and impossible), which marks a point of no return of sorts. Ditto "Nebraska."