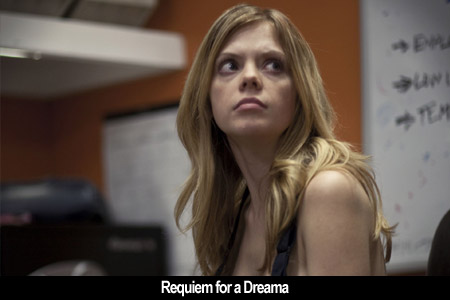 by Walter Chaw Craig Zobel's Compliance comes with a payload of controversy trailing from a notorious Sundance screening where various audience members registered their displeasure in a post-film Q&A--going so far, if reports are to be trusted, as to sexually harass lead actress Dreama Walker in one of the more ironic attempts at defending her honour. I've said it before (and it's only gotten worse), I prefer to watch a movie with a mainstream, middlebrow audience than with any festival audience under any circumstance. Sure, they applaud Michael Bay movies, but at least they don't act like their shit don't stink. Thinking back, there's the example of Sundance's old-lady reaction to Lucky McKee's The Woman, a movie that, upon closer inspection, reveals itself as shocking in neither its execution nor its conception--it's just not that controversial, and its backlash demonstrates the kind of knee-jerk liberalism that venerates easy stuff like Rabbit-Proof Fence. If you declare yourself a feminist outraged by a film that is so clearly also feminist, you identify yourself as a fucking moron and an asshole to boot. Sundance confirms the middlebrow; it celebrates uncomplicated messages wrapped in indie-glamour. When was the last time Sundance pushed something like, say, Valhalla Rising, or Synecdoche, New York? Something difficult, something remarkable, something festivals like it are supposed to champion? Or is the modus for the festival meaningless garbage that congratulates its audience for making easy connections like Beasts of the Southern Wild and anything starring John Hawkes. Fish Tank? Winter's Bone? So Compliance, which would never be mistaken for something transcendent and enduring, is actually more interesting than it first appears not only for a couple of the decisions it makes, but also for the degree to which its audience is pulled into identification with the picture's bland torturers. It's a Milgram Experiment for the viewer.

Becky (Walker) is a slave-wage cashier at a fast-food chicken chain subbing for the McDonald's at which the events depicted in Compliance actually occurred. When her ineffectual manager Sandra (Ann Dowd) gets a call from a man (Pat Healy) identifying himself as a police officer, Becky finds herself strip-searched, cavity-searched, and sexually assaulted at the long-distance instruction of a voice on the phone. I wondered for a moment at the wisdom of casting someone as adorable as Walker in the role of the girl who's objectified--if it indeed wouldn't be more effective if she were ugly. But two things: First, having a sexual fantasy about Walker is obvious and maybe inevitable; and second, the only thing casting an unattractive girl does is force me to admit I wanted to see Walker as naked and humiliated as the sick pervert making the crank call. It casts the viewer in an uncomfortable position, in other words, and it'll probably make the women in the audience furious for all the wrong reasons. If the argument is that Becky should've been ugly so there wasn't so much prurient interest in seeing her raped, well, that's an entire can of worms right there, isn't it? Or is it outrage that the filmmakers would force Walker into a compromising position? Would it have been any less outrageous were she not conventionally attractive? Compliance essentially works--it makes sense within and without context--and the revelation that the picture is fairly faithful to the facts only adds to the idea that the reason it's being received the way it is has everything to do with how credible it all seems, even as we protest in polite company that it's outrageous and isolated.

Not about employee rights, not about intelligence, Compliance is at bottom a film about authority. Sandra acts because she thinks her own manager is complicit; she acts out of respect for the Law, even out of compassion for Becky, who she thinks she's saving from further persecution at the hands of strangers. It's like torture porn with less blood. Everyone feels guilt. Everyone feels the terror of losing their job, lending a lot of sympathy for the devil when the police come calling at his place of work. Everyone is motivated by self-interest and manufacturing clouds of equivocation to forgive that self-interest. Weathering its charge of exploitation, the story of Compliance is complicated in a really gratifying way by its translation into cinema. As soon as it becomes a film, it becomes difficult to dismiss it as just the one-off ignorance of someone we condescend to if we thought of them at all. It becomes an indictment of our weakness and venality--a tiny exploration into the idea that evil isn't grand and mysterious, but just a little bit of the natural state to which we tend, peeking out from behind those layers of civilization.

Can we assume that an audience member at least partially agrees to suspend disbelief by walking into the theatre to see a film?

It seems to me that one of the strongest cultural comments of Compliance is revealed when we realize that the two characters who refused to be compliant had the least to lose. Kevin is young, has his life ahead of him and probably minimal responsibilities, except to himself. Harold, if he isn't homeless, at least has a conventionally unenviable lifestyle. The others have jobs they need and "civilized" ideas of themselves to protect, which may make them more vulnerable to authority.

Do we kowtow to perceived authority in order to minimize the risk of losing what has become important to us? The Compliance characters who become complicit and compliant lose something extremely important (self-respect? strong personal ethics?) perhaps because of their fear of losing what is in fact much less valuable. Sad thing is, some of them (typified by Sandra) may not even realize what they have lost.