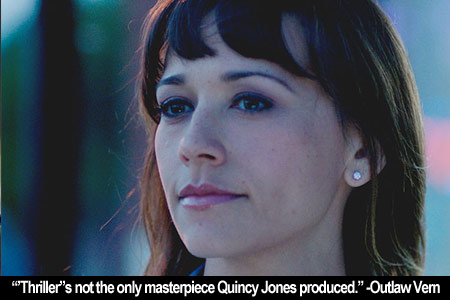 by Angelo Muredda A long-overdue showcase for "Parks and Recreation" star Rashida Jones, Celeste and Jesse Forever never makes it out of the generic romcom woods it wants so badly to escape, and the strain leaves everyone involved looking exhausted. That's especially disappointing, because Jones is a comic talent, burdened by a script--her own, co-written with fellow TV vet Will McCormack--that insists on lifting beyond its weight class to subvert the story it's telling. Bridesmaids seems to be the model here (and not just because the star is her own screenwriter), although director Lee Toland Krieger has little of Paul Feig's ease in modulating tone. You could think of Judd Apatow's protagonists as one man with many faces and varying accessories, and while Apatow is AWOL here, his presence is felt in the way that Jones's Celeste, a professional trend-watcher for a PR startup, suggests a more financially secure version of Kristen Wiig's pastry chef in Bridesmaids. From the start, we get the impression that she's happily married to unemployed graphic designer Jesse (Andy Samberg, in his second marriage-themed movie this summer), with whom she shares an easy rapport too-obviously signalled by their obnoxious habit of making restaurant orders in the voice of Dieter from "Sprockets." It turns out they're separated, though still best friends--at least until romantic complications wedge them farther and farther apart for the remaining 90 minutes or so.

This is a non-standard structure for a comedy, even if Jones and McCormack do more than pay lip service to the genre by wrapping things up at a wedding that conveniently gathers most of the main cast in one space for some boozy confessionals. Starting at what would normally be the end is a gamble promising far more than is delivered by a film that's all too happy to mine clichés as long as it can meaninglessly wink at them afterwards. Emma Roberts, for example, plays Celeste's big client, a sassy young tart who knows she's a sassy young tart, as if that makes her well-rounded. There's also Celeste's Sassy Gay Friend (Elijah Wood), an ironic fountain of wisdom who, as he tells us outright, twice, knows he's fashioning himself into a Sassy Gay Friend. That, of course, makes him a complicated guy.

Those self-conscious reveals, which often feel like the product of novice screenwriters reworking first-draft material instead of just deleting it, don't really belong in something this short. No one suffers for it more than Samberg, who despite being a title character is barely in the movie. First he's sidelined in a mostly offscreen dalliance with a college girl who works at a snack bar. (She's identified in the credits only as Yogurt Girl, so you know what Jones, channelling Tina Fey on her worst slut-shaming day, thinks of her.) Then he's filed away in a romantic B-plot with an exotic artist (Rebecca Dayan) who turns him into the responsible adult Celeste always wanted (she thinks), and throws in a smug vegan makeover for free.

That class shorthand verges on offensive, but it's also where we're on the steadiest ground. Though Jones and McCormack's ambitions to make something formally complex are a bust, their portrait of thirtysomething professionals with disposable incomes is fairly on-point. Krieger, for his part, makes good use of his L.A. locations and nicely delineates the people who move freely within them; Chris Messina, as Celeste's main romantic prospect, is especially convincing as the sort of affable finance dude who can steer you to a good after-hours place, if you're looking. But in a film that bears their names, Jesse and Celeste feel like human waste--a minor plot device married to a stereotype of a career woman, all winking aside.