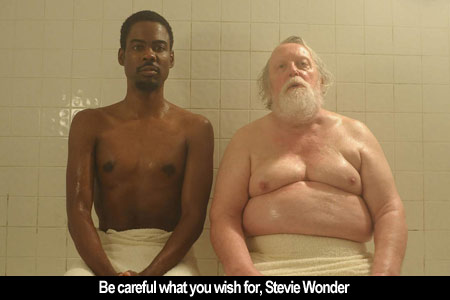 by Angelo Muredda A leaner 2 Days in New York might have worked as a pilot for a Showtime series with a game Julie Delpy at the helm, but as a movie it's a bust, a high-calorie trifle that goes down lumpy. Delpy, who serves as director, co-screenwriter (with onscreen co-stars Alexia Landeau and Alexandre Nahon), and star, envisions the film as a roundabout sequel to 2007's 2 Days in Paris, but the first instalment got much of its low-key charm from Delpy's chemistry with fellow neurotic Adam Goldberg as Jack, an audience surrogate displaced in his girlfriend Marion's anything-goes European milieu. With Jack out of the picture, the follow-up brings Marion's family to the flat she shares with current partner Mingus (Chris Rock) in New York--a proposition that's supposed to be inherently funny, even though Mingus is easygoing and her widowed father Jeannot (real-life Delpy paterfamilias, Albert) isn't all that grotesque. That disjunct gives the film an identity crisis from which it never recovers. What's worse, it just isn't very funny as a concept.

To be sure, Delpy is striving for something formally different from 2 Days in Paris. She trades the tighter dramatic structure of that traveling-couple-under-duress narrative, self-consciously modeled on Godard (her idol in eyewear), for a more traditional French comedy of manners, which is ironic given the American setting. But that choice is bungled by the miscasting of Rock as a neat, Jerry Seinfeld type who politely shuffles through his own apartment while Marion's boorish ex-boyfriend Manu (Nahon), who's come along for the family vacation as the guest of sister Rose (Landeau), struts around in his "Obama Homeboy" shirt, whining that he wasn't born black. Rock is as funny as anyone when he's manic, but banal parts like this--maybe his most thankless since the Weitz brothers' Down to Earth--call on him only to stand slack-jawed before the strange antics of white people.

True to the movie's lax form, the comedy in 2 Days in Paris is diffuse--equally at home with crass mistranslation jokes and sentimental zingers about the difficulties of parenting. (Mingus is the adoptive father to Marion's child with Jack, while Marion is stepmother to Mingus's daughter from his previous marriage.) Short of an inspired POV shot of Mingus imagining his in-laws as a pack of cannibals ready to devour him along with their croissants, few of these tangents go anywhere interesting, though a late development with Marion scrambling to get her soul back (seriously) is a bizarre low. Throughout, we see her preparing for an exhibition of her photography, set to culminate with an auctioning of that prime commodity at a price of $10,000. Vincent Gallo (as himself!) is an inspired choice for the buyer, but it's hard to say what Delpy is going for here after all the domestic gags. Emergency pathos? A last-minute dash of surrealism? Whatever it is, it doesn't wash. Wobbly as the script gets, though, Delpy is unquestionably an original voice worth hearing from, a high-strung intellectual with a bawdy streak and an appreciation for dick jokes that borders on the reverent. She's a gifted comedienne with great dramatic range, and she makes Marion, whose actions are wildly inconsistent, more sympathetic than she ought to be. But she too is ultimately wasted, stranded alongside Rock in a prison of her own making.