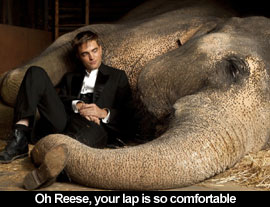 by Ian Pugh Genre hack Francis Lawrence moves into Twilight territory with the trashy forbidden-romance flick Water for Elephants, in which the opposing forces contriving to keep our lovers apart prove to be minor obstacles at best. Despite its circus setting, this is a thoroughly familiar and perfunctorily-told tale. Feel free to blame Lawrence's typically meat-and-potatoes direction. Go ahead and blame screenwriter Richard LaGravenese for an adaptation that, on the surface, leaves no room for complexity or ambiguity. And, sure, blame Robert Pattinson for his infallibly bland delivery. Maybe hold off on blaming Witherspoon, whose charms seem diluted by the woodenness of onscreen beau Pattinson. Just, whatever you do, don't blame poor Christoph Waltz, who brings his "A" game to this sorry affair and is rewarded with one of the most patently ridiculous send-offs ever bestowed upon a character actor. You thought Inglourious Basterds was brutal? Man, you ain't seen nothin' yet.

And to think, this is the life story of some doddering old-timer (Hal Holbrook) come to teach us about true love. Veterinary student Jacob Jankowski (Pattinson) is forced to abandon his studies after his parents are killed in a car accident. It's the Great Depression and a young lad on the road doesn't have many opportunities, but a chance encounter with a passing train leads to Jacob joining the Benzini Brothers Circus as its resident vet. Almost immediately he falls for Marlena (Reese Witherspoon), the wife of domineering head trainer August (Waltz), and between road shows and animal acts she returns his longing glances. Somehow, August's newly-purchased bull elephant becomes the fulcrum for this chaste romance. How does that work, exactly? Don't ask me. (I walked in thinking this would somehow be a romantic adventure based around Thomas Edison's Electrocution of an Elephant, but alas, the movie takes place thirty years too late to accommodate such a possibility.) August's brutality towards and Jacob's compassion for the pachedyrm finally drive Marlena into the latter's waiting arms. Yet there's no guiding force or meaning behind this chain of events--the movie speeds through its plot on overdrive, deaccelerating only to establish August as the villain, Marlena as the little-girl-lost, and Jacob as our plywood hero.

The stated goal of this exercise is to expound on the nature of illusion and artifice, and indeed, Water for Elephants engages in a Depression-era romanticism that self-consciously glosses over a great majority of the relevant hardships. It would be a dandy trick if anything existed beyond the artifice, but every attempt at emotion is a clockwork orange that fails to convince. (The most obvious dramatic device is a kindly old man (Jim Norton) who befriends Jacob, only to be quite literally tossed away once his potential for sympathy has run its course.) "Tragedies" are reduced to speedbumps in a three-act structure, while "passion" is a distant concept to be enjoyed strictly in the academic sense. However forgettable it is, Water for Elephants will serve its purpose eventually, though. Chop out all the detritus and you've got some great fodder for a Christoph Waltz demo reel; taken by themselves, his moments of rage and desperation say more about the conflicts of love and business than anything our two leads have to offer. You did a good job here, Christoph--I'm sorry you had to go out like a punk. Originally published: April 7, 2011.