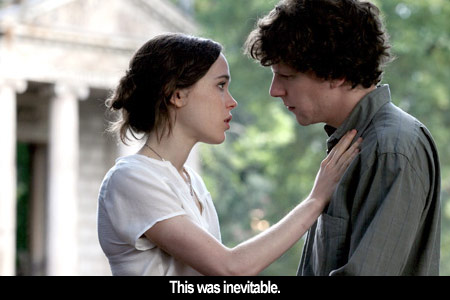 by Angelo Muredda There's an odd moment early in To Rome with Love that makes you sit up and wonder if Woody Allen has made good on the promise shown by his surprisingly warm Midnight in Paris. Stumbling out of a movie theatre with his wife and another couple, regular schmo Leopoldo (Roberto Benigni) mounts a rousing defense of Saverio Costanzo's The Solitude of Prime Numbers, offering that its openness to human mystery makes it far superior to The King's Speech. I can't say I agree with him, but how nice to see such an idiosyncratic opinion voiced in earnest. That's a good sign, coming from a director whose characters often sound like variations on one another in his lesser works--but it's also a false one, when much of what follows plays out like a flat homage to omnibus city movies.

It's hard to know whether the title is meant sincerely. After his usual minimalist Windsor font credits, scored to Domenico Modugno's "Volare," Allen opens with a direct address from a traffic cop (Pierluigi Marchionne) who claims to have insider access to all of Rome. Mighty Aphrodite's affectionate Greek chorus is the obvious point of analogy, and so we expect another heavy, forgiving sigh about human foibles, this time in the eternal city, as per Allen's European funding. Where Mighty Aphrodite had an underlying sweetness, though, this one could well be the product of the misogynistic Michael Rapaport character's unruly imagination in that film. If there's a thread connecting these one-trick stories, it's that women are less than they seem.

Consider the centrepiece, a lopsided love triangle between budding architect Jack (Jesse Eisenberg), his naive college-student girlfriend Sally (Greta Gerwig), and her visiting friend Monica (Ellen Page), a man-eating failed actress. Page relishes being cast against type as a worldly seductress, playing Monica as someone so confident in her pronouncements about art and everything else that she takes for granted her listener's interest. Darius Khondji, back from Midnight in Paris, lights her beautifully, and you wonder why she hasn't been seen as a traditional romantic lead up to now. But there's only so much that Page can do with a character Allen himself seems to be negatively reviewing throughout, via John (Alec Baldwin), Jack's architect idol and older WASP doppelgänger, a vaguely spectral figure who may or may not be the Ghost of Christmas Yet To Come. John's running commentary on Monica's asinine name-dropping of Gaudi and untrustworthiness with men is played less for laughs than as manly wisdom from another dimension. It's as mean-spirited as anything in Match Point, which uses a rifle to go by its character assassination.

You could charitably call this backhanded adoration of women a pattern, but To Rome with Love doesn't warrant or stand up to real psychological scrutiny. Fleeting as they are, there are things to like here just the same. Allen's own subplot (this is his first onscreen appearance since Scoop) about an American opera promoter's discovery that his prospective Italian in-law (real-life tenor Fabio Armiliato) is a talent only when he sings in the shower coasts nicely on its screwball premise and pays off in a funny set-piece that unfortunately goes on well past the punchline. The Penélope Cruz plot, concerning a prostitute who fills in at an important business meeting for a stuffed shirt's provincial wife Milly (Alessandra Mastronardi), a doe-eyed maid wandering through Rome's endless procession of roundabouts and film sets in search of a hair salon, might be even nastier than the Eisenberg-Page twofer. Yet there's something fresh about how Allen scores Milly's tainted misadventures to a looping disco beat--the sound of purgatory. Trouble is, at over 100 minutes, our listless tour through Allen's Rome feels as punishing as Milly's.