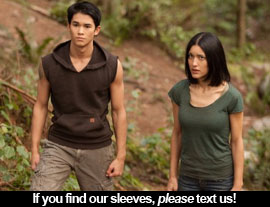 by Walter Chaw Appalling by pretty much every measure, The Twilight Saga: Breaking Dawn - Part 1 (hereafter Twilight 4.1) is the predictable end result of a film based on a book written by an illiterate Mormon housewife mistaking her profound ignorance for profundity. It's about a really old guy who talks a really young girl into marrying him and enduring really, really painful childbirth as her portion of God's judgment on her kind; and then it's about another kind of pedophilia, wherein a 19-year-old badly in need of acting lessons gets turned on by a baby and decides he's going to marry that infant once she's old enough to breed. Still with me? So, yes, I knew it was going to be bad and, yes, I went anyway. And you know what? For as girded as I was to the raw incompetence of this franchise, Twilight 4.1 still managed to plumb a few new depths. See, Twilight 4.1 is an apologia for spousal abuse and a clumsy pro-life screed (what about this crap isn't clumsy?) before turning into cartoon Grand Guignol horseshit meant to freak out an audience of pre-teens and lonely housewives who think that this object of their devotion is selling them anything except loneliness and delusion. It's sledgehammer racist in its depiction of a native housekeeper cast as Maria Ouspenskaya, and it has a moment in which a circle of wolves "think-talk" to each other in some ineffable evocation of an Optimus Prime pep talk. It's completely inexplicable, in other words, and irritating for it.

When the wolves burst out of their clothes at regular intervals, they never fail to reappear completely clad--meaning that while it never made sense that the wolves would morph back with sweat pants, it makes even less sense that they would do so with an entire jogging suit. The best part, though, is when winsome bloodsucker Edward (k.d. lang) performs CPR on his freshly-dead, post-birth wife Bella (Kristen Stewart) in the hopes that he'll...what? Re-person his vampire bride? This time through, all the cockteasing of the first three movies results in violent sex on an island honeymoon excursion as Bella gets her wish and Edward defiles her by, essentially, beating the holy hell out of her. She begs for more. He demurs. Then he's saved by her demon pregnancy, which produces a fetus that eventually crashes through her ribcage and snaps her spine. How romantic. None of it's more atrocious, frankly, than the initial moment of seduction, as Edward takes off his shirt and wades into the ocean: Venus on the half-shell. When Bella walks down the aisle during an endless wedding sequence, she looks like she's being led to the executioner's axe. Meanwhile, a handful of dream sequences and snarky asides do nothing to disguise that there's no structure in this thing and that this will be the longest three days you spend in a theatre this year.

There's so much wrong with Twilight 4.1, it's almost not worth reiterating that Stephenie Meyer, in addition to being tone deaf to how people talk, is absolutely ignorant about every single piece of lore surrounding vampires and werewolves and has accidentally crafted something that's very, very attractive to dirty old men and abusers who have a fantasy of pretty girls begging to get punched because they so desperately want to get nailed. It's fair to argue that the Twilight films are for fans of the books. I'd argue that so are the Harry Potter films. But I'd also argue that the Harry Potter movies aren't socially dangerous little suicide pills delivered to the most vulnerable, naïve, and desperate portions of our society with a payload of ugly ideas, cultural illiteracy, and frankly repugnant views on gender roles. It's the chick version of Michael Bay's filmography; watch it in conjunction with Transformers: Asshole for a pretty clear portrait of everything that's wrong with us--and of how Idiocracy wasn't funny, because it was a documentary. Originally published: November 18, 2011.