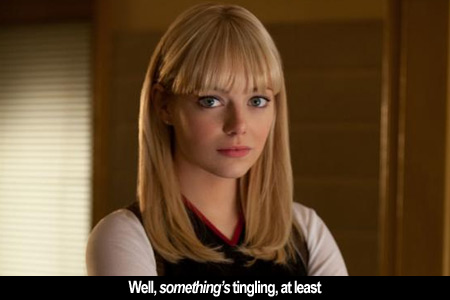 by Walter Chaw SPOILER WARNING IN EFFECT. The only reason for choosing (500) Days of Summer helmer Marc Webb to steer the Spider-Man property in a new direction is the hope that Webb would somehow inject into it a twee, precious, emo-romantic pheromone irresistible to Zooey Deschanel-brand nerd-chicks. Think: Twilight for girls who aren't illiterate. It's not a bad movie in and of itself, but I'm ambivalent about its nominal success, just because rebooting a franchise that's still so fresh (Sam Raimi's Spider-Man 3 was a mere five years ago) proves a terrible distraction. As much as I like Andrew Garfield, the new Peter Parker, I spent a lot of time comparing his performance to Tobey Maguire's in the same role (ditto Emma Stone (the new Gwen Stacey) and Kirsten Dunst (the former Mary Jane)) and wondering what Raimi would have done with a Lizard (Rhys Ifans) voiced/motion-captured by Dylan Baker, had he been allowed to finally pay off that thread. I spent a lot of time, too, distracted by cool emo touches, like having Peter decorate his room with a lovely, vintage Rear Window poster, ostensibly because this Parker is soulful enough a 17-year-old to not only have seen the film but also perhaps modeled his own photography jones after that film's shutterbug protagonist. But what about Rear Window's hero being a voyeur? A scene early on in The Amazing Spider-Man where Parker snaps a surreptitious photo of Gwen hints at a draft of the screenplay that maybe wanted to deal with Parker as a real, honest-to-goodness fucked-up kid. Sad that only moments now and again suggest any kind of depth or greater purpose. Sad, too, that the movie's not otherwise exciting or innovative.

Peter is a sad little kid abandoned by scientist parents (Campbell Scott and Embeth Davidtz) to the care of blue-collar Aunt Mae and Uncle Ben (Sally Field and Martin Sheen), leading to an adolescence of being picked-on and feeling lonesome. Raimi identified Peter as a Freudian hero, acquiring then losing a succession of father figures in the process of emerging at the end as an adult with a full payload of dysfunction and regret. The success of his take on the character had everything to do with the quality of those father figures--Willem Dafoe and Cliff Robertson in the first film, Alfred Molina in the second --and the way that Raimi hinted around at the psychic devastation while providing the goods with a deft, comic book-cum-Three Stooges touch. Even the much-derided Spider-Man 3 has about it an awareness and love for hero iconography that's missing in The Amazing Spider-Man, as well as a certain topicality about it (i.e., enemies made of sand and oil) that placed it in a world not completely dependent, as Webb's film is, on its own source universe for depth and context. Bullied Peter is bitten by a radioactive spider, facilitating revenge on his tormentors in high basketball/Teen Wolf-style (thus implying the first thing white kids will do with superpowers is dunk). Better would have been Peter demonstrating a genuinely scary retributive vigilantism once empowered. If the film were tougher, it would take a look at the elements that make up a school shooter, but it leaves that to Chronicle to address. What happens instead is another playing out of an origin story with which we're all too--and all-too-recently--familiar; a tentative-then-ridiculous romance with the impossible girl; and a climactic battle complete with the rallying of working-class Joes represented somehow by this little dweeb with suddenly mad hops.

Peter's daddy issues are multiplied fourfold here, the magnification of his mounting losses demonstrating Webb's (and Sony's) impatience for a franchise re-starter and so frequent as to feel more like a running gag than like a tragedy. Peter loses his father, his uncle, his mentor, and his girlfriend's dad--the first without any impact whatsoever, the last as a launching pad for an extended epilogue that mainly confirms the film was designed as an excuse for Garfield and Stone to make doe-eyes at each other. When The Lizard appears, it's as an embarrassing CGI construct, though no more embarrassing than Garfield whipping off badly-timed one-liners that run counter to the movie's investment in making everything deadly self-serious. The Amazing Spider-Man's greatest crime, however, is clarifying everything that made Raimi's Spider-Man trilogy exceptional while correcting few of its missteps--replacing that upside-down kiss in the rain, which if nothing else has become a part of our cultural well of images, with an embarrassed smooch on a rooftop that emerges from nowhere and lands without anything like heat. In wanting to craft something that appeals to the Twilight audience, it's succeeded all too well: The Amazing Spider-Man is brooding, overlong, neutered, awkward, solipsistic, and ultimately empty. At least there's that one moment in the sewer where Spidey acts like a spider; if only David Cronenberg had directed this thing.

Jesus this superhero crap is worn out, doesn't anyone else think so? Why reboot a series 5 years old? At least when they're butchering classics enough times passed that the target audience doesn't fathom the superior original they're crapping on anyway. Hollywood has always been pathetic but this smacks of some new level of desperation & corporate soullessness that's embarrassing to behold.

Surely you can crank out better bread & circus than this, you hacks