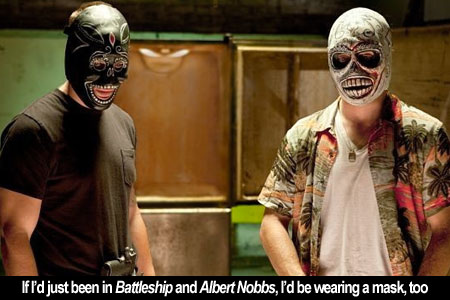 by Walter Chaw Another disgusting piece of crap that Oliver Stone makes watchable and even fitfully interesting, Savages sees Stone returning to ground he already plowed in Salvador, his screenplay for Scarface, and arguably his best film in hindsight, the filthy U-Turn. One possible excuse for its foulness, in an ocean of possible excuses, is a cast headlined by Taylor Kitsch, the new Paul Walker; Aaron Johnson, the new Skeet Ulrich; and Blake Lively, the new...I don't know, Bridget Fonda? Another possible explanation is a godawful script by Don Winslow (author of the novel upon which the film is based), Shane Salerno, and Stone hissownself that opens with a ridiculously bad voiceover tease and ends with same, sandwiching in between a tale of blissed-out California marijuana kingpins Chon (Kitsch) and Ben (Johnson) vs. the Mexican cartel, led by Lado (the always amazing Benicio Del Toro) and Elena (Salma Hayek). Sound awful? It's awful. And it would have been even without an embarrassing John Travolta, wheedling and whinging through an entire performance as a corrupt DEA agent. With him, however, Savages at least has the benefit of occasionally elevating from entirely-useless to sometimes-whimsical camp artifact.

A botanist and an economist, Ben is the brains behind the best weed in the world. His partner in crime is Afghanistan vet Chon, who, according to O (Lively), doesn't have orgasms, but "wargasms." O is the burnt slut with concentration problems who fucks both Ben and Chon in rotation--and sometimes simultaneously--without ever taking off her clothes (her superpower) before being kidnapped by reptilian Lado and held for ransom by Elena's beheading-happy, ripped-from-the-headlines evil Mexican drug lords. They're the savages, see--or is the aforementioned ménage à trois the savages? Isn't it all delightfully complex? But wait: It seems that Elena has a daughter approximately O's age, thus setting up a third act I won't give away to the eleven or so people left in North America who have never seen a movie. As Ben and Chon slowly embrace the savagery their situation forces upon them (with the help of a small band of Chon's ex-grunt buddies), Elena is humanized by...no, she's not. Savages is nothing if not ultimately racist, nihilistic, and, in a sneaky way, classist in its suggestion that white and rich is the only path to true happiness and freedom. I'm not saying it's wrong, mind, just that Stone has been riding this pony for a long, long time.

It's fair to suggest, though, that because the women in this film are presented as a sun-baked bimbo on the one side and a bitch-mother goddess on the other (without any kind of third female voice whatsoever), the greater impact of Savages is that it comes off as carelessly, needlessly misogynistic. It's Fargo with no redemptive women. And although there are no positive male figures, either, the men are allowed to win because of their weaknesses, not in spite of them--Lado because he's vicious, G-man Dennis (Travolta) because he's simpering, Chon because he's an animal, and Ben because he's malleable. Truth be told, none of it really matters, because Savages is ridiculous, from its lame plot to its unsurprising surprises to a tedious climax that massively miscalculates in allowing O to be its author. I'd watch Del Toro read the phone book, of course, but where Salvador had its outrage, Scarface had its debasement, and U-Turn had its pulp, all Savages has is the unholy, dull-witted trinity of Kitsch, Johnson, and Lively looking at this as an opportunity to make a splash with a "name" director instead of recognizing themselves as victims of a slumming Stone, now well into his second decade of free-fall from relevance.

Ya, ya, ya...we all know the movie sucks ass. But racist and mysoginistic? That might be taking it just a little far. I think Walter is letting too much of his miserable outlook on life and political views influence the movie review. Take it easy Walt, relax.