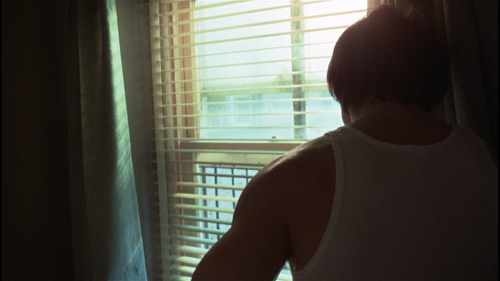 by Bill Chambers I had my suspicion that there is no archetypal Martin Scorsese fan perhaps confirmed for me after doing an oral presentation on him in my "American Cinema" class: A football jock taking the course as an elective sauntered up to me asking to borrow my tape of Mean Streets. He couldn't believe there existed anything like the scene I had just shown--the one where Harvey Keitel's Charlie takes Robert De Niro's Johnny Boy into the back room of their hangout to get to the bottom of Johnny Boy's unpaid dues--despite the strong scent of Abbott & Costello in its staccato rhythm. (For what it's worth, this is also the passage that convinced Warner execs to acquire the film.1) I immediately recognized the look in his eye, the Scorsese itch, and began to long for that first high, as they say; and I probably hope to become a mass enabler in reviewing Scorsese's work. Fitting that Mean Streets should be the catalyst for such nostalgia, marinated as it is in a mnemonic broth that makes the picture more explicitly autobiographical than Who's That Knocking At My Door, with Scorsese going so far as to use his own voice interchangeably with Keitel's when Charlie's narrating the piece (or, more precisely, when Charlie's talking to God).

What's interesting is that while Scorsese scales back Who's That Knocking's film-geek rhetoric for Mean Streets (the characters go to movies and watch them on TV without espousing any particular opinion on them), he prefaces the Super8 sequence beneath the main titles with a non-diegetic insert of a movie projector--a shot that deliberately succeeds a proto-Thelma Schoonmaker mini-montage of Keitel's head hitting the pillow to the first beats of The Ronettes' "Be My Baby." It might be the most ambiguous image in the Scorsese canon, inviting as it does all manner of interpretation, from the film-as-waking-dream reading to a pithy, if complex, apologia for stylizing his memories. The characters even have a West Side Story quality to their names that's only amplified by the theatricality of the film's carnival backdrop, whose obvious purpose--whatever verisimilitude Little Italy's Feast of San Gennaro lends the production--is to expedite the resolutions to the tensions introduced by imposing a timeframe on the episodic narrative. In any case, it single-handedly transforms Mean Streets into a valentine to motion pictures.

That being said, the common misperception of the cinephilic Scorsese is that the only thing he knows is movies, to paraphrase André S. Labarthe's sometimes-contentious profile The Scorsese Machine. What separates Scorsese from, say, the losers populating the documentary Cinemania (none of whom could direct traffic) is akin to the narrow cleft distinguishing catharsis from escapism. In fact, a moviehouse (playing Roger Corman's The Tomb of Ligeia, a tip of the hat to Scorsese's Boxcar Bertha producer) offers our heroes pointedly fleeting shelter from debt collectors at the climax of Mean Streets, as if to caution us against using film to hide from the world; when Keitel's Charlie leaves the theatre to call his girlfriend, Teresa (Amy Robinson, who manages to both overcome a late entrance and penetrate the boy's-club atmosphere), he's none-too-subtly standing next to a poster for Point Blank.

The first--but not the best--manifestation of the Scorsese-De Niro alchemy (De Niro seems more inspired in the Brian DePalma political satires that came before this), Mean Streets opens with mobster's nephew Charlie--who gets an entrance to The Rolling Stones' "Tell Me"--swearing off confession ("I mean if I do somethin' wrong, I just want to pay for it my way") and giving the benefit of the doubt for the nth time to Teresa's trouble-bound cousin, Johnny Boy--who gets an especially iconic entrance to the Stones' "Jumpin' Jack Flash."2 Teresa is epileptic and Johnny Boy is volatile: in other words, they're both wired to explode, and it's not irrelevant that a recurring image finds Charlie holding his finger above a flame, seeing how long it takes before he gets burned. Charlie doesn't feel comfortable going to his uncle Giovanni (Cesare Danova)--after whom Johnny Boy was christened--for assistance with Johnny Boy's dues or Teresa's plans to leave home, not only because Johnny Boy and Teresa are the black sheep of the family (Giovanni considers them more or less equally "sick in the head"), but also because he's angling to inherit Giovanni's controlling interest in a floundering restaurant and dreads the thought of squandering goodwill on potentially transient residents of his life.

Charlie is the quintessential Scorsese protagonist whose doormat tendencies finally force fate's hand; pretty brave, ironically, for Scorsese to openly identify with a coward to the extent that he's speaking for him in voiceover. "For me that was a way of trying to come to terms with myself, to redeem myself," Scorsese is quoted as saying in Scorsese on Scorsese, though one imagines that Charlie's constant fretting would read differently with Scorsese himself--asthmatic, skittish, vertically-challenged--in the role instead of the feral Keitel. Scorsese's oblique comments in Mary Pat Kelly's Martin Scorsese: A Journey, meanwhile, suggest the film goes beyond preserving his youth in amber to allegorize his being replaced as the director of The Honeymoon Killers: "You put [things] off and you put [things] off until finally...they fire you or you walk off and it's a disaster."

Save for a nude scene he deemed gratuitous (one that is sexy, earthy, and ultimately atypical of Scorsese), Mean Streets pleased mentor John Cassavetes to no end--his affection for it giving the lie to the notion that the documentary pretense of Cassavetes's own work reflected an animosity towards flashier filmmaking. (Granted, the picture is littered with vérité inserts of the Feast of San Gennaro and New York nightlife.) But while Cassavetes was in fact an advocate of personal cinema and may have seen Mean Streets, with its flawed humanity and culturally-specific trappings, as a movie of primarily sociological and anthropological merit (many critics at the time saw it as an urban antidote to The Godfather), its technique is not to be underestimated. Perfected here are Scorsese's patented slow-motion cutaways, combination pan/tracking shots, ingenious use of pop music, and impromptu bloodbaths, all of which merge to produce what Pauline Kael called in her Mean Streets rave "Expressionism without the use of distortion"--still the most compendious description of Scorsese's aesthetic I've ever encountered.

THE BLU-RAY DISC
Warner brings Mean Streets to Blu-ray in a 1.78:1, 1080p transfer that improves on the Special Edition DVD in some critical ways--the infernal reds of Tony's darkroom-esque bar, for instance, are even more stable and supple, less prone to blotting out subtle gestures--but looks a little too denoised for my taste. HD reveals dozens if not hundreds of focusing inconsistencies, and more of that God-given low-budget grain would help make them palatable to the viewer. Colours are coolly naturalistic compared to the '05 DVD, and I don't quite know what to make of this, except to say that the lack of an orange filter results in a palette closer in spirit to the '70s of the mind. The centre-channel audio is much improved by the DTS-HD MA encode: gone is the Vitaphone-quality dialogue (though it's still a little harsh/brittle), while the mix itself remains a thing of ingenuity. For what it's worth, the many songs sound surprisingly rich in this incarnation; kudos to Warner for licensing every last expensive soundtrack cue once Mean Streets hit video and a whole bunch of pissed-off record execs suddenly came out of the woodwork. (Boo to the studio, however, for replacing their vintage logo in front of the film with the current CG one.)

One of the joys of this disc is listening to Scorsese recapitulate an epiphany near the end of the film's non-screen-specific partial commentary (82 mins.), during which he is periodically interrupted by the individually-recorded Robinson, now a producer. A perennial explorer of his mental landscape, the then-62-year-old auteur offers that Mean Streets is perhaps more reflective of the many feuds his father's side of the family nurtured over the years than it is of his own turbulent past; for a track that begins with Scorsese warning us that Mean Streets is a difficult subject for him, there's a surplus of high-calibre introspection on display--some of which, such as his feelings on constructive vs. destructive criticism, were new to this devoted fan. For her part, Robinson initially threatens to touch on tantalizing sounding stories from the set of DePalma's Sisters but soon changes gears, and though she offers a uniquely distaff perspective on the production of Mean Streets, the unfulfilled curiosity she piques at the outset casts a pall over her contribution. Scorsese and two childhood chums (Sally Gaga, the basis for Johnny Boy, is not one of them) take to the Lower East Side like dork Reservoir Dogs in Elliot Geisinger's vintage featurette "Back on the Block" (7 mins., SD), which rounds out the platter along with Mean Streets' mafia-centric theatrical trailer (SD).

1. Which was only appropriate, given that Scorsese considered Mean Streets to be in the tradition of the gangster dramas that defined Warners in the '30s, with The Public Enemy's use of contemporary music serving as a key inspiration. return

2. The point I'm trying to make, I guess, is that there are no Beatlles men in Scorsese movies, merely different varieties of Rolling Stones men. return