Our long-overdue review of Margaret (2011) 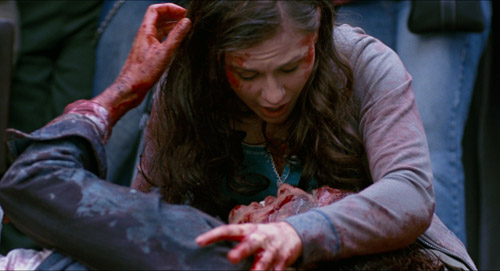 by Angelo Muredda The early word on Margaret was that it was a promising three-hour-plus city symphony wrested away in the editing room from writer-director Kenneth Lonergan. Still mired in legal troubles from the production over the course of its quiet release and critical resurgence last fall, Lonergan briefly spoke up to deny that what a coterie of critics and audience members had seen up to that point was damaged goods, admitting the 150-minute theatrical version is more or less his Director's Cut. While the Blu-ray release includes the famed longer version*, then, it bears mentioning that if the theatrical cut is a thwarted masterpiece, uneven but conceptually daring and powerful, it's very much Lonergan's thwarted masterpiece.

Margaret isn't the sort of film you'd expect to see championed on Twitter via the team-based hashtags usually reserved for vampire-versus-werewolf romances, though that was its ultimate fate. It's an ambivalent slice of upper-middle-class life audaciously linking New Yorkers' stages of grief after 9/11 to a teenager's transformative encounter with a random disaster. This allegorical component might have been in poor taste, but Lonergan doesn't have anything too glib in mind: This isn't strictly a grand statement about what it means to mourn the strangers one passes on the street. I say "strictly" on account of the title, a reference to Gerard Manley Hopkins's poem "Spring and Fall," about the titular young girl who, as her heart grows older, comes "to such sights colder." Margaret is an analogue for Lisa (Anna Paquin), a private-school senior and the primary witness to a bus accident that kills pedestrian Monica (Allison Janney), who with her dying breath mentions a daughter by the same name as our protagonist. But Lisa, a hyper-articulate, self-absorbed tragedy-hound (of course she runs with the possibility that she's Monica's Elseworlds daughter), doesn't fit the mold of the autumnal young woman who mourns for her faded spring bloom. Nor would you want her to: Margaret's uncommon richness lies in the way its characters spill out of their archetypes, erupting into their own baffling, sometimes irritating, idiosyncrasies.

As a playwright, Lonergan is known for his caustic, generation-tapping dialogue, but what surprises most in his second feature is his strong visual sense. DP Ryszard Lenczewski translates the script's thematic tussle between the individual and the city by effectively drowning Lisa in her surroundings via grainy 35mm crowd shots. She's often framed from a fixed distance as she makes a beeline through a packed sidewalk, disappearing as people who ostensibly have their own compelling stories replace her. A little of this motif goes a long way, granted, and towards the end Lenczewski's nighttime views of NYC inch uncomfortably close to the bathos of Tommy Wiseau, who similarly throws to the skyline (San Francisco's, in his case) in The Room whenever he wishes to juxtapose tragic man with the heavens. The key difference, beyond technical competence, is that there's real curiosity here, on Lisa's part as well as the film's, about whether it matters that her personal crisis doesn't rate in the scheme of things.

In the way it keeps its eye trained on its ideas, Margaret is the work of a dramaturge thrilled by the expansive nature of his adoptive medium. The cards are laid out in an early scene where Lisa's geometry teacher (Matt Damon) openly wonders if she's ever found herself in an unfamiliar situation that's taught her new skills. She's quick to answer no--a sure signal that she's about to be tested, not just in the politics classes where she casually tosses off anti-Islamic rhetoric, but also in her more mundane dealings with the people around her. It's to the terrific ensemble's credit that those tests feel as organic as they do. Lisa's social circle starts with her stage-actress mother (an excellent J. Smith-Cameron, Lonergan's wife) and expands to slacker lothario Paul (Kieran Culkin), doddering English teacher John (Matthew Broderick), the bus driver (Mark Ruffalo), and eventually Monica's best friend Emily (Jeannie Berlin), with whom Lisa spearheads a lawsuit as frivolous as the one in The Sweet Hereafter.

Paquin is fearless here, nailing the ambiguity of someone both open to those around her and unashamed about sculpting them into her own dramatic arc. (Watch her morbid excitement when she learns a new detail about Monica's daughter--something to fold into her cosmic schema.) Berlin is especially strong opposite Paquin. The pragmatic Emily's assessment of Monica as "the most fully developed person" she knew hangs over her tentative friendship with Lisa, a new person with each new audience, like a bad omen. Yet Lonergan, who seems eager to reveal Lisa's character through incidental brushes against the supporting cast, doesn't share Emily's resistance to her unsettledness.

If Margaret's appetite for non-sequiturs is what makes it so compelling, it's probably also what made so many assume the film was assembled by committee. Although its unevenness is surely by design, its diversions aren't created equally. Jean Reno's Columbian opera dilettante feels borrowed from a multi-ethnic stage play about the Big Apple; his anti-Semitic reveal is a cynical exclamation point at the end of Lisa's quest through the city. And Ruffalo's bus driver registers largely as a museum exhibit: working-class man displayed in his natural habitat. Even these problems, though, are the result of ambition as opposed to laziness. Margaret is guilty of overreaching, sure, but it's a better movie for it--a singular work that can earnestly cite King Lear only to show the man quoting it nervously inhale the contents of a juicebox moments later. It's as strange and as unwieldy as the city it loves. 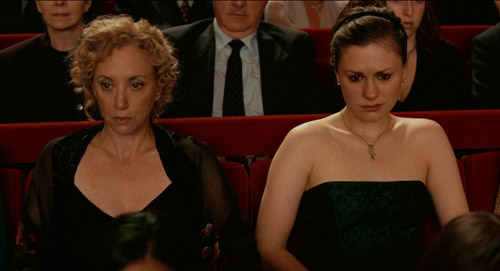 Margaret is now available on Blu-ray exclusively at Amazon.com

*On a bonus DVD, alas. We have yet to view this extended cut.