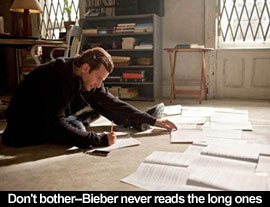 by Ian Pugh SPOILER WARNING IN EFFECT. Its plot follows a drably straight line and its Joe Gillis narration is tiresome; the most original idea that Limitless has is that, hey, maybe drug abuse isn't such a bad thing after all. That snarky notion extends past the actual narrative into the presentation itself. Whether that's enough to sustain your interest is, ultimately, up to you. Eddie (Bradley Cooper) is a down-and-out novelist when his ex-brother-in-law Vernon (Johnny Whitworth) introduces him to NZT, a miracle pill that increases his creative and intellectual prowess to the nth degree. With a wealth of suppressed knowledge suddenly at his disposal, Eddie is overcome with, yes, limitless ambition: he completes his long-stalled novel in four days and goes on to learn new skills, talents, and languages in the blink of an eye. As the drug's power only increases with time and dosage and won't let him stand still, he applies his newfound intelligence to the stock market (leading to an encounter with a corporate big shot (one of Robert De Niro's trademark extended cameos)) and plans to further increase his wealth with money borrowed from the mob (leading to an encounter with a lowlife thug (Andrew Howard)). Then come the unexpected side effects--such as the random murders and hired goons who seem to follow him everywhere. If Limitless isn't about the horrors of drug addiction, then what is it about? How the attempt to "enhance" one's own identity removes that identity completely, perhaps? Maybe the overconfidence that attends brilliance? No on both counts, but it's a wild ride while it lasts. And that, in itself, is sort of the point.

What the picture lacks in a clear thesis it makes up for with its psychotropic appearance. Eddie's pre-NZT existence is shot through a depressing blue filter, while his enhanced state is given a blinding amber glaze and fish-eye distortion; from the moment you're conscious of that distinction, the movie forces you to choose which life you'd rather lead. Caught between sensual overload and intellectual wish-fulfillment, Limitless, in chronicling its subject's meteoric rise, engages the viewer in a head-trip--and it's one so powerful, so overwhelming, that the film literally becomes a drug. The first time it performed an infinite zoom straight out of Yellow Submarine, it triggered a headache for me. The second time around, the parameters had been established, my heart was pounding, my pupils were dilated, and I accepted it with open arms. And, as with De Palma's Scarface, the highs prevail despite the character's downfall. Limitless has comparativly little stomach for the corresponding lows, however. Sure, the addiction factor crops up every now and again: Eddie suffers bouts of memory loss, and his dependence on the pill eventually leaves him unable to function (or survive) without it. Yet the blackouts are easily solved by those old adages "don't take too many" and "don't mix booze with pills." By the time Eddie has taken enough NZT to wield some tangible power, he has kicked the habit and kept all the benefits.

But even throughout its ridiculously happy ending, Limitless never quite drops that amber sheen, welcoming the possibility that the entire narrative is some kind of complex hallucination. Presenting itself as an opiate to be passively absorbed while it talks about people who can accomplish the impossible, the film is certainly aware of its central irony--it just doesn't take it to the next level. Once we've finally collected our senses and peeled back its visual fireworks, what's left is a reasonably diverting misadventure without much to say about humanity's lust for/obsession with greatness. That's precisely where its reluctance to tackle consequences becomes a problem. There's a moment near the end where Eddie desperately laps blood from the floor to collect the sweet, sweet NZT contained therein, and what should be a grand metaphor ends up as one more silly mishap in a comedy of errors. Limitless sees itself as a meaningless fiction--at worst, a bad acid trip. So why shouldn't we take it at face value? Originally published: March 23, 2011.