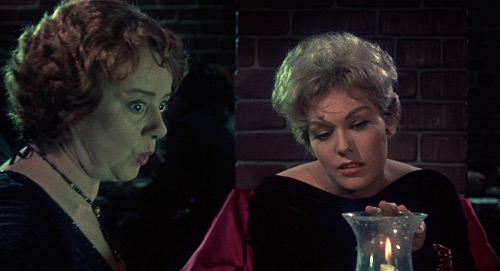 by Jefferson Robbins What a strange companion piece this makes for Vertigo, released the same year by Paramount. Columbia issued Bell, Book, and Candle as a Christmas confection, but it's bitter chocolate--both for the extratextual residues carried over by Vertigo co-stars James Stewart and Kim Novak and for the conceit of a powerful woman who must rein herself in to become worthy of a clueless paramour. In each, Stewart is a bewitched man who throws away much of his dignity in pursuit of a sexual obsession and torments a beautiful apparition of a woman to tears. Re-examined now, despite its technical proficiency, its occasionally risqué dialogue, and its mindfulness of New York's post-Beat subculture of the time, Bell, Book, and Candle is also a fantasy of limited vision. It posits a world of real magic but never contemplates the ramifications beyond its heroes' immediate personal needs. This shortsightedness, unfortunately, is now engraved on the thirteenth chromosome of all romantic comedies; the exceptions that dare glance up at the wider world are mutations. Still, Bell, Book, and Candle carries off some covert gender reversals most contemporary comedies couldn't muster, and it echoes in the "Harry Potter" franchise of novels and films in ways that make me think J.K. Rowling was a fan.

Gillian Holroyd (Novak) is the most glamorous Manhattanite imaginable--a bohemian gallery owner specializing in "primitive" occult art from Africa and South America. (Plus, she looks like Kim Novak.) Yet she despairs of ever becoming involved with "someone different." Rear Window-style, she spies on the comings and goings of upstairs neighbour Shepherd "Shep" Henderson (Stewart) through the building foyer, and one Christmas Eve, her thoughts stray to whether she could snare such a man without the use of her "tricks"--powerful magic hexes conducted through the intermediary of her Siamese cat, Pyewacket. Gillian's not only a witch, but also part of a family of witches, including her eccentric Aunt Queenie (Elsa Lanchester) and devilish slacker brother Nicky (Jack Lemmon), who in turn are part of a whole society of witches (and warlocks) that convenes for recreation in a Greenwich Village retreat called--paging Doctor Strange!--the Zodiac Club. She's doing okay with her pledge, using all her (formidable) wiles to lure Shep, but the discovery that her target is pledged to an old Wellesley College rival, Merle (Janice Rule), is the broomstraw that snaps the witch's back.

There's magic indeed in director Richard Quine's handling of this material, as well as in the deftness of his cast. Novak rivets our attention early on, of course, with Gillian's sultry murmur and crafted eyebrows, and Quine loves shooting her barefoot and/or in backless ensembles. But any movie that has Stewart stumbling upon a wonderfully dotty Lanchester putting a jinx on his phone; any movie that has Ernie Kovacs bumping into strangeness as a rumpled occult researcher deep in his cups; any movie that has Lemmon snuffing out streetlights in a little midnight dance--now plainly a predecessor to Dumbledore's initial bow in Harry Potter and the Sorcerer's Stone--has a lot more to recommend it. Cinematographer James Wong Howe's camera makes silky dolly movements, nosing cleanly around interiors and elegantly framing layers of action, even leaping into Pyewacket's point-of-view. It makes loving choices, too, as when in the first flush of enchantment Shep throws his hat off the roof of the Flatiron Building and the camera follows it all the way to the street.1 Gillian's and Nicky's spells are announced by a simple, theatrical green lighting effect that is nonetheless lovely and otherworldly. Quine likes a good dumbshow, often filming his players from a distance in conversations without dialogue, and his male cast members show their strength here. Kovacs made a career out of manipulating the camera from in front of it, and his loose, casual Redlitch careens agreeably off his co-stars. You forget that Stewart was a skilled dancer until he does a smooth pivot around Shep's apartment, or takes a hamstring-threatening pratfall off a ladder--at age fifty.2 Note also the expressive, operatic use Lemmon makes of his hands: Nicky is a trickster egotist, a bongo-playing Mephistopheles out of "Faust," especially as he wordlessly orders Redlitch into an enchanted cellar.

Gillian's motives for hexing Shep are deeply impure, and as he later notes, she acts out of spite as much as desire. Witches, in the movie's formulation, cannot truly love or experience many of love's physical responses (blushing or tears), so Gillian's sorcery is at first a base power play. She carries on with Shep explicitly without being in love, and that's pretty bold for 1958. She's a sexually forthright woman with the heart-denying qualities of too many men, in other words--someone who elicits love without loving in return, because feelings are complicated and they hurt and we're better off without them, right, bro? When she takes that unmanly step of acknowledging love, her power flees, making her a darker variation on the virgin whose power is rooted in chastity. In its mid-century way, the film is grappling with feminism--with the presumptive cost to a woman of gaining independence and, ultimately, power over others. By taking magical control of one's life, Gillian laments, "We forfeit everything and we end up in a little world of separateness from everyone."3

Though no one else in her witches' circle sees anything particularly wrong with this, it's an imbalance in her relations with Shep, whose attempt to reconcile with Merle yields one of the picture's cleverest shots (Stewart peering at Rule over the corner of an easelled canvas) and one of the best throwaway retorts in any studio-era battle-of-the-sexes comedy (no spoilers). The treatment of Merle is one of only two complaints I can lodge about Bell, Book, and Candle, and it may have more to do with the romcoms that have followed it than the with the picture itself. Here we see the rough disposal of a largely blameless character, simply because she enters the action already linked to the romantic lead. Bad enough when a film grafts some lame transgression onto a character to excuse his or her dismissal, but Merle is a perfectly legitimate (and seemingly coequal) partner for Shep who's thrown over for not being Kim Novak, and for some long-ago college cattiness. Props to Bell, Book, and Candle for nudging at the ways women can casually, cruelly jockey for power, but this plot mechanism is precedent for the horrid ejection of John Corbett and Bridget Moynahan from Serendipity, to name just one slice of cinematic hell.4

Through its B-plot, the film also coaxes us to ask more questions about its urban fantasy setting than are probably healthy. Nicky signs on to co-author Redlitch's book about witchcraft in Manhattan, an act that risks exposing the family's entire subculture--though the only issue seems to be whether it will muck up Gillian's relationship with Shep. Is senior witch Bianca de Passe (Hermione Gingold...get it? Hermione?) okay with the gambit? Do the witches see themselves as equal to regular humans, or superior? Do they even understand mundane life, or are they as baffled as J.K. Rowling's wizards at the concept of, say, dentistry? It's a kind of worldbuilding that Bell, Book, and Candle isn't concerned with, but I am.5

THE BLU-RAY DISC
Fledgling label Twilight Time, specializing in limited-edition Blu-ray pressings of classic but OOP titles, discloses Bell, Book, and Candle in a 1.85:1, 1080p transfer that twinkles with grain. That's a compliment, really, since it means you feel like you're watching a film. The grain is almost violent over the opening Columbia logo, which made me fearful at the start, but the effect subsides to become near-unnoticed in darker scenes, such as Philippe Clay's sinuous musical number at the Zodiac. The blues and browns in Gillian's gallery and den are properly saturated, and as she transforms herself and her business, the set blooms with a brighter palette. A green-flame optical effect when Gillian's coven casts a spell, rather than being shown up as false, feels completely organic and in-camera. And Gillian's sleek black pantsuits are jet black. In sum, the presentation gives Bell, Book, and Candle a vitality it deserves. The audio, billed as 5.1 on the packaging, is actually a DTS-HD MA 1.0 track whose fidelity is good enough to pass for multi-channel. Although there's not much bass, George Duning's score almost seems to rise from the rear, as does the toll of a bell when Nicky withdraws a spell he's cast. Here again, the Zodiac Club scenes benefit the most, highlighting the jazz numbers by Pete and Conte Candoli as The Candoli Brothers. The score can be experienced in a much-welcome DTS 2.0 isolated music track. If there's any flaw in the lossless mix, it's that Novak's vocal purr--especially in her early scenes--is clearly outed as post-production looping.

Supplementing the BD are two brief, audio-only (DTS 2.0) interviews with Novak--chats with Stephen Rebello laid over footage and stills from the productions she discusses. "Bewitched, Bothered and Beautiful" (9 min., SD) has Novak talking Bell, Book, and Candle.6 She says that Stewart told her during filming he probably wouldn't take on too many more romantic leads, acknowledging his age. (To the credit of all involved, the twenty-five years Stewart has on Novak never stood out to me in either this or Vertigo.) Between their two movies, the stars established a casually intimate relationship that put both at ease while simultaneously, according to Novak, causing some consternation for director-lover Quine, who'd helped launch her career. The second featurette, "Reflections in the Middle of the Night" (15 mins., SD), takes on Middle of the Night, Novak's well-regarded 1959 starrer helmed by Delbert Mann and scripted by Paddy Chayefsky, about a controversial May-December love affair. Of course Harry Cohn, then Novak's thuggish boss at Columbia, didn't want her to do it. Bell, Book, and Candle's original theatrical trailer (3 mins., HD) rounds out the platter.

1. This is unfortunately preceded by a really jerky 360-degree pan from the same roof. One trusts the guy responsible for the former shot isn't the same one who filmed the latter. return

2. Nobody notes this in the disc's extras, but Stewart's longtime stunt double Ted Mapes shows up late and unbilled as one of Gillian's gallery customers. return

3. There's also discussion of magic being "habit-forming," with Gillian's attempt to go cold turkey discouraged by her fellow addicts. return

5. I'm also concerned about Pyewacket, who, in these pre-"no animals were harmed" days, gets smacked with a broom, shoved in a wastebasket, and chased into the winter street. I'd split for Elsa Lanchester's apartment, too. return

6. It's titled on the box cover and in the disc menu as "Bewitched, Bothered and Blonde," a second labelling slip-up indicating that Twilight Time, for all its phenomenal intentions, could use a little back-end quality control. return