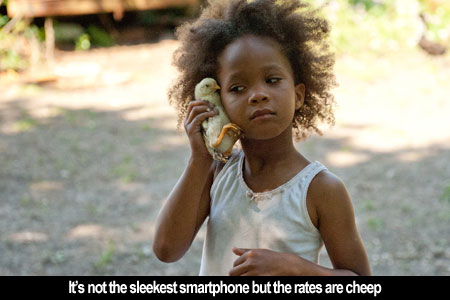 by Angelo Muredda The trailer for Beasts of the Southern Wild promises a harmless experience, but woe to anyone who goes in expecting a triumphal horn concert only to find Benh Zeitlin's accomplished yet exasperating debut, a libertarian wolf in a fuzzy Aurochs suit. That the film is far trickier than its marketing hook suggests is at once refreshing and troubling, given what it actually has up its sleeve. An oyster banquet pitched on a burial site, it's the sort of ethnographic celebration of a disenfranchised people that ends with the unspoken maxim, "And then they all died like men, and faded into legend."

Again, that's not a quote, but it might well have been: Zeitlin's great trick, oft-repeated, is to put his ideological bromides in the mouth of 6-year-old cutie-pie Hushpuppy, beautifully played by newcomer Quvenzhané Wallis. Wallis is undoubtedly strong as a motherless young girl who, in the film's wispy narrative, weathers an apocalyptic storm with her gruff father Wink (Dwight Henry) in a lowland area they call the Bathtub. Yet her precociousness is also a handy device for making old standbys about the fortitude of the underprivileged and the magic of the Louisiana bayou seem rather less specious than they are, insofar as they're directed towards a disaster-stricken fishing community that can no longer reliably turn up fish. Expect many of the same people who scoffed at mealy-mouthed voiceovers like "Mother, brother: it was they that brought me to your door" in The Tree of Life to be more welcoming on account of her age to Hushpuppy's metaphysical noodlings. Although some of these have a sweet, mythopoetic quality to them ("I see that I'm a little piece of a big, big universe"), others, like "Everybody loses the thing that made them. The brave men stay and watch it happen. They don't run" ought to raise our eyebrows, given the fatalistic perspective the film consistently advances.

In Hushpuppy's worldview, to not run is to dig one's heels into the soil in the face of upheaval, and that's fair: This is a girl who's lost her mother and, to some extent, her home. In Zeitlin's worldview, though, it's to manfully face certain destruction from the whims of natural disasters, and to refuse government aid at all costs. If Hushpuppy's stoicism is plausible enough, Zeitlin nevertheless shows his heavy hand in the way he potrays her as a savant, a Huck Finn type whose fresh perspective allows her to see things more clearly than others do. When the dust settles, Beasts of the Southern Wild might go down as the definitive anti-Obamacare movie, as well as a belated rejoinder to Kanye West's proclamation that "George Bush doesn't care about black people." The charge that's casually levelled here is that he may have cared too much: Free of antagonists for most of its first two thirds, things firm up when a group of FEMA-esque white folk swarm on the survivors, hauling them off against their protestations to be processed in a nondescript, whitewashed shelter. Though Zeitlin, the child of two folklorists who obviously has a sense of the family business, starts off making his own cultural myth about a girl who fancies herself a legend (pursued by those mythical Aurochs), at this point he reaches for a political allegory.

The result could generously be called inconsistent, and given the stakes of what's being represented, that's not good enough. What are we to make, for instance, of this vague evocation of the Superdome, where as many as 20,000 people were shuttled during Katrina? Through Hushpuppy and her Medicare-averse father's perspective, Zeitlin presents the refuge as a zombie-making facility in which perfectly able people are infantilized and plugged into walls, forced to rely on sophisticated machinery when the strength of their own bodies, raised to crack a crab's spine in one shot, ought to do. Putting aside the political implications of that allegory (as indeed the film does almost immediately)--the notion that communal self-reliance and personal fortitude trumps institutionalized support after a disaster--we're still left with this rather eerie prescriptivism about the body. Hushpuppy's suggestion that to rely on prosthetic devices like feeding tubes is to be Unnatural Man isn't just a child's magical thinking: it's a homespun truism from an auteur who seems unduly anxious about the twinned possibilities of illness and disability, deferring to the beautiful simplicity of the idea that a good death is a clean one, untouched by cancer or by the artificial life preservers of modern medicine. If only.

But maybe we shouldn't be so charitable as to put aside the political reading Hushpuppy's view would seem to go hand-in-hand with: the notion that this hard-partying utopian community ought to be left to float on its own, as the unevacuated residents of New Orleans ought to have survived on their natural reserves of good whisky and true grit. Zeitlin doesn't push too far in this direction, whether to his credit or owing to his embarrassment about the implications, but either way, his sustained funeral dirge for the Bathtub isn't as compelling as the stunning opening sequence, a jamboree that closes with an image smartly blazoned all over the ads, of Hushpuppy racing through tall grass with a pair of sparklers. Zeitlin's commercial inclinations suggest a young David Fincher, his narrative careening between a number of discrete, ingeniously designed set-pieces, including a lovely, dreamy interlude in a brothel where Hushpuppy sashays with a woman who's either her mother or the idea of her. There's obviously great talent at work here, but what it's in service of isn't clear. As both ethnography and allegory, the film is hampered by its chronic vagueness, its habit of distancing its incoherent politics behind its protagonist's naiveté. (Consider the throwaway line from Hushpuppy's teacher about protecting those smaller than us, when systematic methods for doing so are frowned upon later in the film.) Conversely, as either a mythical or a purely visceral experience, Beasts of the Southern Wild is held back by its quasi-documentary presentation, its insistence on signposting the swampy aftermath of Katrina--whether it has something to say about it or not.

Like Memoirs of a Geisha, book and film alike, Beasts of the Southern Wild is destined to be a lightning rod for debates about cultural appropriation, though I'm inclined to cut Queens-born Zeitlin a break on that front--and not just because his filmmaking collective is based in New Orleans. Though his use of shaky handheld footage filmed from Hushpuppy's perspective a few feet above ground is certainly a claim to authenticity, that's as much an aesthetic as it is an ideological choice, and it's sufficiently striking to be worth the gambit. Zeitlin is no more guilty of feigning documentary realism than, say, Alfonso Cuarón is in his single-take tour through blasted out buildings towards the end of Children of Men, and I see no reason to chastise him more for it because his characters are African-Americans and he is white. The problem isn't so much who's behind the project but what's on screen. Indeed, what ought to occasion serious post-film discussion is the nature of the argument. And it is an argument: While Zeitlin is sure to receive a warm welcome from AMPAS, a liberal stronghold that skews conservative with films about race, my hope is that people take his debut as seriously for what it's saying about healthcare, poverty, and individualism as for what it looks like--a gloriously dilapidated travel ad.