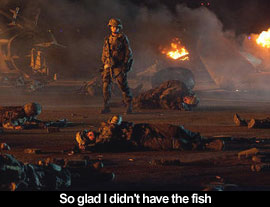 by Ian Pugh The action sequences in Battle: Los Angeles operate on a clockwork schedule. A group of Marines traverses the title city in search of civilians and/or shelter. Suddenly, aliens! The camera shakes for five minutes. The Marines find a safehouse and plan their next move. Suddenly, aliens! Lather, rinse, repeat. But, you will ask, what happened while the camera was shaking? How did they escape? And, as one character inevitably puts it, "What is that thing?" Fair questions, all. I'm pretty sure I caught a glimpse of a rocket launcher built like that BigDog robot, though I can't be 100% certain. There's actually a specific moment where you give up trying to distinguish one thing from another. At the beginning of this adventure, we're told that the Marines have a mere three hours to recover their civilians before the military blows up Santa Monica. Time finally runs out with some folks holed up in a random liquor store, and your first impulse is to question why the movie would leave its final countdown to an analog clock on the wall--but then you realize that you have no idea who these people are, how they got there, who died in the interim, or whether this is a liquor store at all. (Maybe it's somebody's wine cellar? I think I saw wine bottles.) It's not an interpretation of wartime chaos, it's just plain incomprehensible.

The kicker is that I was really looking forward to Battle: Los Angeles. Remembering director Jonathan Liebesman's astounding work on The Texas Chainsaw Massacre: The Beginning, I held out hope that his latest would expound on the wartime nihilism that seemed to pique his interest. I'd love to know what went wrong--to know at what point this became a gung-ho propaganda piece without a specific target. Whatever happened, the end product can only be described as Red Dawn for the undiscriminating conspiracy theorist: The barely-visible humanoid aliens stand in for the Commies, Islamists, Big Government, or whatever monolithic threat that's currently terrifying you, a small band of ultra-patriotic can-do jarheads all that stands in their way. And in the face of alien autopsies and bald-faced rip-offs of Aliens, Battle: Los Angeles takes itself far too seriously--as if this were the first film to contemplate the grand-scale destruction of L.A.. In fact, stick this on a double bill with The Adjustment Bureau and spend the whole night wondering whether you're watching some impossibly-subtle satire.

A lot happens in the way of bullets and bang-bang, yet very little is accomplished. At least Liebesman was smart enough to bring Aaron Eckhart aboard. Given absolutely nothing to work with, Eckhart delivers another intense, scenes-salvaging performance (Rabbit Hole, anyone?) that manages to spin the most hackneyed shit into gold. He makes you forget that he's playing something as shopworn as the Haunted Sergeant Who Lost a Platoon. Sadly, the other character types don't have the luxury of being so well-cast: you're never given any reason to pay attention to The Engaged One, The Young Officer, The One with PTSD, The Foreign Doctor, or The Michelle Rodriguez One (Michelle Rodriguez), most of whom are given a name and a piddling prologue but are functionally interchangeable from the moment the aliens land on Earth. Even the outcome of the picture's release is bound to be trite: It'll make decent bank in a neck-and-neck race with Rango's second weekend, someone on TV TROPES will dedicate a few paragraphs to its numerous clichés, and then it will never be spoken of again. Originally published: March 11, 2011.