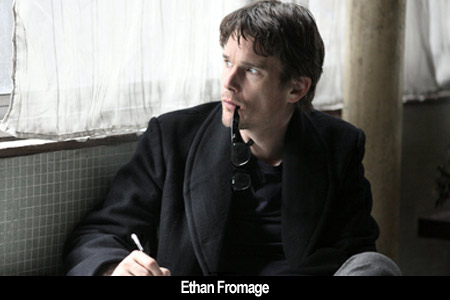 by Angelo Muredda Midway through Pawel Pawlikowski's The Woman in the Fifth, Romanian femme fatale Margit (Kristin Scott Thomas) tells glum American writer Tom (Ethan Hawke) not to worry about his writer's block. "You have the makings of a serious work now," she reassures him: "A broken life, down-and-out in Paris." Intended as a key to the film, a hint that we aren't watching real events at all but rather their translation into an American's grim European masterwork, this exchange does nothing so much as outline the limits of Pawlikowski's imagination. His first feature since 2004's unsettling My Summer of Love, this is an odd misstep, the kind of bad movie that can only be made with the purest of intentions. I don't doubt that Pawlikowski, working from a thriller by American writer Douglas Kennedy, believes in this idea that good novels are born of wretched experiences--that being a disgraced literature professor and stalled artist shaking down phantoms in run-down Paris gives you a direct line to authenticity. But it's the sort of half-baked conceit that defines countless shallow genre texts shooting for arthouse credibility, the hallmark of a Secret Window knockoff that begs to be taken as seriously as a good Paul Auster novel.

Hawke is stranded with a variation on his character from Before Sunset, which was already a spin on Hawke's public persona as a middling but earnest writer going through a life crisis abroad. Growling most of his lines in terrible French, like Nick Nolte doing Barbet Schroeder, he spends much of the movie creeping along walls, behind a host of different women: his ex-wife (Delphine Chuillot) and young daughter; a Polish barmaid who works below his shady lodgings (Joanna Kulig); and Margit, the titular woman whose novelist ex-husband was known mostly for his aversion to punctuation, which ought to make Tom an upgrade. The rest of the time, he's moonlighting as overnight security for his French-Algerian landlord (Samir Guesmi), giving him the time to craft epic letters to his daughter about his despair.

It's hard to fault Hawke for his flat work here: Tom, after all, is at best a shadow of a trope--a descendant of James Stewart in Vertigo by way of Leonardo DiCaprio's brow-furrowed widower from Inception. You certainly can't blame him for the way his mental instability is signalled by obvious choices like insert POV shots of insects crawling through cracks in the pavement, or close-ups of his Ray Ban Wayfarers (which he spends more time removing than actually wearing). There are moments when he even makes this husk of a man halfway sympathetic, bumbling after Thomas's character at a party not as smoothly as he would like but with the particular gracelessness of the ugly American academic.

Pawlikowski, to be fair, still has a good eye: Sloppy as the existential-man-as-Parisian-insect metaphor scans, there's an unvarnished lyricism to those beetle close-ups that transcends the blunt use to which they're put. DP Ryszard Lenczewski, who brought New York City to teeming life in Margaret, where Anna Paquin often registers as a blip in overwhelming pedestrian traffic, also brings a desaturated beauty to Tom's shabby haunts in the 5th arrondisement. Yet there's no getting past the tired mechanics of a script that trades in endless clichés about dissipated artists and shady doubles. In another of their enigmatic exchanges, Margit invites Tom to tell her about himself. "There's nothing much to tell," he quips, "the real me is somewhere else...accepting a literary award." Not for this dopey fever dream, presumably.