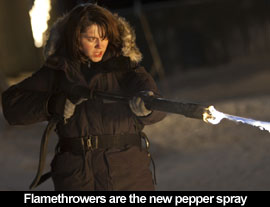 by Walter Chaw Just talking time, I've been waiting for this prequel to John Carpenter's The Thing almost twice as long as I waited for Episode I, and if the disappointment seems inversely proportional to the duration of the anticipation, chalk it up to me probably being too old to be duped like that again. (There's also the thought that Episode I killed anticipation for my entire generation.) To be fair, this Thing prequel (hereafter The Thing-quel), which imagines the happenings at the Norwegian camp prior to the titular alien finding Wilford Brimley and Kurt Russell's beard, isn't nearly as boring and/or offensive as a senate debate, a naval blockade enacted by space-Japs, and a hike in the desert surrounded by evil Jews and Arabs in the company of a Jamaican Stepin Fetchit. No, the only thing Matthijs van Heijningen Jr.'s (son of Matthijs van Heijningen, the IMDb helpfully informs) The Thing-quel does is mill around tepidly while demonstrating that Rob Bottin's seriously fucked-up creature effects from the original lose their soul when squeezed through the mainframe of a giant computer. What truly depressed me, though, were the sheer number of people at the public screening I attended with no awareness of the 1982 film, who were thus breathless with anticipation that the closing credits--which set up the opening of the Carpenter flick--were setting up some kind of remake-cum-sequel. As experiences go, it's somewhere south of getting kicked square in the sack.

Kate (Mary Elizabeth Winstead) is a palaeontologist from Columbia who gets dragged to Antarctica for her expertise in, um, sticking cameras into carcasses, I guess. She's flown there by American helicopter jock Sam (Joel Edgerton) and his Keith-David-esque buddy (Adewale Akinnuoye-Agbaje), who gets scairt at the bidding of Sander Halvorson (Ulrich Thomsen), the evil European scientor destined to engage in a "we should save it, no kill it" debate to the great dismay of all involved. Anyone familiar with the original knows that what they've found is some otherworldly beastie frozen in a block of ice (and that the beastie mimics other lifeforms)--unfortunately, nobody in this film knows what we know for the whole first hour, meaning we spend more than half the picture's running time way ahead of everyone in this piece of crap. Meaning that we're bored as hell as we wait for them to catch up. If you haven't seen The Thing, by the way, you're unbelievably lame.

There are no real stakes to The Thing-quel because there are no characters you can care about or situations that are novel. The creature escapes from the block of ice in a not-startling jump-scare, hides, gets discovered, mimics, gets discovered, mimics, gets discovered, mimics, gets discovered. The great irony of The Thing-quel is that, as an imitation itself, it's a uniquely unconvincing simulacrum of the thing it's trying to ape. Any question as to whether John Carpenter used to have the goods is dispelled in 102 minutes of not much going on, including a replacement of the previous film's blood test that is, essentially, Kate shining a flashlight into people's mouths. This should lead to something awesome, you'll agree, but not only does it not lead to something awesome, it leads to nothing at all. There's an extended last act that makes this the ridiculous little sister to Super 8, and an ending that is actually kind of...what's the word?...happy. It's gutless, in other words, not scary, without depth, without atmosphere, without anything like definition. It's not particularly gross (which it should be), it's bereft of the original's mysterium tremens (which has already spawned similarly soulless comic books and videogames--and one frankly amazing short story by Peter Watts), and it doesn't have any staying power. On the bright side, The Thing-quel screened at the same time as the Footloose remake, so thanks for that. Originally published: October 13, 2011.