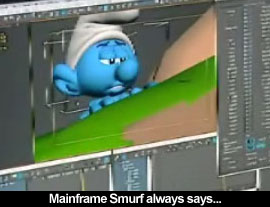 by Walter Chaw Between preaching its preach about not being pigeonholed and the importance of living life in the moment, Raja Gosnell's The Smurfs misses no opportunity to talk about the superficiality of Smurfette (voice of Katy Perry) discovering her secret shopping bug; Gargamel (Hank Azaria) turning an "old lady" into a balloon-chested hottie; and human hero Patrick (Neil Patrick Harris) helping his harridan cosmetics boss Odile (Sofia Vergara) sell gallons of snake oil to the Vanity Smurfs (voice of John Oliver) of the world. There's also a lot of pissing, puking, shitting, and farting; a disturbing running joke about putting heads on a pike; highly-imitable and often-disturbing cat violence; and a wave of overwhelming weariness that rolls off these Alvin and the Chipmunks/The Sorcerer's Apprentice pieces of shit that tend to flop but never hard enough to prevent the clockwork arrival of another something just like it. Fact is, the kid-movie market is too lucrative to not take homerun swings at it with '80s-nostalgic, high-concept falderal such as this; fact is, too, that The Smurfs, et al, come coated in critic-repellent asbestos, because no matter how deadening and odious something is, as long as your pliant and uncritical children enjoy it, it's fine. What were you expecting, Citizen Kane? Were that the same rationale applied to food made for children: what were you expecting, free of salmonella and rat turds?

Not helping is that any adaptation of Belgian acid-dropper Peyo's claim to immortality is most likely doomed to be deeply, fundamentally irritating. Three apples high, smurfs are little blue elf things that, when boiled, apparently give off a magic "essence" that baddie Gargamel wishes to gather, leading at the end to the second snapping of an all-powerful wand on the heels of Harry Potter and the Deathly Hallows Part 2. The Smurfs are named after their defining characteristic--like Disney's dwarfs, come to think of it--so time doesn't need to be spent on trying to figure out what the punchlines are once the Pez-dispenser screenplay-by-committee decides it's time to make another roundhouse lunge at funny. Failing that, The Smurfs falls on that old standby of a musical sequence when, during a session of "Guitar Hero", Brainy (voice of Fred Armisen), kilt-wearing Gutsy (not Mike Myers, shockingly), Clumsy (voice of Anton Yelchin), and Grouchy (voice of George Lopez) do their interpretation of an Aerosmith karaoke standard. Hard to watch? At least hard to watch. But, really, no harder to watch than Harris and beautiful ginger ostrich Jayma Mays as his pregnant opposite-sex mate Grace go through the motions of the workaholic-learns-to-be-a-loving-family-man masterplot.

Easy to take potshots at, The Smurfs ultimately isn't better or worse than every other movie in its genre. Things counting in its favour include the decision to cast Harris instead of Eddie Murphy or Kevin James; things counting against it are that it's terrible and, worse, terrible in exactly the same way as everything else exactly like it is terrible. Gosnell should be hung by his thumbs, but because his filmography is the fertile loam from which prefab franchises sprout, he's given the keys to the kingdom instead. The Smurfs, even as it opens in its "magical" parallel forest universe, never threatens to be interesting, never promises anything beyond broad slapstick and crowd-pleasing homilies. It identifies this Jacksonian ideal that runs deep into the bedrock of American culture of the valour of getting hands dirty and the importance of beating the holy hell out of Brainy whenever it can, physically and emotionally--and who cares, because he's for moderation in a go-go world. The worst part is that I didn't actually hate The Smurfs, since there's a cumulative effect of this stuff (see the Scooby-Doo flicks, for another instance) that tends to blunt its ability to inspire any kind of emotion whatsoever. Eventually, popular culture wins and you don't bother to fight; eventually, and it's coming for all of us, you stop realizing that there's a fight to be joined. Originally published: July 29, 2011.