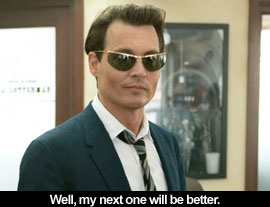 by Walter Chaw Sad, solipsistic hagiography of a hero painted by a child, Johnny Depp's passion project The Rum Diary reveals the actor to be not only dedicated now to delivering selfish shtick in place of interesting characters, but also apparently completely in the dark as to what it is that was dangerous about his idol. This adaptation of Hunter S. Thompson's long-shelved first novel--written in 1960 during a quintessential fit of hubris in which Thompson jetted to Puerto Rico to become Ernest Hemingway and published in 1998 after being discovered as paper booty in a trunk by Jack Sparrow--has at its misbegotten helm Withnail & I auteur Bruce Robinson, jerked out of retirement to reimagine a piece-of-shit novel as a piece-of-shit movie. So, mission accomplished.

Depp is Hunter as young ideologue Paul Kemp. Fresh from the Big Apple, he secures a job at a San Juan newspaper (that Thompson hissownself was unable to secure) writing horoscopes for follicly-challenged editor Lotterman (Richard Jenkins, the sole bright light), who, in his attempts to keep the paper from closing, is made out to be the bad guy. The problems with The Rum Diary are uncountable--if ever an infant should've been smothered in its cradle, it's this one--but they begin somewhere around wherever it is that no decision was made regarding what Kemp is angry about and why. There's no meat behind his many pronouncements that righteousness "smells like ink!!!" and, come to think of it, no pronouncements from any of the characters sound like anything other than ventriloquisms of Thompson's most quotable, hyperbolic bile. Until Thompson returned from the Caribbean to find the rawhide chew of the United States in its death throes, however, it's fairly clear that all he had was empty rage and limp, purple prosody. If that idiot Diablo Cody had taken credit for The Rum Diary, no one would've been any the wiser.

Lotterman is bad for wanting to keep the paper afloat by printing a populist rag, it's true, and real estate spoiler Sanderson (Aaron Eckhart) is bad for wanting to transform an island used as a U.S. naval bombing range into a resort destination. Almost a caricature of a man's fantasy of a woman, Sanderson's girlfriend Chenault (Amber Heard) is gang-raped (sort of) in a scene included in the book because Thompson of a time wished to add interracial titillation to aid in its sale (yes, what's hotter than vile racism and misogyny?), then comes to her "senses" by gravitating towards liberal demiurge Kemp. But if bwana Lotterman and Sanderson are the film's bogeys, what are the island's disaffected locals? They of the scarred faces and machetes, of the wanting white women and refusing service? Are they bad, too? Aren't they at least as indiscriminate in their intolerance as evil Yankee Mr. Zimburger (Bill Smitrovich), so handy with munitions and quick with the "nigger"? How about Kemp and his embryonic Dr. Gonzo sidekick Sala (Michael Rispoli), every bit the ugly Americans at play in the fields of the warlord? Still, although the film is, to put it delicately, a catastrophe, all would be forgiven if The Rum Diary had a glint of self-awareness in its eye--if it acknowledged that there are no battlefields because there are no sides.

At the end of his life, Thompson was as trapped in the Hunter S. Thompson persona as Depp himself is. All the fire and transgression of the sixties had hardened into a hermit living outside of Aspen and occasionally making the news because he fired something at Melanie Griffith's helicopter. Thompson didn't make the undefined, paranoid William Burroughs-ish "bastards" pay, he swallowed a shotgun in the woods when the world became an oyster he'd never again get close to shucking for its pearl. Ultimately, though, it's Depp's adolescent, puppyish devotion to the Thompson myth of rebellion that leaves the harshest echo, transforming Thompson into a standard bearer up to his Hemingway-esque exit without recognizing that once the dust settled, the only similarity between the two is the way they jumped off the carousel. Originally published: October 28, 2011.

Near as I can tell, you don't like this movie because...
1) It vilifies the editor. The movie made it clear he was in a tough position, but you think he should have been the hero for being a sell-out?
2) It's racist. Yeah, whatever.
3) It's a simplistic take on Hunter S. Thompson. But it seems you don't like Thompson anyway, so this movie was probably doomed before you saw the opening credits.
4)There are apparently a lot of other reasons, but your own prose is so purple I have no idea what you're saying half the time. I keep reading it anyway. I also urge everyone to watch this movie on Netflix streaming and decide for themselves. I liked it.