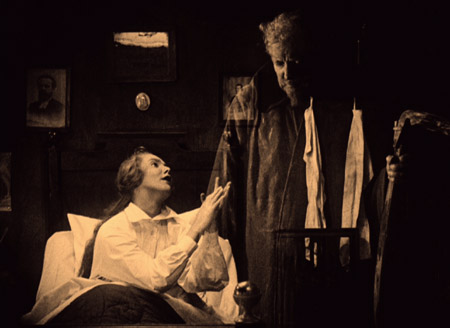 by Bryant Frazer The Phantom Carriage, a seminal achievement in silent filmmaking from that other great Swedish auteur, Victor Sjöström, is a stern, supernatural moral drama that rails against social problems of the day by enlisting an emissary from the Great Beyond to lecture the feckless, abusive protagonist on what a rotten shit he is. Sjöström remains best known internationally for his later Hollywood films, made with the likes of Lillian Gish and Greta Garbo, but The Phantom Carriage already testified to genius behind the camera as well as in front of it. When the movie finished playing, I picked up the disc's keepcase and squinted at it, in all my ignorance, to determine who so expertly essayed the central character of the alcoholic David Holm. When I read the answer (Sjöström himself), I wanted to fling the box across the room. Show-off.

Sjöström's careful portrayal of Holm is one key to the film's staying power. Holm's main failing is a devotion to the bottle that leaves him violent and mean, and it's easy to imagine the character as a buffoonish, out-of-control drunkard. Instead, Sjöström invests the man with the fierce intelligence and charisma that create his tragedy. Despite such over-the-top scenes as one where he takes a hatchet to a locked door, the better to threaten his wife and children cowering in the next room, he's not an overdrawn cartoon character, but rather the shell of a man who might just have some living left to do. Based on a 1912 novel by the Nobel Prize winner Selma Lagerlöf that (per WIKIPEDIA) sought mainly to educate the public on the scourge of tuberculosis, in Sjöström's hands The Phantom Carriage is a barely-disguised analog for the story of Christ and his sacrifice for the sake of all the wretched and ungrateful sinners of the world.

Playing the role of Jesus in this particular allegory is Sister Edit (Astrid Holm) of the Salvation Army. When the consumption-stricken Holm, wandering across the countryside after being ejected from house and home by the fed-up Mrs. Holm (Hilda Borgström), stumbles into her just-opened shelter, Edit takes him on as a special case, working into the night to repair his threadbare coat and exposing her, as the intertitles helpfully note, to Holm's disease. Holm responds to her act of kindness in a decisively uncharitable fashion, making her watch as he rips out each new seam she made, insisting, with a derisive smirk, that he likes his coat better that way. Despite the man's sociopathic intransigence, Edit badgers him over time to clean up his act, eventually declaring her abiding love for him--not a romantic love, of course, but a self-sacrificing, up-on-the-cross kind of love. The film actually begins with the poor, consumption-ridden woman on her deathbed, insisting that she needs to make one last appeal to the vagrant David Holm before she dies.

Sjöström does fine work with this material, directing actors in surprisingly loose, naturalistic performances that stand in contrast to the highly stylized acting found in many silents. His camera angles aren't particularly expressionistic, but they serve the story, sometimes simply by pointedly isolating a single character in the frame, or using an iris in to frame the actor even more tightly, lending an extra poignancy to the moment. The camera's position generally emphasizes the detailed, three-dimensional space of the movie's settings (though Sjöström had previously been known for his location photography, here he worked with his cinematographer, Julius Jaenzon, in controlled studio environments), encouraging the audience to see deep into the frame, which makes the drama feel more superficially realistic.

The Phantom Carriage didn't gain its substantial reputation as a film about social issues, however, and the care Sjöström takes with its more conventional sequences only emphasizes the ghostly impact of its supernatural passages. The catalyst for change in Holm's life is the arrival of Death itself, borne in a horse-drawn carriage driven by an unlucky chauffeur plucked from the ranks of those who die on New Year's Eve. Holm was killed, apparently, in a scuffle with some drinking buddies as the New Year's clock struck midnight. But before handing Holm the reins, the ghastly chauffeur drives him to see the dying Sister Edit.

It's in the scenes showing Death going about the business of collecting men's souls that The Phantom Carriage really grips the imagination. The simple design of Death's carriage, with horses outfitted to look nearly skeletal and the robed, hooded driver toting a weather-beaten scythe over one shoulder, is quite effective. (The vision of Death Ingmar Bergman conjured for The Seventh Seal is a white-collar intellectual compared to this earthy, working-class labourer.) Moreover, Jaenzon's technical prowess in creating the film's many-layered double- and triple-exposure shots is remarkable. Of course, double-exposure was a trick that dated back to Méliès, but the demands of The Phantom Carriage--some objects are visible through the transparent forms of the spectral carriage and its occupants, while others block our view as they pass behind them--elevated the level of difficulty considerably. For Jaenzon, it was an issue of matching both the camera position, so that the ghosts appeared to move in and around the physical world (and to light those elements so that they were clearly visible on screen), and the camera-cranking speed as each individual element of the shot was exposed.

It all adds up to a compelling fable, the mawkish qualities of its Protestant redemption story elevated by the humanizing qualities of Sjöström's acting and leavened by the mythic, explicitly Dickensian qualities of its spook show. As Sjöström silents go, it doesn't have the intense, elemental quality of his later, one-of-a-kind masterpiece The Wind (1928), nor does Sjöström's own performance match the one he would deliver much later as the lead in Bergman's Wild Strawberries (1957). Yet Sjöström brings an impressive B game, and The Phantom Carriage is rife with that creeping feeling of spooky unease that characterized so many European silents, plus the religious dimensions that the Scandinavians brought to the table. At the very least, you can pair it with such dire treats as Benjamin Christensen's Häxan and Carl-Theodor Dreyer's Vampyr and seriously class up any Halloween get-together you may be planning.

THE BLU-RAY DISC
Releasing The Phantom Carriage on Blu-ray and DVD gives Criterion another opportunity to indulge its long-standing Ingmar Bergman fetish (in case you couldn't guess, Bergman was a huge fan of this Sjöström film in particular) while simultaneously expanding the boundaries of its collection: dating to 1921, it's officially the oldest title in the company's catalogue. And, holy cow, does it look good. Well, it obviously wasn't shot yesterday. The picture is, frankly, scratched to hell, it flickers and wavers a bit from moment to moment, and film damage is occasionally visible, especially around the edges of the image. The occasional thick hair is visible jutting into the frame, caught either in the gate of the camera during photography or introduced during the printmaking process. All that said, the transfer is breathtaking. Shadows are deep, with plenty of detail. Overall sharpness varies a bit from scene to scene, but some shots have an impressive photographic clarity that shames more than a few contemporary HD transfers and puts the lie to the widely-held notion that silents somehow don't stand to benefit much from the Blu-ray format compared to DVD.

The achievement is that much more impressive given the source material--according to the liner notes, a black-and-white dupe negative was created from two different nitrate prints (one black-and-white, one tinted) by the Swedish Film Institute back in 1975. The new digital master was created in Stockholm as a 2K scan from that negative. (Colour tints were added later, using the tinted nitrate print as a reference.) As usual, Criterion has found a point of equilibrium where the picture has been cleaned up without becoming synthetic. Measuring 1.37:1, the pillarboxed, AVC HD image is encoded as 1080i, presumably allowing the use of field-interlacing tricks to closely match the intended frame rate on HD displays. I don't know a good way to measure this, but it looks like 18 or 20 fps to me; this increases the sensation of flicker but preserves the intent of the filmmakers, who never meant to have their characters run around like the oversized ant-colony denizens you see too often when silent movies are transferred at inappropriate frame rates.

Two soundtracks are available for The Phantom Carriage. A chamber-orchestra score by Swedish composer Matti Bye (he's done similar work for Häxan and director Mauritz Stiller's The Saga of Gösta Berling) was recorded at a 1998 screening of the film and is offered here in 3.0 DTS-HD Master Audio. It sounds fine, with good depth and separation of the instrumentation across the three front channels. A more ambient, doom-laden approach is taken by KTL, a duo consisting of Stephen O'Malley (of the drone-metal act SUNN O)))) and electronic musician Peter Rehberg, and it's available in two-channel LPCM. A sizable contingent of silent-film fans has always insisted on musical accompaniment that feels contemporaneous with the original release, and if you're one of those people, you need never click over to the KTL score. I found it interesting but a little too diffuse--I'd be as likely to throw on some Ligeti or Godspeed You! Black Emperor and take my chances.

Special features are adequate but unexceptional. Copenhagen-based academic Casper Tybjerg contributes dry but informative commentary on Sjöström's technique and background, the state of the Swedish film industry circa 1920, and the life and times of novelist Lagerlöf, who had personal reasons for advocating temperance. Considering The Phantom Carriage's place in history, Tybjerg asserts that it was, at one point, as famous as The Gold Rush, The Cabinet of Dr. Caligari, and Battleship Potemkin, but argues not only that its groundbreaking special effects were a liability with serious critics (he cites an André Bazin essay titled "Life and Death of the Double Exposure"), but also that edits made to the French release version cheapened its reputation with French cinema historians.

The disc also features about five minutes of footage (with piano accompaniment) documenting the construction in 1919 of the new Svensk Filmindustri studios, where The Phantom Carriage was shot. (It's presented in HD but looks to be an upconvert, probably from a decent PAL video source.) "The Bergman Connection" is an 18-minute, HiDef "visual essay" (it's mostly still photographs but includes tantalizing HD clips from the forthcoming Fanny and Alexander) with narration by that old Criterion standby Peter Cowie, who drags superficial elements of disparate Bergman films into the picture. A little more interesting is a 15-minute excerpt, again in HD, from the documentary Victor Sjöström: A Portrait (Gösta Werner, 1981), in which Bergman himself expounds at some length on what Sjöström's work meant to him. Finally, the insert booklet contains an essay by critic and screenwriter Paul Mayersberg (The Man Who Fell to Earth, Croupier) on Sjöström's history and legacy as well as The Phantom Carriage's reception. A decent package. October 11, 2011.