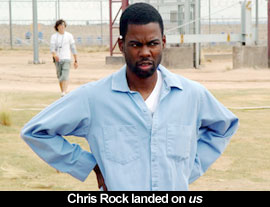 by Walter Chaw Chris Rock seems like a smart dude. His stand-up is sharp and perceptive and his now-defunct pay-cable talk show broke some ice in the traditionally chilly national race conversation. So know that I say this respecting Rock's abilities in certain areas: Chris Rock is not now, nor will he ever be, a viable presence in film. He has no charisma that translates to the silver screen, none of that "it" factor that draws the eye to him, and when he's forced to follow a script, whether he's written it or not, he sounds desperate and pinched, as though he were being pulled through a garden hose. He joins giants like Richard Pryor in that no matter what you thought of Stir Crazy, it's a far cry from his seminal work on stage. That Chris Rock is now in two major motion pictures seeing release on the same day both bolsters the suspicion that Rock is a smart dude and provides two new examples of Rock not only not possessing that movie star quality, but also lacking the potential to be movie star material. With the inevitable success of these films, however (none of which will have anything to do with Rock), put your money on the man making a few more sad attempts at headlining a picture before Hollywood discovers what most of us already know.

First up, Peter Segal's The Longest Yard: ostensibly an update of Robert Aldrich's fondly-remembered testosterone sports opera, it plays more like the long-awaited feature film adaptation of the XFL. Gone are Aldrich's characterizations, such as they were, replaced by hoary prison-movie clichés grafted onto hoary underdog sports uplift clichés. It's a vehicle for Adam Sandler, taking over Burt Reynolds's role in the original (Reynolds, meanwhile, takes over Michael Conrad's role; and Conrad was probably never gladder to be dead) as Paul Crewe, an ex-NFL MVP sent up the river for shaving points off a game and being, in general, a son of a bitch. I liked Sandler a lot in Punch-Drunk Love, a film that understood his lisping man-child with anger issues persona as something pathological and generally unpleasant; I like him considerably less in his showcase vehicles, where his Pauly-Shore-like dementia is regarded with adulation and doe-eyed acceptance. But the absolute worst thing about Sandler's vanity pieces is that he's loyal to a fault to his entourage--and Rob Schneider is part of that posse.

James Cromwell brings his stentorian authority to the evil warden role while a parade of rappers, wrestlers, and ex-NFL ballers round out the menagerie with results best described as grotesque and self-aggrandizing. Former Raiders linebacker Bill Romanowski--the guy who ended a teammate's career by beating him near to death during practice, spit a couple of times on black opponents, and has admitted to using steroids to fuel his rage and performance--gets to spit on someone here, too, and Cloris Leachman turns in her patented over-sexed senior role that's destined to extend her career well into this new millennium. So much of the laughter in The Longest Yard is of the derisive variety that it functions as a catharsis for anger and intolerance. You're encouraged to scoff at gays, old people, fat people, stupid people, Chris Rock, white people, black people, and Latinos, and when the guffaws aren't rolling, Sandler steps in as the quiet representative of the ruling class, rolling his eyes and offering dismissive rejoinders that are the very manifestation of a flashing "laughter" sign, prodding the masses to grumbling life. It's easy, formula stuff fine-tuned with surefire gags (football to the groin! knee injury! fags in cheerleading outfits!) that's going to pack 'em in in a football-mad, Sandler-mad country.

With The Longest Yard taking care of the adolescents literal and figurative, Chris Rock seeks the approval of the diaper set with DreamWorks' animated odyssey Madagascar. Obsessively described as a more "cartoony" CGI production owing a debt to groundbreaker rebel Tex Avery that I couldn't discern no matter how hard I squinted, the picture follows four Manhattan zoo animals as they break out of captivity and find themselves deposited on the island nation of Madagascar. It's a cat (and zebra, giraffe, hippo) out of water comedy that doesn't really deal that much with the possibilities of the premise beyond having lion Alex (Ben Stiller) begin to revert to his carnivorous ways, viewing his pals as giant walking steaks. Facing a mid-life crisis, the hero, a zebra named Marty (Rock), decides to take a walk around the boroughs one night just to see what there is to see. Earth mama hippo Gloria (Jada Pinkett Smith) and irritating nebbish giraffe Melman (irritating nebbish David Schwimmer) join Alex on what they perceive as a rescue mission but which ends up as a state of emergency, leading to the exile of the critters to a zoo in Africa. A quartet of militarily-drilled penguins hijacks the ship, however, stranding the main foursome on the titular isle as they themselves seek to repatriate themselves to Antarctica.

Madagascar is mostly free of the scatology that marks the Shrek films and avoids too the implied sexual violence and racism of new Disney product--and for a while, it seems like it might make a play at the rarefied air of Pixar and their heretical desire to produce children's entertainment for the smart children. Marty, in Rock's signature bray, wonders one New York night if he's black with white stripes, or white with black stripes--a thorny question for an immigrant, orphaned child living in an unnatural environment in the crossroads of the world, no question. Better, there's this sense that cultural deprivation leads to a hungry and curious heart, hence Marty's escape, hence his brief rapture in the wild. Issues abound in Madagascar, begging for a home--questions of friendship and identity across cultural boundaries, nature/nurture, how the individual changes once exposed to his/her native self, on and on. All of it's wasted, really, on another run-of-the-mill slapstick cartoon that, after a marvellous hallucination culminating with a hippo dressed as the Statue of Liberty, becomes a procession of the usual pop-smart references to stuff like Cast Away, Planet of the Apes, The Mission, Chariots of Fire, "Hawaii Five-O", and that "To Serve Man" episode of "The Twilight Zone".

But meta doesn't automatically mean clever. The Shrek series, after all, is just a progression of pop-cultural artifacts replayed by ogres (the mainframe equivalent of dogs playing poker, non?)--great fun for people who aren't that good at Trivial Pursuit, but with that they were. I wish something salvaged Madagascar beyond the keening lament that it's not as bad as it could have been or, at least, not as bad as I thought that it was going to be--in a climate of general degradation, when something doesn't make you want to injure yourself or, relatedly, cause physical pain on its own, it tends to get a pass. It's a losing battle fighting for art that deserves commentary and immortality, and I'm getting tired of fighting it, you might have noticed. Particularly when in one weekend, the one following the weekend where the latest Star Wars disaster set box-office records, two Chris Rock movies are going to be argued and wrestled over with the same kind of intensity that we should devote to stuff that people will actually remember in a couple of years. Me, I forgot Madagascar almost as soon as it unreeled. Sometimes the only thing a work deserves is judgment, you know, anything else is just a waste of my time and yours. Originally published: May 27, 2005.