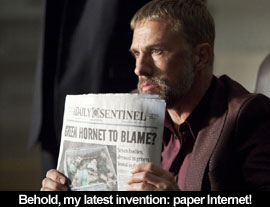 by Walter Chaw Lenore Case (Cameron Diaz) asks chauffer Kato (Taiwanese pop star Jay Chou) out on a date in Michel Gondry's excrescent The Green Hornet, and then, once on that date, acts surprised when Kato makes a pass at her whilst tickling the ivories. It's the only thing of mild interest in a film that's otherwise the obvious front-runner for a few worst-of-2011 lists--a fate it'll probably avoid only because no one will remember the benighted thing an hour or two after screening it. Give The Green Hornet this, though: it's the first mainstream American film to even flirt with the idea of Yellow/White miscegenation since maybe the 18-year-old Dragon: The Bruce Lee Story, Rob Cohen's biopic about Chou's hero and the true antecedent to the Kato role. It's funny to me that men from one of the most populated places on the planet have, in the American cinema, been reduced to hilarious, impotent sidekicks or wise old men who know kung fu--or is there some kind of Little Richard image-castration going on here to protect delicate Caucasian egos from bedroom Yellow Peril? No, more likely the instinct that makes it funny to cast someone like Jackie Chan as Chris Tucker's bitch in the United States is the same one that fuels Chou's eventual rescue in this piece of shit by the titular lummox, played by Seth Rogen (make that rescues--the first coming when The Green Hornet tosses poor, dumb Kato a lobster-shaped inflatable to save his drowning ass). It's the same one that casts Mexicans as chulo drug-dealers hanging out on the East Side and poor Christoph Waltz, Oscar still warm, as an insecure crime lord given to monologues and bemoaning his mid-life crisis. The Green Hornet is bad stand-up, all improvisation and flop sweat you get to endure for over two full, agonizing, distended hours.

The Green Hornet, for the uninitiated, is "dashing" newspaper publisher Britt Reid (Rogen), who, um, publishes a newspaper by day, I guess, and is a crime-fighting vigilante by night, faithful sidekick Kato in tow. That it plays better on radio of course didn't stop the concept from spawning a television series, comic books, kid's pulp, a few B-movies, and now this abortion. Kato, it's interesting to note, began as Japanese, morphed into Filipino following the attack on Pearl Harbor, and then turned Korean, before finally finishing his Pacific Rim tour Chinese--evidence, basically, of how interchangeable these distinct cultures are to an American audience; you gotta believe the reason the brilliant Stephen Chow stepped down first as the director, then as Kato was that it became clear that a satire of the whole mess was the last thing on the producers' minds. A good thing, too, as the last word on this particular stereotype of Kato was probably had by the Pink Panther's own trusty, ridiculous Cato. Sitting in a theatre publicity-packed with braying morons howling their approval at Rogen's "You speak-a Engrish, now!," I realize, with thanks to Gene Yang for articulating it for me, that I feel like a chink sort of all the time.

You don't, however, have to be Chinese to hate this iteration of The Green Hornet. It's a disaster along the lines of Jeremiah Chechik's big-budget adaptation of TV's "The Avengers": misguided, misdirected, written with the grace of a concrete mixer, and full (but not full enough) of action set-pieces that make up for in complete incoherence what they lack in excitement. It has a moment at the end of genuinely ugly violence that feels totally out of place in a movie so cowardly and lumbering to that point, and throughout, it contradicts the rules and motivations it sets up for itself with the consistency of something that's making it up as it goes along. It casts a Girl Friday in the Lenore character and essentially reduces her to naughty workout gear and a good attitude as the rope in a limp sexual tug-of-war, and it opens a few father/son tensions it has neither the wit nor the intelligence to honour. This is the type of movie where you can tell when it thinks it's being exciting and funny, drawing us in on the discomfort when it turns out to be deadly stupid.

At least it's smart enough to know it's in the deep end and sinking fast, inserting a few hearty nut-punches early and often in the tacit acceptance that if nothing's working, give a man a quick shot to the nards. Chou's fight sequences are slow-motioned and sexed-up to dada but, sorry, it's just not taking. Cast fucking Chris Tucker in the role of a masked sidekick in a chauffeur's outfit, master of da gat, who invents an espresso machine so his boss can have a good cuppa joe and consider again exactly how innocent this Kato character should seem to us unadorned with self-awareness. (Better: rent Danny the Dog to see precisely how the West views a character like this--and the East, as well.) Look again at a scene where Britt is cavorting with a few bathing beauties as smart, industrious Kato stumbles around the pool, carrying boxes on his way to working hard. Check out the scene where Kato drives a car through a newspaper newsroom for no reason at all except to provide a fascinating visual metaphor for the kind of sledgehammer ignorance and illiteracy this movie represents. There's a good reason The Green Hornet has been dumped in the middle of the January dead zone, and it's got nothing to do with the complexities of 3-D conversion. The picture has no reason to exist, yet exist it does, thus between movies that might be good and movies that might be exciting, it fills this unenviable slot as neither. Originally published: January 14, 2011.