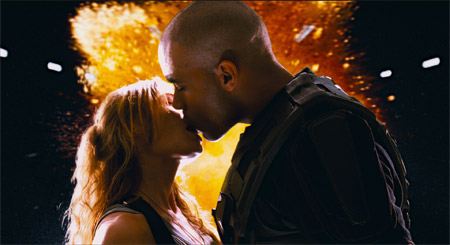 by Bryant Frazer Hollywood has lately been lousy with torpidly sincere, marquee-name-bedecked anti-war movies, but leave it to the auteurs working in the low-budget trenches to devise an impolite satire of current war efforts. Starship Troopers 3: Marauder isn't exactly deep, but it is an Iraq War allegory that takes on not only the political groupthink that comes with a war well-fought, but also the delusional, God-on-our-side religious angle. In this ramshackle action adventure written and directed by Ed Neumeier, co-writer with director Paul Verhoeven of the original Starship Troopers (which was more a rambunctiously contrary riff on Robert Heinlein's same-named novel than an actual adaptation), the Federal Network's space marines are fighting against a race of alien bugs in an interplanetary war that's become so unpopular that the penalty for anti-war protestors is televised hanging. "This is a very simple ruling," declares one federal judge before an execution, adding--in quotation of a notorious comment made by White House press secretary Ari Fleischer in September 2001--"People need to watch what they say."

That's just one of several winking asides that directly and deliberately refer to the Bush Administration. Among the major characters is Sky Marshal Omar Anoke (Stephen Hogan), a career-politician type who sings a popular propaganda anthem called "A Good Day to Die," an apparent allusion to former Attorney General John Ashcroft's penchant for writing such patriotic tunes as "Let the Eagle Soar." One of the Federal Network propaganda videos that regularly interrupt the narrative action features the straight-out-of-the-GOP-playbook spoken line, "Are we losing this war? Don't bet on it, citizens!" When somebody proposes peace negotiations, the incredulous reply is, "What--appeasement?" And so on.

Ambitiously, Neumeier mixes religion into the satire. He does seem a little dubious about the idea of faith in general (Anoke himself is a recent religious convert who found God by taking communion with the huge, vulva-mouthed "brain bug" captured at the end of the original film), but he's really after the politicians who use religion cynically to bolster support for military engagement. Over the course of Starship Troopers 3, the human government's position on religion evolves from wary tolerance (because the more pious citizens tend to oppose the war) to outright enthusiasm, once the military manages to conflate aggression and holiness in the public mind. "God's back," declares a government mouthpiece at film's end, "and He's a citizen, too!"

After the Earth's Mobile Infantry are driven from the farm planet Roku San as the bugs overrun their base's defenses, Anoke manages to get marooned on a distant planet with Captain Lola Beck (Jolene Blalock, who enjoys unassailable geek cred as a result of having played a Vulcan), a soldier who would be valuable to the mind-reading bug overlords because she knows the location of the Fleet's secret Sanctuary headquarters. Meanwhile, her ex-boyfriend, Colonel Johnny Rico (Casper Van Dien, returned from the first film), finds himself at the wrong corner of a love triangle as her new squeeze, General Dix Hauser (Boris Kodjoe), slates him for court martial.

It all culminates in a climactic third-act bug battle that suffers for insufficient funds: The flat CG effects would barely pass muster in a Dreamcast-era videogame, though there's a grungy charm to the bargain-basement atmosphere. One bug attack is staged, with a wink, as a budget-friendly shadowplay glimpsed by a camera set up around the corner from the real action. I really liked one priceless shot featuring a glimpse of big latex bug puppets chasing the space marines through their base. (Old school! Hoo-ah!) The Marauders of the title are the big, armoured suits that the soldiers wear to do mechanized battle with the enemy--military gadgetry that figured heavily in Heinlein's novel (but not the first movie) and has strongly influenced certain genre efforts (especially manga, anime, and video games) ever since. CG-executed, they're saved for the final reel.

Fortunately, Starship Troopers 3 doesn't solely rely on low-rent action and effects. Neumeier's scene compositions and blocking are carefully conceived and his cast is uniformly attractive, making the movie pretty easy to watch. He's created mildly amusing characters, like French-accented autograph hound Lieutenant Link Manion (Cecile Breccia), or the simple-minded but devout Holly (Marnette Patterson), who rallies happily behind Anoke only to vocalize her dismay at the revelation that he worships the wrong God: "That's blasphemy... Maybe we should kill him." Neumeier's treatment of Holly turns slightly aggressive in a scene where attacking bug limbs create a fissure in the ground that appears to point the way up her skirt, a punitive and/or sexist gesture that nonetheless functions as a directorial attack on her smug moral certainty--the kind of tasteless exploitation element that makes B-movies run. (Frankly, this movie could stand a little more Verhoeven-style rudeness.) But her proselytizing is eventually successful, converting even the skeptical Beck in a prayer-in-the-foxhole moment. As dozens of bugs scramble over the horizon and all hope seems lost, the two women fall to their knees and join hands, pleading to God for a cavalry rescue. Within minutes, Holly gets a halo of carpet-bombing mech soldiers, and a machine gun forming the shape of a cross is superimposed over her face. The effect of that answered prayer is powerful: "I got religion, Dix," a smiling Beck avers in the film's final scene. "I got it bad."

The satire here is amusing but not especially cutting--the original film, mistaken as un-self-consciously fascist in some quarters, is a much sharper instrument. Starship Troopers 3: Marauder remains a B-movie, shot on a miniscule budget without the kind of gusto and energy that distinguishes the best low-rent genre efforts; it can only be recommended to viewers who enjoy this sort of thing. Happily, thanks to its wry comedy, political underpinnings, and attention to basic principles of craft, it can be recommended more enthusiastically than most bargain-basement genre exercises. This one deserves its Blu-ray debut en route to an inevitably long life in the wee hours of cable programming, even as much of its situation-specific satire will be lost on future viewers.

THE BLU-RAY DISC
Sony's typically flawless HD presentation reveals the film's budgetary limitations, drawing attention to the underwhelming computer animation and highlighting the uneven film grain and other artifacts that are occasionally visible in the VFX work. Some shots have been pretty well set up by cinematographer Lorenzo Senatore--who also operated his own SteadiCam--while others have a rushed, deadline-driven look, as if he lit them like a grocery store and just rolled film. (At Blu-ray resolution, you can actually tell that a few shots are slightly out of focus.) Still, the otherworldly, turquoise-shaded landscape of the uncharted planet where Anoke and crew crash-land is a gorgeous showcase for HD's colour-reproduction capabilities. The tack-sharp 1.78:1, 1080p transfer also reveals plenty of detail in the source material--you can even read the patent number on the Morita-branded BFGs the soldiers carry around. As for the soundtrack, I listened to the 640 kbps core of the 5.1 Dolby TrueHD option, which was often as raucous and militaristic as you'd expect, although some scenes have a surprisingly low-key mix. It's a low-budget effort for a low-budget movie, but I'd describe image and sound as solid nonetheless.

The extras include something called "Marauder Mode," a variation on the picture-in-picture trivia mode that's become de rigueur on high-profile releases. On this disc, there's a sci-fi-style window superimposed over the edges of the original image that is moderately irritating--it wrecks the film's on-screen graphics, which are partially blocked by the overlay. The content, however, is interesting. There are small pop-up windows conveying trivia about the fictional weaponry on screen, but this mode also brings in crewmembers like stunt coordinator Anthony Mo Marais, production designer Sylvain Gingras, and VFX supervisor Robert Skotak to discuss their contributions to the film. (It would be nice if this material were a little more scene-specific.) Here and in the accompanying audio commentaries, Neumeier and company are candid about the budgetary conditions under which the film was made. The "filmmakers commentary," in particular, featuring Neumeier, Skotak, and producer David Lancaster, goes into lots of detail--maybe too much detail?--about how the various collaborators brought everything together, from production design and camerawork to sound and VFX. And at the end of the director-and-cast commentary track, Neumeier drafts both Blalock and Van Dien for another movie--or TV series?--should such a thing come to pass.

There are two 1080p featurettes. "Enlist: Marauder's Mobile Infantry" (14 mins.) is a piece in which the actors, primarily, talk about their characters. "Some of the stuff they're saying is quite ludicrous," observes executive producer Claudio Faeh. "We needed smart [actors] who saw the irony in it all." And "The Bugs of Starship Troopers 3: Marauder" (12 mins.) looks at the creation of the alien creatures (including the humongous granddaddy of all "brain bugs," named Behemecoatyl), which were executed using practical FX techniques whenever possible (meaning the images were captured in camera using puppets and the like, rather than created as VFX in post-production). A full-length HD music video for "It's a Good Day to Die" is on board as well. Trailer fans can enjoy HD previews of Prom Night, 88 Minutes, 21, Vantage Point, Dragon Wars, Resident Evil: Degeneration, The Fall, Untraceable, and the original Starship Troopers.

The final bullet point out of the Sony Pictures marketing department is a BD Live feature that purports to let you have your face digitally inserted into scenes from the movie. Sounds like pointless fun, but when I tried to sign up for the it (you have to provide an email address to find out how to upload your image), all I got, repeatedly, was a cryptic "registration failed" message. On the evidence, then, BD Live remains unready for prime time.

Most of the information conveyed in the Blu-ray extras is at least mildly interesting, although there's a lot of redundancy. For instance, if you listen to the commentary track, you'll hear about the sushi diet Van Dien went on in preparation for the peek-a-boo nude scene he plays with an intergender group of soldiers being fitted for Marauder duty. If you watch the same scene in Marauder mode, well, you'll hear about it again. You'll hear repeatedly that Jolene Blalock was good in her role because she was able to express authority without yelling. And you'll hear lots about which bits of a scene were filmed on location in South Africa, or were shot on a soundstage, or were enhanced by VFX. (For my part, I'd love to have heard Neumeier's thoughts on the film's satirical content, but he generally talks nuts and bolts here, not creative ideas.) This disc offers a fairly complete package, but it feels a little bloated. Originally published: September 23, 2008.