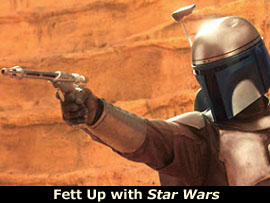 by Walter Chaw George Lucas and Jonathan Hales's screenplay for Star Wars: Episode II - Attack of the Clones is very close to the most inept piece of hubristic garbage I've ever had the alarming misfortune to see realized. The resultant film is 140 minutes of pure treacle: such words as "awkward swill" or "excrescence" do not begin to suggest the stink of it. While Lucas has always been a poor filmmaker (though THX 1138 at least displays directorial competence), his army of yes-men and his years of hermitage have led him to believe that his are the hands best-suited to guide the last three films of his Star Wars franchise--and that miscalculation will sadly only cost him the last lingering vestiges of his already miniscule credibility. In a way, though, I'm grateful to Lucas for making my job easier: Episode II is so atrocious that its screenplay--with lines like, "This is a nightmare! I want to go home!" and "You obviously have a great deal to learn about human behaviour"--serves as auto-critique, and its clumsiness as its own most damning censure.

Anakin Skywalker (Hayden Christensen) is twenty years old and a Jedi "Padawan" (apprentice) chafing under the stern eye of his master Obi-Wan Kenobi (Ewan McGregor). They are assigned as private bodyguards for Senator Amidala (Natalie Portman)--a queen in the last film, demoted to a position in congress because in Lucas's perversely democratic universe, a monarch has a two-term limit. I'm not going to waste my time detailing the C-Span intrigues and all the smug inside-joking about creation mythologies and leaden ironies (frankly, they don't pay me enough to do so): Episode II, you see, is more a sequence of events related to an assumed knowledge of the Star Wars universe than a proper narrative. A discussion of plot would take almost as long as watching the offal for yourself.

Suffice it to say that Episode II is lifeless and listless in equal measure, a curiously impotent saga that has not a single moment as stirring as the dullest moment of the original trilogy. It's an exercise in spectatorship in which the special effects are clearly the backbone and heart of the film, to the extent that even the characters stop to gawp at the digital pyrotechnics. The movie grinds to a halt each time its sterile effects are moved off centre-stage--something that happens quite a lot in a lugubrious film well over two hours that features a mere three action sequences. For as little as I like Episode II's video game feel and look (see especially a conveyer belt bit that plays just like the SNES Star Wars game), it's still preferable to Lucas's unspeakable dialogue and the performances of Christensen and Portman, which are so stilted and unnatural that I actually felt sorry for them--when I wasn't checking my watch and eyeing the exits wistfully.

Tom Hanks tells a tale of finding his performance in Forrest Gump after observing Michael Conner Humphreys's performance as the younger version of the title character. Hayden Christensen, portraying Anakin Skywalker as a late teen, has likewise taken a page from Jake Lloyd's legendarily awful performance in Episode I and replaced a model of bad turns that has stood since Travolta's in Battlefield Earth and will stand at least until Christensen himself reprises "Ani" in the "no one in their right mind is looking forward to it now" Episode III. He never delivers dialogue in anything approaching a simulacrum of humanity (though admittedly, he never has a good line to deliver): his droning lament following the slaughter of an entire tribe of disturbingly minimalized desert nomads strikes as especially unforgivable in light of its racial implications and (intra-textually) the almost total lack of concern Amidala expresses towards her prospective beau's psychotic break. I could politicize here, but what's the use of lamenting the franchise's continued vilification of Asians, Jews, and Blacks in "wink wink" alien lingo and caricature if no lessons were learned from Episode I?

Episode II was executed in a vacuum, having no relationship to anything save itself and displaying peculiarly misanthropic agoraphobia in the script's impossible language (Lucas may be the only screenwriter incapable of writing in iambic pentameter), lack of connection with true emotions, and total inability to tell an interesting story (or any story) with a basic level of competence. It is a crippled, hamstrung thing more pathetic than truly offensive.

Consider a scene where Amidala runs along a verdant hillock in a weird Maria Von Trapp moment, or when a lowlife tries to sell Obi-Wan "death sticks" and it's revealed that "death sticks" are cigarettes, or its cadre of flying monkeys, or a five-minute sequence in which a beheaded C-3PO jauntily ripostes: "Arrgh! I've lost my head," "What a drag!" (as his head is being drug), "I'm beside myself!" (when his head is placed beside his body), and "I can't seem to get my head on straight!" (after his head has been reattached). There is an abstract bit so sly I wonder if it was slipped in unbeknownst to Lucas: the bounty hunter Jango Fett (Temuera Morrison), possibly (but probably not) named after guitar legend Django Reinhardt, drops "seismic charges" in an all-too familiar asteroid field that explode with a D-minor twang! Aside from that discordant (and most likely accidental) grace note, Episode II actually borders on the aggressive in its open disdain for structure, performance, and its audience--the film knows that it will take in a great deal of money no matter the critical or popular reception and thus proceeds to be the worst it possibly can be.

Episode II: a rambling behemoth without a pilot; a sucking black hole that continues to fecklessly sully the memories of an entire generation of folks (like myself) who grew up playing with the action figures while considering the "big" polarities of good vs. evil, light vs. dark, and what it means to be a friend, a brother, and a son. Though the only film of real artistic value in the initial trilogy is The Empire Strikes Back in retrospect, the original Star Wars trilogy was possessed of an energy and passion that forgives it a multitude of sins. A lot of the wonder and hope and magic of my childhood died in Episode II upon Yoda throwing back his robe like a gunslinger, striking a kung fu pose, and launching into a lightsaber attack like a crazed green Muppet incarnation of the Tasmanian Devil. "Pain, suffering, death: I feel," Yoda intones. I feel it, too, man.

You don't need to be a child or pretend to be a child to enjoy Star Wars: Episode II - Attack of the Clones--you need to have no need of fundamental rules of storytelling and coherence, no appreciation for the art of filmmaking and acting, no sense of grace, and no patience for the subtleties of tension and character development. You need, in other words, to be George Lucas. I hope you enjoy it, sir, your film is definitely something to behold. Originally published: May 16, 2002.