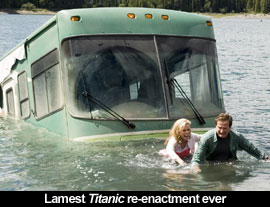 by Walter Chaw Shit, feral raccoons, hillbillies, tits, white-boy Ebonics, more shit, and oodles of forced sentimentality to propel the septic stew down our collective throat as we strain towards it, baby bird-like. Or so the theory goes. In the interest of complete disclosure, the reason Barry Sonnenfeld's excrescent R.V. dodged a zero-star rating from me is that I actually laughed at a perversely perfect sewage geyser. It's one thing when you're all about the slapstick gross-out gag; another when, National Lampoon's Vacation-style (the film that, structurally, R.V., Johnson Family Vacation, Are We There Yet?, and so on most resemble), your trip across the middle of the United States yields insights into the caste and racial strata of our expansive country. Then you have a feckless relic like this that pulls its punches even in regards to the bigotry it directs at rednecks. There's nothing to hold onto in R.V., and it tries so hard to please that there's not much joy in taking it down. It's like kicking a puppy, with the puppy trying to lick your boot as you do it.

Bob (Robin Williams) works too hard and doesn't spend enough time with his family and yadda yadda yadda and blah blah blah. He rents/buys a giant RV and convinces his princess wife Jamie (Cheryl Hines) and evil, spoiled children (Josh Hutcherson and something called "JoJo") to go on a road trip to reconnect, but lo, it's secretly a working vacation, the revelation of which will cause the freshly-resurrected marriage to strain for a few minutes. Williams is perfect for this recreational vehicle because he's always liked to combine his antiquated, manic shtick (the picture opens with him doing a surprisingly poor Sylvester Stallone impersonation) with weepy-eyed sentimentality. At least Williams gets a lot of opportunity to work on his self-imitation, although, let's face it, even that isn't in the same ballpark as Jim Carrey's nowadays. And if Williams's gagging feels forced and artificial, the audience's gagging seems entirely genuine.

If you go to this gas trap, you have to know exactly what you're about to experience; as with most things in our culture, garbage like R.V. perpetually regenerates because we want it to. People patronize R.V., probably propel it to the tops of the box office, because they're either not high on discretion or are being dragged there by the same--they're either stupid or weak, resulting, of course, in entertainment that shares those qualities in spades. Bob's family intersects with a family of backwoods residents led by patriarch Travis (Jeff Daniels) and bimbo wife Marie Jo (Kristin Chenowith)--whom Bob, horrifyingly, speculates aloud is a hooker over dinner she's prepared for him and his family--and rounded out with a trio of children Bob's kids make doe eyes at in just one of the subplots R.V. blissfully fumbles. And the punchline is, you guessed it, that the hillbilly clan is Stanford-educated and moral, which suggests not that Bob's family is un-educated and amoral, but that they're smart and good as well, papering over issues of class and decency.

Rather than bemoan how gifted performers like Hines, "Arrested Development" alumnae Will Arnett and Tony Hale, and Daniels are wasted in this pandering, derivative, interminable dreck, it's more instructive to note how Robin Williams is not. R.V. is an episodic death march that hangs long minutes on gags involving a seat-belt that won't extend and Hines singing Ronny and the Daytonas' "Little GTO," tone-free, to the consternation of a disinterestedly-mugging Williams. When the kids are irritating (especially the female named JoJo), they're genuinely irritating--which is either great acting or a really bad idea or both; and when the poignant guitar cues up, that weird noise you hear in the theatre is a few dozen fingernails digging into armrests. R.V. is what it is--up to you whether you take that as either an endorsement or the harshest criticism I can level. Originally published: April 28, 2006.