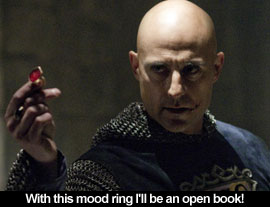 by Walter Chaw Predictably, achingly, perfectly okay, Ridley Scott into his dotage has produced a string of absolutely unsurprising, overlong, uninspiring-if-occasionally-visually-striking films, of which Robin Hood is only the latest. An attempt to "reboot" the Robin Hood legend with a "prequel" that shows how a middle-aged Robin (Russell Crowe) meets his Merry Mystery, Alaska Men, woos freshly-widowed "maid" Marion (Cate Blanchett), sort of composes the "Declaration of Independence," directly influences--it's implied--the signing of the Magna Carta (in the completion of which the film's real hero, William Marshal (William Hurt), was instrumental) not long after the events of the movie, and enters into a life of sylvan banditry at the prodding injustice of ineffectual King John (Oscar Isaac, doing his best Russell Brand). It also suggests that Marion is a Maid of Orléans figure who rides into battle alongside the menfolk to repulse an inexplicable French invasion shot in such a way as to suggest a Gallic D-Day landing (or an attack on Northern England by the New Orleans Saints)*--marking the second time Blanchett's done this exact scene after the admittedly-worse Elizabeth: The Golden Age. All of which is portrayed in so exacting and expository a way in that inimitably stately Ridley Scott style that the picture's bumfuddling 140-minute runtime feels like a couple of torturous days spent at a Renaissance Fair. Maybe it's the complete lack of stakes that hamstrings the production--the surety that no compelling issues will be broached, despite all the posturing about Robin Hood being Thoreau over six centuries before Thoreau (or Thomas Jefferson five centuries before Jefferson) in a deeply stupid town-centre meeting that more closely resembles the Endor council in Return of the Jedi than it does the requisite stirring centrepiece monologue in this prestige epic lost without an awards season.

Or maybe it's the hoary old Robin Hood touchstones this Robin Hood seems dedicated to pulling out of mothballs: ribald rummy Friar Tuck (Mark Addy); the lusty interplay of Little John (Kevin Durand), Will Scarlet (Scott Grimes), and Alan A'Dayle (Crowe record-producer Alan Doyle) and the town's heaving bodices; the attempted rape of Marion by some snarling villain; the impossible archery shot; and the archaic shenanigans of Robin wooing Marion with cocked brows and musty rejoinders. For a reboot, Robin Hood is distressingly like an elderly hew along the status quo--the same complaint levied with currency over every other staid, inert Scott flick from 1492 to Matchstick Men to G.I Jane to Black Rain to Body of Lies. If honesty's on the table, let's just say that the only really good Scott pictures are Blade Runner, Alien, the director's cut of Legend, and the oddly exhilarating Black Hawk Down. When Robin Hood wakes up for a few moments, credit Hurt's penchant for stealing whole films in under ten minutes (see also: A History of Violence) as his Marshal exhibits extraordinary dignity in tendering his resignation from King John's court and spars, briefly, in a corridor with evil turncoat Godfrey (Mark Strong, because Stanley Tucci doesn't take these parts anymore). The complexity he brings to the role of a career diplomat working for assholes several rungs down the evolutionary ladder is fascinating and one not bolstered by Crowe's mopey cipher of a Robin or Blanchett's proto-feminist Marion. A shame, too, that Max Von Sydow as doddering Sir Walter Loxley is given so little to do with a character so ill-conceived that he, at every turn, reminds of Gene Hackman's blind hermit from Young Frankenstein.

Still, there's a reason Ridley Scott movies, no matter how disappointing, often inspire a neutral response. For as bad as they are, they tend to look pretty good--and for as long as his deal with the Devil allows him to continue to draw charismatic actors, films like this never seem as terrible as they should. This Robin Hood is absolutely workmanlike and, worse, occasionally treacly as it devolves into a story about Robin's martyred, socialist Da and the rising up of the ugly people of North England in revolt against their foppish King and his French Queen. The targets are easy and the insights are few and spaced generously, meaning that the only pleasure to be pulled from this thing is to trainspot inaccuracies, which must be plentiful in a Brian Helgeland screenplay that actually has Robin all but declare that all men are created equal with the right to pursue life, liberty of foraging rights, and the pursuit of merriness. If only there were more grace notes like boorish, drunken King Richard (Danny Huston) interrogating Robin about atrocities committed in the name of God before getting a crossbow bolt to the neck, but alas, what Robin Hood has going for it is impressive period detail and the feeling that this movie would've kicked ass had it starred Mickey Rourke instead. What movie wouldn't? Originally published: May 14, 2010.

*That the French inevitably surrender underscores the WWII implications of the action. BAM! return