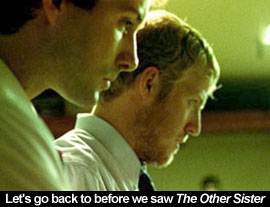 by Walter Chaw SPOILER WARNING IN EFFECT. There's something of the word walls of Gertrude Stein or Eugene Ionesco about Primer, the indie Sundance sensation that would have been rode out of town on a rail if it weren't about time travel in addition to being obscure (thus garnering it nervous intellectual comparisons to La Jetée instead of a more accurate likening to David Mamet-cum-István Szabó). I suspect that a lot of people are afraid to admit they don't understand what's happening in the film, which talks too much in too stultifying a fashion, obscuring its heart of glass with blizzards of expositive candy in the faint hope that people are too dazzled by the rhetoric to ever consider the little guy behind the curtain. Whatever genre can do to fabulize lizard fears into metaphorical eurekas!, it can also lend a pre-emptive weight to flimsy pieces presented for the approval of audiences perhaps unaccustomed to science-fiction. In truth, Primer is more Theatre of the Absurd than sci-fi, with yuppie iterations of Vladimir and Estragon having an endless circular conversation while waiting for a Godot who never really comes. Taken as such, there arises the possibility of seeing the film as commentary on the essential listless, deconstructive jingo-babble of engineers and white-shirt-print-tie professions--though I suspect Primer has a lot more to do with a decision somewhere along the line to make a "what if?" time-travel flick as dense and protracted as possible.

Writer-director (producer/editor/composer) Shane Carruth also stars as tech nerd Aaron, best chum of doppelgänger tech nerd Abe (David Sullivan). Together with two other faceless members of the salaried masses, they gather periodically to try their hand at inventing some gadget that will make them millionaires. Oft compared to Darren Aronofsky's Pi, the film bears a closer resemblance to Robert Connolly's similarly-minded techno-get-rich-scheme/quantum-mechanics thriller The Bank. Essentially what happens in both is that somebody invents a recipe for profiting from the stock market. The Bank's is a mathematical formula, Primer's is a time machine stashed in a rented storage locker and constructed of crap bought from Wal-Mart that's connected to a catalytic converter. It takes half the film to get to the revelation that fungus growing on a child's toy left in the magic box is the accumulation of years instead of hours, and then it takes the rest of the film to carefully comb over the complications of a constant stream of temporal doubles, re-doubling themselves in a weird clone torrent. When Aaron and Abe start killing pre-Aarons and pre-Abes willy-nilly in what appears to be an effort to untie the film's Gordian knots, the issue of identity bravely threatens direct address instead of suggestion.

Primer is unfortunately as inert and disinteresting as the base paint after which it's named--a calling-card picture that believes it's profound when really it's just a hastily-assembled mess of faux populist parts (the $7000 production is so drab that it draws an inordinate amount of attention to its carefully affected unaffectedness) meant to lend an everyman quality to the piece that every other aspect of its execution defeats. It's an officious movie--not pretentious per se (since it doesn't seem to really be aspiring to do anything), but unbearably tidy and pleased with itself just the same. Failing to draw any sympathy for its characters, it also fails to create any tension for their conundrums as handily as it neglects to establish enough motive for the ways Abe and Aaron's semi-nefarious (mostly banal) plans eventually unravel.

The picture runs out of steam early and often, resorting to bizarre jumpings of the shark towards the end with extra machines, surprise Dr. Whos, and that never-good-sign of an interwoven narrative voiceover provided by Carruth's Aaron. It doesn't make any sense, and neither is it intriguingly opaque--you get the feeling that Primer is all about style: a blighted music video set to a tsunami of droning jargon. If you think you need to watch it more than once to "get" it, let me be the first to tell you that there's nothing to get. It's one of those interminable monologues from The Matrix Reloaded as performed by inexperienced filmmakers and actors. If Primer is intriguingly primitive at times, like a lot of garbage hatched up in the middle of the night in the garage, it works a lot better in theory than it does in practice. Originally published: October 8, 2004.

Give a middle school student a thesaurus and look what happens! Clearly, *very trying* pseudo-intellectuals' post-modernism and movie reviews don't mix. Sorry if the movie went over your head - maybe you should stick to the Twilight series.