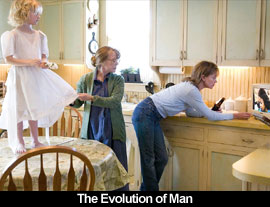 by Walter Chaw North Country is a sensationalistic, pandering film that crafts from a landmark legal case a cinematic martyrdom the equivalent of Christ's and Joan of Arc's rolled up into the noble, trembling lips of Charlize Theron (who once had the temerity to chastise the press for focusing on her appearance in Monster whilst wearing a see-through, painted-on size-4 gold dress). I'm not decrying the stunt-casting of a statuesque blond in the role of the tiny Minnesotan mine worker the life upon which this film is ever-so-loosely based, nor am I begrudging, per se, the natural instinct of Roger Ebert and the Academy to foam over turns like this from starlets undergoing extreme make-unders. No, what I really don't like are movies like North Country that fudge humanity in all its ugliness and imperfection so tragically that the real issues of the picture end up looking like one of those glossy fashion mag covers Theron will grace as she embarks on her promotional turn. According to the world of North Country, it's not terrible enough that awful things happen to a real live person--no, awful things have to happen to Mother-freakin'-Teresa.

Pure silk streams out of Josie Ames's (Theron) ass. She's a single mother of two--thirteen-year-old son Sammy (Thomas Curtis) and cipher of a daughter Karen (Elle Peterson)--who has "done nothing but bring shame" upon her parents Hank (Richard Jenkins) and Alice (Sissy Spacek) by allowing herself to get the crap beaten out of her by her Neanderthal sketch of a soon-to-be ex-husband. During the bizarre (and embarrassing) courtroom melodrama that serves as the film's framing story, her hockey star attorney Bill (Woody Harrelson) will object to an exhumation of her sexual history--but by the time people have finished standing up in the gallery in a show of Dead Poets Society moral support, it's evident that for director Niki Caro and screenwriter Michael Seitzman, that Josie's sexual history be clean as the driven snow means absolutely everything. There's a bad missed opportunity here to present the story of a deeply flawed woman who slept around with some of her married co-workers and earned the mistrust of a few of her female peers for being too "girly" for the job of cleaning industrial sludge off mining equipment. I guess in the actual class action suit--and before I get too far ahead of myself, North Country ostensibly deals with the first class action sexual harassment lawsuit brought against a major Union company--a few of the women actually testified against the whistleblower. Boy, would I have been interested to see that movie.

Understand that this is not a defense of sexual harassment in the workplace, but rather a rhetorical question as to whether it's less egregious an offense if the victim isn't up for sainthood. Jonathan Kaplan's The Accused took a few brave stands, I think, in casting its victim as a flawed person we'd like to look down upon but who, despite her provocative attire and flirtatious gestures, still didn't deserve to be gang-raped atop a pinball machine. What North Country does instead is pile on the piety with giant brick-laying slops, even pausing for a moment for the mother figure played by Spacek--perhaps the most decent-seeming actress of the last forty years--to make an antiquated stand for the plight of the housewife: "Maybe I should charge you for all the loads of laundry I do!" It's sort of like Pleasantville where the kids introduce the parents into twentieth-century ideas about gender relationships, except that North Country isn't set inside a 1950s situation comedy.

Incidents of rabid machismo accumulate at the mine (as to be expected, though, the offenses detailed in the actual case are considerably more egregious), with the initial salvos against the women taken in stride until the writing-with-excrement on the wall and the tipping of portable toilets becomes epidemic, pushing noble Josie to the stand. A villain is proffered in childhood boyfriend Bobby Sharp (Jeremy Renner), who, as he's pushed to spill some rancid beans with the classic attack of "you're a homo" (backed with a string of sports analogies from Harrelson's jock character, woefully underutilized in a film taking place in hockey-mad Minnesota), to pass time until it's crystal clear that even though Josie is crying rape on the stand as explanation of her first child's conception, the evil defense team is incapable of making the leap that this is the perfect opportunity to impeach this witness for maybe always crying rape. Just the fact that they bring in a super-secret surprise witness seems to indicate that this is the tactic they'll take--but because the film doesn't trust its audience even a little, Josie's virtue is never in question and the proof of her violation is finally the catalyst for the fence-sitters to grow a little backbone.

What we ought to be asking ourselves throughout is if it matters whether Josie is a miserable parent (she isn't; we're reminded she's a saint constantly, particularly in a scene where pal Kyle (Sean Bean) acts the dad for wayward Sammy by decrying adoption), an alcoholic, a slut, an idiot, a disgrace, a person we'd like to look down on for any number of reasons: Does she deserve to be sexually harassed in her workplace? There's a disturbing conversation to be had here about why the corrupt judge of the real case is replaced by a justice-loving curmudgeon--and, better, how it is that this film revolving around women's rights in the workplace is fought and won by men acting like boys, swooping in to rescue their damsels in distress and accusing one another of being girls while the actual girls sit around crying. The only characters who need redemption and experience growth in this picture are the father, the lawyer, the son, and the bully, no?

That being said, North Country finds Frances McDormand reprising her Fargo accent as a terminally ill pal given the best utterance of "fuck you" in years, poised as the best single moment in a picture so dedicated to drumming up faux-outrage that it actually manages, with no little irony, to inspire a lot of outrage towards it. It's a picture that doesn't respect you very much and so presents to you a beautifully-painted, one-dimensional piñata it then proceeds to knock around for a couple of high-falutin' hours until you're showered in a welter of righteous candy. The movie that an ugly fight about an ugly issue deserves is one weighted with more complexity and intention than podium-highlight monologues on noble causes that nobody in their right mind is arguing against in the first place can provide. After all the women of the Eveleth Mining Company went through to prove their toughness and perseverance, what a shame that North Country comes along to turn them back into a parade of indistinguishable porcelain dolls: flawless and inert. Like Oscars, now that you mention it, given now as ever to rewarding the kind of insulated middlebrow safe that pays lip service to the disquieting. Originally published: October 21, 2005.